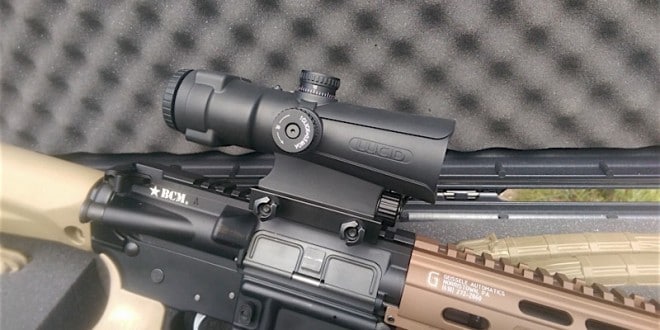 The new LUCID P7 Prismatic Combat Optic is now shipping to distributors and should be seen out and about in the wild now and/or shortly. LUCID was generous enough in their hustle to get this new scope to market to send one out in a little box in my direction.

Many of you read my initial impressions and evaluation plan a couple weeks ago and as promised I put this P7 against the most arduous and proven competitor I could muster, the Trijicon ACOG.

So let’s break down both optics and see what we have.

As stated in my preview article the P7 doesn’t have a large field optics in its class and the above numbers and features are desirable and satisfying for its intended role.

Now as we crunch the numbers the ACOG sports several that outshine the P7. But let me force some final perspective on the optics.

With that $1109.00 disparity in mind I can kit 3 rifles with a P7 per one ACOG or buy a nice rifle, an Armalite SPR perhaps, and a P7 for the retail price of the TA02 standing alone. There’s significant appreciable value there.

Now, as an ACOG user and owner (previously reviewed), I can say the ACOG is worth every penny. But 110,900 extra pennies is a lot of pennies… literally 611lbs 3.7oz of extra pennies. Oye…

The control layouts on both optics are simple and effective.

The P7 has a three button control pad on the left side of the housing and stores the AA battery in the base. The power button also sets the illumination mode from manual to auto brightness adjustment. The + and – set your manual brightness settings and are disabled when in auto brightness mode. The scope retains the last setting it was on when you power it off. Being an etched reticle means using illumination is optional and the fine center dot of the P7 reticle makes a fine point of aim on its own.

The TA02 houses it’s battery on the optic’s right side in an added on housing. The rheostat is on the left and consists of a simple dial that clicks between your numbered brightness settings and the off positions. Simple. The TA02 also sports an etched reticle making the illumination optional.

Now without further ado, to the range!

I couldn’t use a TA02 to compare with the P7 side by side, the misfortune of limited ACOGs just lying about. I do have my TA31 ECOS which differs only on method of illumination from the TA02. The field of view and eye relief of all the 4×32 ACOGs are rated identically so I can expect comparable results when I’m looking at target acquisition.

LUCID’s P7 topped my AR15. A fixed stock build sporting a Geissele SMR freefloat handguard over a Bravo Company 1:7 16” 5.56mm barrel. The trigger is ALG Defense’s (Also Geissele) ACT. The rifle is a gem, basically my concept of an “M16A5”. Whenever the Marine Corps. Gets around to that iteration I’ll see how far off I was.

The TA31 ECOS sits on top of my FNH SCAR17s because that’s where it belongs. By far my favorite rifle set up.

I benched my P7 topped AR on my bag and set a Shoot-N-C target at the end of the 25m bay. Dialing in the focus was simple and the LUCID P7 sports clear clean glass, no surprise. The ideal “eyebox” area is 2 inches behind the ACOGs so I took a moment to play with it and adjust.

Next came the illumination. The center dot of the P7 reticle, the ring, and the three sharp angled arrows all came alight to contrast the target down range. Even in the bright cloudless July afternoon while I was under the shaded overhang I could get useable contrast from both the automated and manual brightness settings. The most practical settings I found were a high manual setting like 8, 9, or 10 and then using the automated setting as the standard. If I was seeing the reticle to dimly on automatic a quick tap of the power button would give me a heightened brightness level to compensate. Once I was back in a more favorable light setting between my position and my target down range I could tap again back to automatic. I never felt the reticle was over bright or able to bleed over the targets, if anything LUCID could err on a little brighter. The LUDIC HD7 Red Dot is noticeably brighter but it also features a projected reticle, not an etched one. There was no light and/or shadow combination I could put together that made the scope unusable.

Satisfied with the illumination I loaded 5 rounds and sent them down range.

Impacts fell into a little cluster on the right edge of the Shoot-N-C disk. From here I tested the elevation and windage adjustments on the turrets. Cranking them left and right, up and down, counting clicks and firing groups. Each shift in impact was as it should have been at half an inch per click at 100 yards, four clicks for the same half inch at 25.

So far the P7 had performed the basics and zeroing just as handily as the ACOG could. Clarity on both the optics made deliberate and rapid shots on the bench with my bag as support a rudimentary drill.

Target acquisition and rapid effective engagement are the hallmark characteristics I’m seeking now. To that end I grabbed my shot timer and a set target at 25 meters. Standing at that distance I would shoot a Failure to Stop sequence, sometimes called a “Failure Drill” consisting of two rapid center mass shots and a head shot to stop an advancing hostile threat. 25 meters is actually beyond the traditional distances for a Failure to Stop, this drill is usually shot at 10, 5, or even 3 meters. I wanted to push the P7 and myself, both needed to perform.

After several repetitions the results began to show my baselines. My slowest time during my earlier runs was a 1.91 seconds time on target for the first shot with a total of 2.66 to get the head shot off. I was slow off the timer, not paying full attention since a friend was on the range with me talking. Not an excuse, a fairly realistic less than prepared response. This is a practical real world time, and still a good result.

My average on the P7 was 1.55 time on target with a finish time of 2.16 to complete the headshot. My best was a 1.21 with a 2.01 overall. The P7 is fast, it comfortably fulfills its role getting me on the target each time I was called to do so and at a greater distance than my shooting comfort zones are formed around.

Next came the perspective. The P7 was showing its colors strongly with no gripes worth mentioning, it was doing what I asked. But now I put the warm well run AR15 down to rest and cool, up came the FN SCAR17s topped with the TA31 ECOS. This is my favorite rifle, its wearing my favorite and most familiar optic. TA31s have been on my rifles shooting these drills for over eight years with the Marine Corps and before that I was shooting these drills with iron sights. The ACOG is home turf.

I reset the timer, waited, fired…

The results were telling.

What is it that Magpul says? Unfair Advantage

That’s how I chalk up the compiled data. The P7 did fine, splendid actually. But I asked it go against my preferred rifle with my preferred optic, both of which are top tier category items. The ACOGs wider field of view and my familiarity with it carried it and the SCAR it sat upon to excel in the comparison. Additionally I was fully warmed up to the shooting drill. The SCAR/ACOG combination had an unfair advantage. I love those when it comes to combat oriented rifles and optics, no shame.

LUCID’s P7 Prismatic Combat Optic accomplishes everything I can ask for out of an optic geared toward rapid target engagement. The P7 reticle is fast onto the target and can be used for range estimation and hold over for any caliber (Use of the Strelok+ app speeds that feature up immensely). The adjustments are accurate. The glass is clear. The illumination is useable and simple to function with appreciable battery life, 2500 hours is longer than the average work year at 40/hr weeks.

The only way I can touch a discernably better optic is by nearly quadrupling my cash output.

The P7 would find a useable niche on any of my rifles, any home defense rifle, or police patrol rifle. It may sit on all of my rifles at some point in time or another.

LUCID, you did well.

You can purchase from a local retailer or direct from LUCID.