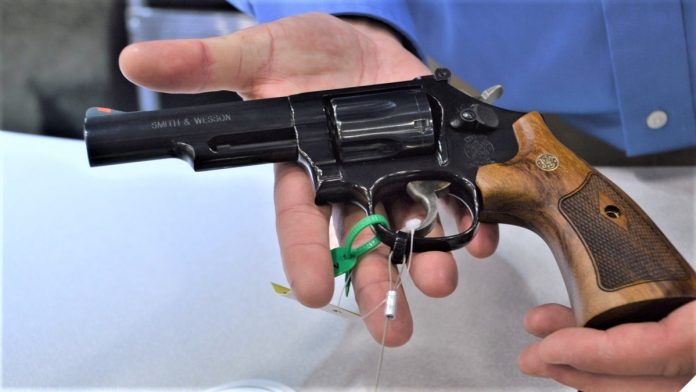 The LA County Sheriff is dropping the number of inmates in his care by a variety of means and doesn’t think the public should be buying guns. (Photo: Chris Eger/Guns.com)

The Los Angeles County Sheriff is doing all he can to limit the number of inmates behind bars during the coronavirus outbreak while telling residents that buying guns is a bad idea.

During a press conference on Monday at the Hall of Justice, Sheriff Alex Villanueva said his Department has reduced the jail population by over 600 in the past two weeks by releasing some inmates early.

Additionally, the Sheriff cut the number of arrests after he raised the bail amount for booking inmates from $25,000 to $50,000, which allows more suspects to be released with a citation, rather than be taken into custody. This latter move has dropped daily intake from a typical average of about 300 new guests at the county’s jails to around 60. According to the county bail schedule for Los Angeles, crimes such as assault with a deadly weapon and vehicular manslaughter have a bail of less than $50,000.

In the same conference, Villanueva admonished LA County residents to not obtain the means to defend themselves and their families during the crisis, saying, “Buying guns is a bad idea.”

It would seem that some Angelenos would disagree, as reported by LA Magazine, “All across Los Angeles, from Culver City to Burbank, gun sales are booming.”

The LASD, which has the largest county jail system in the country, had 16,459 inmates counted as of Monday.