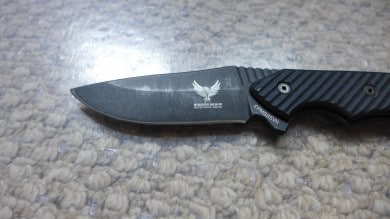 I reviewed the Freeman Outdoor 451 last fall, and since then I have had the chance to not only use it some more, but also compare it to some really great competitors–namely the Ka Bar BK9 and a custom fixed blade. The 451 still ranks as one of the better fixed blades I have used.

I was a long time resident of the chopper camp in the fixed blade world. I didn’t see the purpose in a small or medium sized fixed blade, as that role could be better filled by a more space-efficient and pocket friendly folder. Since then, and largely because of the 451, I have changed my mind. The 451, at 4 inches, can do many of the tasks a large chopper can do, though not as efficiently, but it also can handle chores too rough and tumble for a folder.

This spring we did a lot of yardwork and it was the perfect time to test my fixed blades. One task we did was particularly hard on a knife–removing seven large taxa bushes and planting new bushes in their place. This was a perfect test for a fixed blade. The sandy, cold dirt would have obliterated even the toughest pivot on a folder, but my fixed blades just needed a wipe down afterwords. In cutting roots and branches, the size of the 451 gave me enough mass and heft to really bear down on the blade, but I still felt like I was in control, unlike with the bigger 9 inch blade on the BK9. Cutting away the root balls and plunging the knife through dirt, burlap, and tangles of plant material was a real test for the edge. My custom fixed blade runs 1095 and it was butter knife dull at the end of the day. The 451, which runs S35VN, was still sharp. It wasn’t shaving sharp, but it would bite in to wood quite well. Overall, I am very pleased with the blade shape and the steel.

The blade coating, while not destroyed, shows obvious wear.

It’s not that it has fallen off, but merely that it has scratches and actually has smoothed out over time. It no longer has that thick bumpy top coat.

Additionally the sheath has held up quite nicely, but also shows some sign of wear. Some of the rubber tabs have stretched out and one as a few superficial cracks. The blade itself is still sharp, and because it is S35VN it has been marginally easier to sharpen than S30V and it has chipped out less. The knife has worn well over time and with moderate to maybe hard realistic use. I haven’t abused the knife at all, I just don’t find that sort of testing useful, but I have thumped on the 451 and it has taken the beatings with aplomb.

There are two things I would note about the knife that heavy and long term use as shown me. First, the handle shape is great, but the handle scales themselves are not superb. Slab handles, even with significant traction grooves, are not as good in the hand as something like the Becker handle as seen on the BK9. A full three dimensional handle would be better than slab construction. That said, this issue really only came up in serious and prolonged chopping. It was a non-issue during most tasks.

Months later the Freeman Outdoor Gear 451 4″ fixed blade has been a great performer and I knife I am happy to have in my arsenal of gear. I know that choppers are all the rage, and that they can perform impressive cutting tasks, but a 4″ is plenty big and much more controllable. If I could only have one knife, I’d rather have a knife this size than a big chopper, but the beauty of the Golden Age of Gear is that we don’t have to face daunting choices like that.