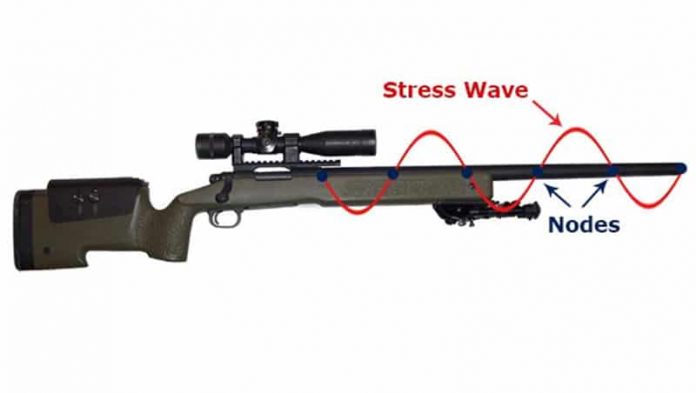 Are you getting the most out of your long range precision shooting rifle? In this part of our series, I’ll start talking about long range rifles: how to select them, and how to improve their performance. Let’s start by discussing inherent accuracy and the main factor that determines it: barrel vibration.

The inherent, or intrinsic, accuracy of a rifle is its ability to shoot tight groups.  It is gauged by measuring the average group size at a given distance, usually 100yds or 100m, and is measured in MOA. It is measured as an angle because, in theory, if a rifle is capable of shooting 1MOA groups at 100yds, then it is able to maintain that angular spread at all distances. This is only the theory though. In practice, the spread widens as the distance lengthens. Occasionally, the grouping spread may be wider at shorter distances, due to dynamic stability issues, but that’s an exception to the rule of thumb. In general, measuring the group spread at 100yds is a good way to predict the accuracy of a rifle.

But what makes a rifle accurate?

Ammo quality and consistency have a lot to do with the level of accuracy you can achieve, but I will talk about it in a future post. For now, let’s just concentrate on the rifle.

The first thing you need to know is that when you shoot, the rifle is not static. The rifle begins to react to firing the ammunition as soon as the powder begins to burn, as it’s ignited by the primer. The highest level of chamber pressure is reached in the first instants after the powder ignition. The graph to the left shows the acceleration, in G, of the rifle under the effect of that peak of pressure. On the X-axis there is the travel of the bullet, in inches, while on the Y-axis there is the amount of acceleration. As you can see, the highest acceleration occurs before the bullet has even traveled two inches.  This acceleration, and the force of the bullet traveling through the bore, both result in barrel vibration.

Barrel vibration affects the overall accuracy of the weapon system because it changes the way the bullet leaves the muzzle. This produces shifting in POI (point of impact) from shot to shot and, and consequentially, causes grouping spread on the target.

There are two different theories about the barrel vibration, both with observable confirmations in real world.

The first theory I call the theory of the harmonics, assumes the barrel vibration causes a weaving movement of the barrel, with the muzzle weaving and the line of departure shifting from pointing upward to downward at a constant ratio, or frequency. The barrel acts like a plucked guitar string as a chord is strung or, since it is tied only at one end (to the receiver), like a ruler positioned at the edge of a table.

The second theory I refer to as the stress waves (or acoustic waves) theory. This theory explains barrel vibration as a result of stress waves generating a shift in the bore diameter rather than an upward/downward movement. The change in bore diameter at the crown (that is, the final part of the bore, at the muzzle), produces shifs in POI.

We can take advantage of understanding these two barrel vibration theories when selecting the optimal weapon for our needs, and/or to improve the accuracy of the rifles we already own in the following ways:

First, we know that if the barrel is not free to vibrate, the way the muzzle moves will become unpredictable which, subsequently, causes the POI shift to be unpredictable as well. That’s the reason why it is crucial that the barrel of the rifle must not touch anything during the shot. The barrel must be free to vibrate along its entire length, without touching the forend of the stock. Really, nothing should touch the barrel, stock, accessory, or otherwise. Only in this way will the vibration, and therefore the POI, will be consistent from shot to shot.

Third, we know that during the vibration there are very short (microsecond) time lapses where the condition of the barrel is static. These spots in the vibration wave are called nodes. If every bullet left the muzzle at node intervals, the POI shift from shot to shot would be minimal. This goal can be achieved by working on the bullet’s barrel time, making it shorter or longer (adjusting the powder charge weight) to make the bullet exit when the barrel wave is at a node. Other options involve cutting the barrel to a specific length, to match its vibration with a particular ammo, and/or adding a weight on the barrel or at a pressure point to adjust the vibration.

Understanding barrel vibration and optimizing your barrel and ammo with the barrel vibration theories in mind are some ways to get the most out of your rifle’s inherent accuracy. But, we’re not done fine tuning, yet. In the next long range shooting article, we’ll put this knowledge into practice and see how we can improve the accuracy of a standard bolt action rifle.