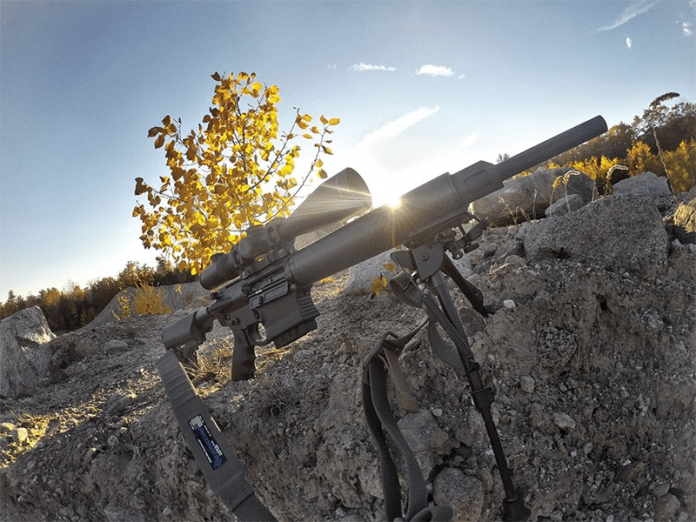 At first glance, the new DPMS GII Compact Hunter rifle may resemble other AR-10 platforms, but it’s immediately obvious when you pick one up that this gun is very different. The first thing you’ll notice is the rifle’s weight—or rather, its lack of weight.

The Compact Hunter weighs a mere 6.9 lbs., which makes it one of the lightest production AR-10 rifles around. It’s a featherweight compared to most AR-10s, which weigh 8 to 10 pounds and are about as much fun to carry on a hunt as packing an anvil. This rifle’s weight puts it squarely in the running as an everyday hunting rifle, but also gives it great utility for tactical applications.

To get to that weight, DPMS reengineered the AR-10 platform to benefit from smaller-diameter and shorter-length upper and lower receivers, which are forged from 7075 T6 alloy. Dimensionally, apart from its necessarily longer magazine well, the rifle is quite close in size and conformation to a Remington R-15 (.223 Rem.) Carbine I own. Additional weight is shaved from the rifle with the use of a .223-sized, forged 8620-steel, monolithic bolt carrier. A new-geometry bolt, made of Carpenter 158 steel, allows for use of a newly designed, smaller barrel extension, which in turn allows for the A3 type upper receiver to be smaller. All of these changes are designed to reduce weight while preserving strength where it counts. The firing pin is titanium.

Most of the remaining weight savings come from the partially fluted 16-in. stainless steel barrel, low-profile gas block and a .223-sized carbon fiber handguard. Of course, stuffing an AR-10 into an AR-15 package naturally raises questions of reliability and durability. DPMS has taken special care to address these concerns in a number of areas.

The ejection port has been enlarged, forward of the improved shell deflector, and there’s a fully functioning forward assist. The bolt carrier incorporates an integral gas key tower, rather than one held in place with screws, and a removable gas key extension.

The extractor is an entirely new design, made of a metal which DPMS says is nearly impossible to break. The extractor uses a novel, elastomer extractor spring which the company says has proven, in testing, to be more durable, reliable and resistant to environmental effects than conventional springs.

DPMS says the spring can handle temperatures from -60 degrees to 650 degrees F.

Anyone who is familiar with a standard M4 or AR-15 will feel right at home with the controls on the rifle, which are in the usual locations in the usual configuration.  All DPMS GII rifles accept standard AR fire controls, making it easy to customize as you wish. GII rifles also have a newly designed barrel nut which increases compatibility with more two-piece and .223-sized free-float handguard systems. The rifle has a Hogue pistol grip, with finger grooves, and a B5 Sopmod stock with an anti-slip rubber recoil pad, a single stainless steel QD swivel mount and two molded QD sling receptacles. Overall length is adjustable from 32.5 to 36.0 inches. The lower receiver incorporates a generously sized, integral trigger guard and beveled magazine well.

For testing, I mounted a Trijicon 4-16x50mm AccuPower scope (trijicon.com) in and ADM quick-release mount (americandefensemanufacturing.com) on the Compact Hunter and tested it with five factory hunting loads, rather than match loads, to see how the rifle would perform in the role it was designed for.

Functionally, the rifle fed, fired, extracted and ejected without issue. There are, however, a couple of things I’d change on the rifle, mostly due to personal preference.

The first is the bolt catch.  Initially, it would not lock back consistently when shooting one load. Closer inspection revealed that the bolt catch was binding slightly and failing to raise the shelf high enough to engage the bolt. I opened the rifle up and worked the mechanism up and down manually for several minutes, and that completely cured the problem. Still, I would likely swap out the bolt catch for something like the DPMS tactical-style catch, with twin paddles, which I prefer over the pointy release button on a standard catch.

I would also probably change the trigger, which I frequently do on ARs. From the factory, the rifle comes with a two-stage DPMS trigger that broke consistently at a pull weight of 5 lbs., 2 oz, with a barely-perceptible hint of creep on a very slow trigger pull. It’s a perfectly acceptable trigger for most applications, but I prefer hunting triggers to be a couple of pounds lighter. With light rifles, especially, an unnecessarily heavy trigger pull can adversely impact accuracy, and I’m confident groups on paper would shrink with a lighter trigger.

Even so, the rifle shot pretty well with the factory trigger. Average groups at 100 yards were around an inch and a half for most of the tested factory hunting loads, and that will definitively get the job done in most hunting situations. Two of the tested loads turned in sub-MOA best groups, hinting at the rifle’s true accuracy potential.

Velocity testing yielded a couple of surprises at both ends of the spectrum. You would expect some velocity drop-off from the rifle’s 16-inch barrel, but I was initially surprised that Hornady’s American Whitetail 150-grain. Interlock load showed a whopping 306 f.p.s. loss from factory-claimed velocity. I then remembered that Hornady uses SAAMI-specification test barrels, which are mostly 24 in. for rifles, so that handily accounts for the difference. At the other end of the scale, Federal’s new 150-grain Fusion MSR (Modern Sporting Rifle) round was only 68 f.p.s. slower than factory-stated velocity out of the rifle’s shortened barrel. That’s because the MSR ammo uses faster-burning powders to achieve optimal velocity out of the shorter barrels typically employed on AR platforms. If you take these two loads out of the equation, average velocity drop from factory-stated velocities for the remaining three rounds was 152 f.p.s, which isn’t enough to get worked up about at average hunting distances.

Some have opined that a lightweight AR chambered for .308 Win. ammo results in an objectionable amount of recoil. That wasn’t my experience with this rifle. I hardly noticed the recoil in two days of high-volume shooting, and I would gently suggest that anyone who finds the recoil objectionable probably hasn’t spent much time shooting anything more potent than a .223. Contact DPMS, Dept. OT; Tel.: (800) 578-3767; Web: www.dpmsinc.com