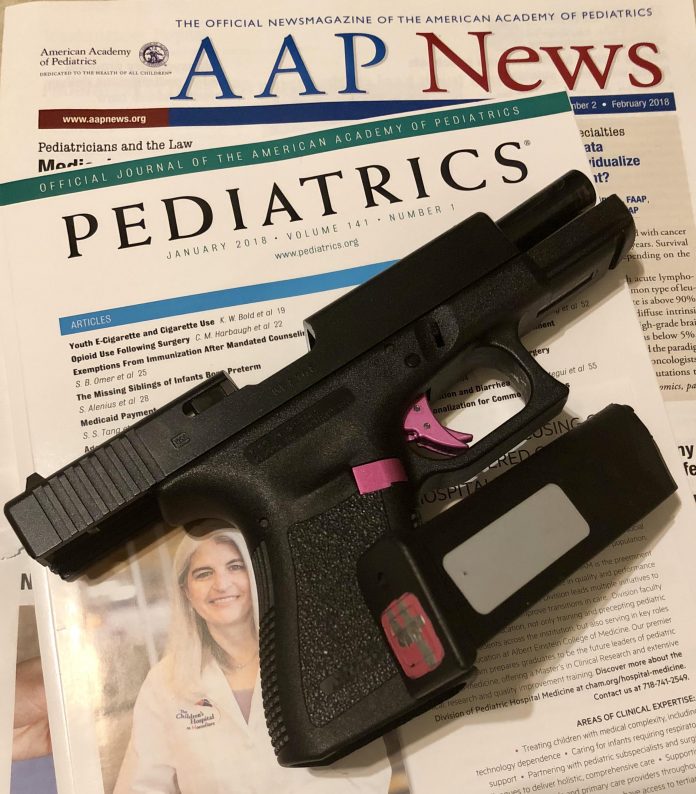 Sometimes, life as a pediatrician AND firearms enthusiast can make me feel as though I am some sort of double-agent. That feeling becomes magnified when it comes to political activism.

For those who may not be familiar, my professional society – The American Academy of Pediatrics (AAP) – is rabidly anti-gun. This link connects to their 2013 policy recommendations.  https://www.aap.org/en-us/advocacy-and-policy/federal-advocacy/documents/aapgunviolencepreventionpolicyrecommendations_jan2013.pdf

Despite the stance held by my organization, I personally have managed over the past nine years to become a safe and accurate shooter with semi-auto pistol, revolver, semi-auto rifle, and shotgun. I participate in local matches and have made friends all over the country because of the shooting sports. I’ve sought out additional instruction – attending classes from Kay and Jerry Miculek, Kathy Jackson of the Cornered Cat, and even Gunsite Academy. Last year I obtained my NRA Basic Pistol Instructor credentials. I am almost as serious about my firearms training as I am about my continuing medical education.

Yet, I work very hard to keep these two parts of my life as separate as possible. I don’t mind if my gun friends know what I do for a living, but I’d rather my shooting hobby not become well known (or even notorious, given my sometimes scathing online rants) amongst the medical community. I am frankly afraid of professional push-back.

As an illustration of my frustrating situation I received an email update last week from my state citizen gun rights group regarding some upcoming legislation involving campus carry. The email urged me to contact my legislators in support of the bill.

In the very same batch of email, I received an urgent message from my state chapter of the AAP with a headline of “Protect our Children!” (Yes, literally). This urgent notice begged me to contact my legislators to protect the state’s college students from dangerous guns on campus. A link was provided to propaganda from Moms Demand Action.

The names included in the letter were physicians I trained under in residency, who are well-respected in the state and at the University medical center.

It is incredibly hard for me to accept that these respected physicians can be so ignorant, and blind to hard data. Let alone so susceptible to propaganda. I had to grit my teeth and vent to some friends, to keep from replying to this letter with the blast of rebuke it deserved. That would have been a career-ending move for me. It was incredibly frustrating.

This is the oxymoronic position I exist in.

Don’t get me wrong – I have great respect for these physicians in a professional capacity, but their obvious blind spots when it comes to firearms frustrate me to no end. Especially when they buy into and promote propaganda from the “Demanding Mommies”, without any critical analysis whatsoever. In my mind, that’s almost as bad as if they’d let Jenny McCarthy be their vaccine spokesperson.

I’m feeling the kind of disappointment one experiences when first realizing that one’s parents are not omnipotent, but are merely human beings with faults of their own. It makes me sad as well as frustrated.

Contributing to my frustration is my inability to speak out publicly against this kind of academic medical propaganda. These people are well-respected in the state medical community and are highly placed in the large state academic medical center. My voice means nothing compared to that and speaking out publicly would put an end to my professional reputation, and therefore my career and livelihood. It leaves me grinding my teeth.

But all is not lost. A few years ago, I became a member of Doctors for Responsible Gun Ownership, which is a project of the Second Amendment Foundation. DRGO is a group of physicians and other health professionals who work to dispel the myth that firearms are a public health hazard. In them I have found kindred spirits.

I am not the only physician who shoots. There are many more of us than most people realize – of many ages and specialties. The challenge lies in encouraging these professionals to find their voices and stand up to the misguided and emotion-driven propaganda of Organized Medicine.