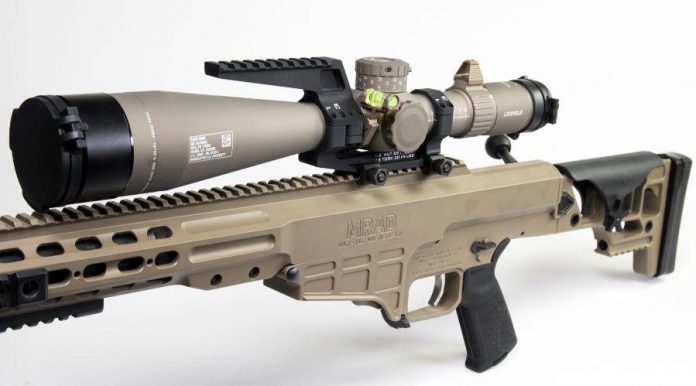 Leupold’s Mark 5HD 5-25×56 will be provided in a flat dark earth coating and utilize the Army’s Mil-Grid reticle. When mounted on the Barrett MRAD, it will be the standard day optic for the new MK22 PSR. (Photo: Leupold)

Oregon-based Leupold announced they have been selected to provide the day optic for the U.S. Army’s Precision Sniper Rifle (PSR) program.

The PSR, dubbed the MK22 Mod 0 in Army service, is based on the Barrett MRAD bolt-action multi-caliber system chambered in 7.62 NATO, .300 Norma Magnum, and .338 Norma Magnum. The glass of choice on the new platform, used by SOCOM, will be Leupold’s Mark 5HD 5-25×56, complete with a flat dark earth coating and the Army’s patented Mil-Grid reticle.

“The Mark 5HD has been built from the ground up to deliver the unparalleled performance that the men and women serving our country overseas require,” said Sam Horstman, Director of Military Sales for Leupold & Stevens, Inc. “And, like all of our optics, the Mark 5HD has been strenuously tested for durability and fully meets the extremely high standards that the military demands. Our Soldiers need their optics to perform, and we’re glad to be able to offer a solution that’s built to deliver on those expectations.”

Waterproof, fog proof, and guaranteed to perform, the Mark 5HD series is backed by the Leupold’s Lifetime Guarantee. Designed to max out the performance of long-range rifles and ammo, the models incorporate tactile, audible click adjustments, larger numbers, and a high-speed throw lever. (Photo: Leupold)

Leupold says the Mark 5HD has been “crafted to redefine accuracy, precision, and optical performance for long-range shooters.” Available in three models – a 7-35×56, 5-25×56, and 3.6-18×44 – with both millirad and MOA configurations, the series are billed as being up to 20 ounces lighter than other scopes in its class while bringing superior edge-to-edge clarity and extreme low-light performance to the table.

Like all of Leupold’s riflescopes, the Mark 5HD is designed, machined, and assembled at their Beaverton, Oregon, facility.

More on the MRAD

When it comes to the MRAD, Tennesee-based Barrett last year pulled down a $49.9 million five-year contract for a modular advanced sniper rifle platform. The program itself was identified in SOCOM’s FY19 budget justification book as part of an effort to continue “development of enhanced capabilities to improve performance” of “individual sniper weapons to engage out to 1500 meters.”

A bolt-action rifle with a monolithic upper receiver that is available in a range of calibers including all those mentioned in the military’s solicitation, the MRAD has caliber conversion kits for the MRAD use a separate barrel assembly and bolt. The Barrett bolt gun has been spotted in the hands of several international sniper units to include the Israeli Defense Forces and Norwegian Army.