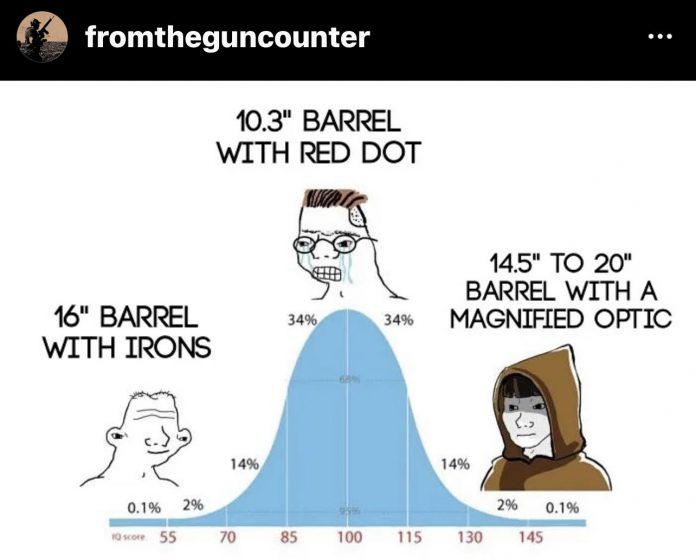 FromTheGuncounter is an excellent Insta page and if you aren’t following them and are on Insta, fix yourself. Run by a lawyer who does part time gun counter stuff. The memes are wise and informative.

This struck me particularly as, even as we drift back toward slightly longer barrels in AR’s, people still tend to confuse and misattribute capabilities in rifles.

When the Army switched to the M4 and then later the M4A1 (a very much improved M4, not just full auto) the Marine Corps stubbornly refused. Some of this can certainly be attributed to things like ‘tradition’ or institutional inertia, but there were two poignant facts that made the choice make some sense (especially if they had followed through on the A5 project).

The M16A4 had (since the M4A1 PIP’s it has evened up) a lower stoppage and failure rate than the M4, and it has superior terminal ballistics and range due to the higher muzzle velocity.

Velocity is crucial in kinetic weapons, the less you have the smaller your working envelopes are on your weapons for desired effects unless you have another energy medium (like a high explosive in a mortar).

Short barrels are all the rage. The 10.3″, then later improved gas 11″ and 11.5″ guns are excellent at what they are for, CQB. The CQBR’s and derivatives of the MK18 in military, law enforcement, security, and private hands are specialized for closer fights.

“But, Keith!” You shout from somewhere across the internet, “We’ve seen short guns score hits out to 700 and even 800 yards in some instances. Surely this means they aren’t range compromised.”

Well, kind Reader, you are correct if your only goal is to impact the target. If you goal is to instead reliably wound or disable the target, you have an energy metric that your weapon must adhere to in order to deliver.

You see, sometimes we fail to differentiate between an impact on a target (be it a hole in paper, ringing a steel plate, or even causing a wound) and delivering the required energy to cause enough damage to terminate a threat.

For most of us, this only matters in an abstract way. Our realistic shots will be taken at interior distances within a home. This is a distance the 10.3’s and other smaller platforms excel at. Even then, however, longer barrels deliver better effects on target with most ammunitions because more speed improves the terminal ballistic effects that produce a stop on the target with the composition of the round. What the rounds are made of (Lead, copper, steel, or combinations) deliver better desired effects at higher speeds. Some are specially engineered for lower speeds (subsonic .300BLK) but there is usually far more benefits and far fewer detriments to increasing those velocities too.

For these reasons I run a bullpup SBR house gun with a suppressor, it is the best compromise of features for desired effects (in my opinion).

So when we are talking about effective range, we need to discuss intended targets too. Is it steel? Or are we talking putting down a living breathing target that may also be threating our lives? What spaces do I need to be able to do that in? And do I have an effective method to help me succeed.

Cops have to ask these questions at much greater distances than most average EDC’ers. They need to know things like the longest hallways in their school district, the longest and largest retail interior spaces, and they need to know these things in conjunction with what they can do with their long guns. In addition, they are highly likely to have ‘no shoots’ involved, be they hostages or bystanders. It is a terrifyingly complex equation and warrants considering terminal effects out of longer barreled guns to increase an edge instead of going with a smaller platform that is ‘popular’ online. Certainly the longest possible shots an officer might be in a position to need to take aren’t the only considerations, but they are absolutely crucial ones.

Cool guys in cool kit are cool, but a cop with a Colt 6920 and a decent 1-6 who can hit a hostage taker at 143 yards because they know that gun and those rounds is the real deal. That is the crucial point. That same officer might need to take that gun to 300 yards or further depending upon their jurisdiction. Knowing our environment helps push us to the best gear choices.

So, if you are building a rifle out to do 300, 400, even out to 800 yards, don’t compromise on barrel if there is no requirement to. Lengths of 14.5-20″ might be the ‘old ways’, but it maximizes what you send to the target. Part of me is still convinced, despite how much I like the M27, that the Corps would have been extremely well served completing the A5 project and going to freefloat 20″ guns with adjustable stocks.