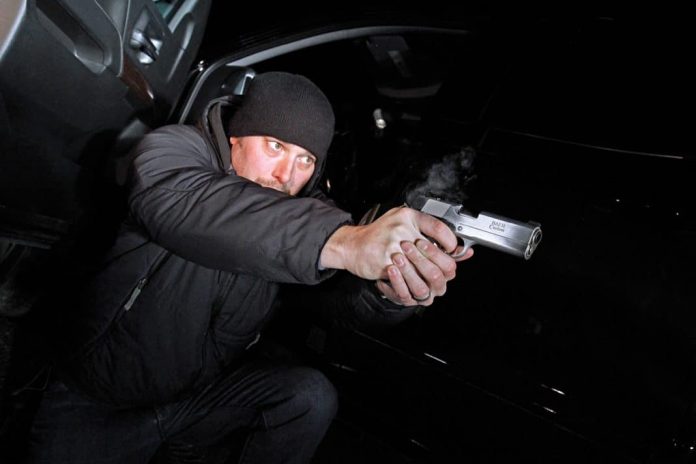 When Colt came out with their CCO pistol in the 1990s, the 4.25” Commander barrel/slide assembly atop the short Officers ACP frame, Ray Ordorica wrote that he considered it the ideal 1911 .45 auto for concealed carry. I’ve never found a good argument against that, and soon found myself with a pair of the aluminum frame CCOs in my own gun safe. Later, I found that the Nighthawk Custom’s similar T3 in its original steel frame format shot even better than the lightweight Colts, and took the T3 to New York during the dark couple of years between when that state’s oxymoronically named SAFE Act limited handgunners to 7-round capacity, and when the Second Circuit Court of Appeals shot that down just recently. Thus, I could certainly understand the rationale of the all-steel Les Baer Stinger 1911 with 4.25” barrel and short butt that On Target recently sent me to test.

When Colt came out with their CCO pistol in the 1990s, the 4.25” Commander barrel/slide assembly atop the short Officers ACP frame, Ray Ordorica wrote that he considered it the ideal 1911 .45 auto for concealed carry. I’ve never found a good argument against that, and soon found myself with a pair of the aluminum frame CCOs in my own gun safe. Later, I found that the Nighthawk Custom’s similar T3 in its original steel frame format shot even better than the lightweight Colts, and took the T3 to New York during the dark couple of years between when that state’s oxymoronically named SAFE Act limited handgunners to 7-round capacity, and when the Second Circuit Court of Appeals shot that down just recently. Thus, I could certainly understand the rationale of the all-steel Les Baer Stinger 1911 with 4.25” barrel and short butt that On Target recently sent me to test.

The Stinger has been out for a while; what’s new for it is its Monolith configuration with a heavy frame dust cover and a slide design that says, “If you called the original 1911 ‘old slab-sides,’ you ain’t seen nothing yet.” Les Baer himself told me the reason for his long-established Monolith design being adapted to this shorter gun was to bring weight up to 36 to 37 ounces to reduce muzzle jump. A conventional John Browning style recoil spring guide and plug are used, and there are no grasping grooves at the front of the slide: I’ll side with Les on both of those decisions. Low-profile Rolo adjustable sights include Tritium inserts from Trijicon, front and rear. Thumb safety is ambidextrous, with the lever on the right side being lower profile than the one on the left. Our test sample was hard chromed.

On the Lyman digital trigger pull scale from Brownell’s, pull weight averaged five pounds, 7.3 ounces. This is a good “street trigger pull” range that won’t sustain a “negligent hair trigger leading to indefensible unintended discharge” accusation, but still gives the shooter good control in rapid fire and, as we shall see shortly, in precise shooting.

You don’t want to carry a loaded pistol that’s not “drop-safe.” Les Baer told me that this pistol is drop-safe to twelve feet, thanks to an extra-heavy duty firing pin spring. I appreciate him paying attention to this important feature. Anyone who says “real professionals never drop their guns” hasn’t been in plainclothes holding a gun on a malefactor when uniformed cops who don’t know who’s who roll up, and more or less order the guy with the gun to drop the pistol or die.

I put the Stinger Monolith through my usual test for precision shooting capability: Matrix rest on a concrete bench at 25 yards, hand-held. Each group was measured once for all five shots (center to center of the farthest-flung bullet holes, to the nearest 0.05”) and then again for the best three. The decades have shown me that this second measurement, if an experienced shooter is behind the gun and has not “called any flyers,” will generally equal what the same gun and ammo will do from a machine rest with all five shots. It’s much easier for the average reader to compare on his own without purchasing a machine rest.

Ammo will be listed in alphabetical order. Atlanta Arms 230-grain TMJ (total metal jacket) round nose .45 ACP is low-priced, but accurate enough that it has won me a gun or two in competition over the years. From the Stinger, it put five shots 1.70” apart, with the best three in 1.15”. This compares favorably with the average 2-inch, 5-shot groups I’ve achieved in the past with my Colt CCOs.

Federal’s Classic line “45C,” a conventional cup-and-core 185-grain jacketed hollow point, has mild recoil and is famous for accuracy. In this case, the group measured 2.30”, but factoring out unnoticed human error with the “best three,” we had a much more impressive 0.45” group. That is, a single .45 bullet would have touched all three of those bullet holes if it had hit their group dead center.

Remington’s standard “Express” line 185-grain jacketed hollow point has been dropping bad guys for 40 years, and was the first .45 JHP to pass the rigid FBI Protocols and be issued to Bureau agents authorized to carry .45s in the late 1980s. When I had launched five of them out of the Stinger and lifted my head to look, my rheumy old eyes saw a black blob above and to the left of point of aim. Walking down to the target, I felt those eyes widen.

The five shots had gone into 0.85 of one inch. Four of them were in a half inch, and the best three measured a quarter of an inch, center to center. Look at the pictures and see for yourself.

Yes, I was impressed by the Les Baer Stinger Monolith!

Bad news: the gun shot high left out of the box. Good news: the adjustable sights made an easy fix out of that. Sharply checkered walnut stocks mated with a checkered front-strap (30 lines per inch) to give a very solid grip, even when shooting with the non-dominant hand.

My one real beef with this gun’s layout was that when I was firing right-handed, the knuckle of my index finger kept bumping the right-side ambi safety lever up just enough to lock the gun. This ceased when I used the popular “thumb holding the safety down” grasp. It may just be that I’m an old guy whose knuckles and fingers are a bit twisted and enlarged by arthritis. Dry fire the pistol in the gun shop; if this is going to be a problem for you, it will become evident before you lay your money down to buy it.

The couple of ounces of extra weight up front are well applied. Recoil was very controllable in the test pistol, with the sights coming quickly back on target. The Stinger Monolith was, quite simply, comfortable and efficient to shoot. If you’re going to holster-carry an all-steel Commander-size gun, a couple more ounces aren’t going to create discomfort.

What does prove to be a challenge is finding suitable holsters: the Monolith configuration won’t fit most 1911 scabbards. “Rusty Sherrick is making holsters for the Monolith, and so are three or four other holster makers,” Les advises. This is a negative if you are a 1911 person hoping to use this pistol in the holsters you already have; if you’re new to the 1911 platform, you’ll have to acquire leather (or Kydex) for it anyway, so no biggie there.

My training schedule and On Target’s deadline did not mesh well enough for me to shoot a match or teach a class with the test Stinger Monolith. For a quick “shootability test,” I set up a Colt Police Silhouette target and ran the first half of the old PPC course, using a less-than-optimal generic belt slide holster. At seven yards, the “six, reload, six” in 20 seconds stage resulted in a dozen Atlanta Arms ball rounds grouping tightly in the center of the roughly heart-size “5X center ring.” From the 25 yard line, six shots each from the barricade fired kneeling, left hand controlling the gun while standing, and right hand standing all went swiftly and comfortably into the K5 zone. Twenty-two of the 30 total shots had hit the tie-breaking X-ring, for a 100% score of 150 out of 150 possible qualification points.

I noticed that unlike most Les Baer pistols, this one didn’t need two men and a boy to pull the slide back when it came out of the box. Turns out that Les and his team had already put some four hundred rounds through it before they sent it to On Target. “We hard-fit the barrels,” Les explained to me. “They’re all tight at first, and it takes up to 500 rounds to loosen them up.” That’s the price you pay for Les Baer’s famous accuracy . . . and, of course, a good excuse to shoot more.

By the time the test was done, we were sneaking up on a thousand rounds through this pistol, counting the 400 trouble-free shots it had fired before it was sent to us. It came with three magazines, and we also ran it with Wilson-Rogers mags. We noted two malfunctions, both steep 12 o’clock misfeeds with the same provided mag and none with the Wilsons. That one mag was taken out of the rotation, and no further malfunctions occurred. At a suggested retail price of $2915, the Les Baer Stinger Monolith sits solidly among the other top-ranked ”boutique” 1911 brands in terms of workmanship, accuracy and value delivered. Our test pistol came with three 7-round magazines. Add $295 if you want the hard chrome finish seen on ours.

The tightly managed, expertly run production line at Les Baer Custom can produce only 275 to 300 guns a month. The demand for them is such that waiting time is currently ten to fourteen months. This speaks well of the value, quality, and desirability of pistols like the Les Baer Custom Stinger Monolith .45 ACP. To order yours, contact Les Baer Custom, Dept. OT; Tel.: (563) 289-2126; Web: www.lesbaer.com