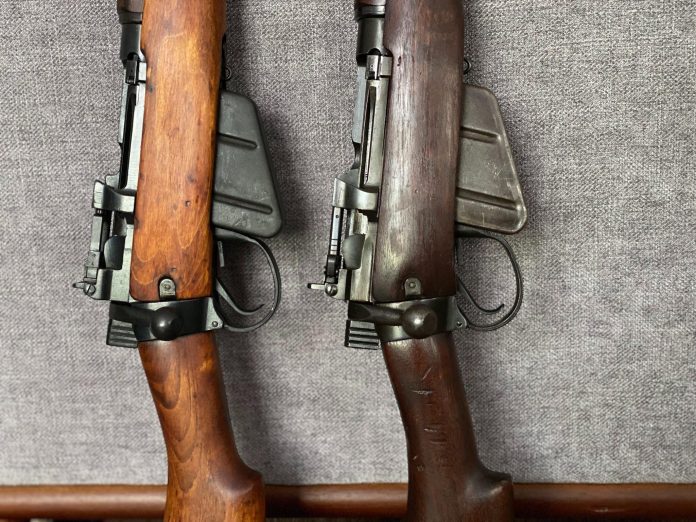 Featured Image: A pair of No.4 Mk.1 Lee-Enfields. Notice the butt socket directly underneath the bolt knobs.

The Lee-Enfield rifle, Britain’s last true gun of Empire, was designed in the late 19th century by James Paris Lee. Like many of the emerging bolt-action battle rifles of the period, early variants made their debut during the conflicts of the early part of the 20th century.

By the First World War, the current iteration of the rifle was known as the No.1 SMLE (Short Magazine Lee Enfield), and this particular model made Lee-Enfields a known entity. Lee-Enfield rifles were primarily chambered for the .30-caliber .303 British rifle cartridge dating back to the late 1880s. The .303 British cartridge is old enough to have been loaded with black powder for use with the forerunner of the Lee-Enfield rifle, the Lee-Metford rifle.

Like many cartridges of that time period, it is rimmed and its casing had generous tapering. The SMLE and its Second World War younger brother, the No.4 rifle, were both the UK and Commonwealth primary infantry rifles until the 7.62mm NATO L1A1 FALs eventually replaced them along with the .303 British cartridge.

Lee-Enfields always had certain quirks about them: mechanically, visually, and otherwise. For example, the SMLE is arguably one of the most recognizable infantry battle rifles, as it has this reinforced front sight protector and muzzle cap which makes it look like a hog snout. The silhouette of a British “Tommy” with his Brodie and SMLE in hand is probably one of the most iconic aspects of the 20th century British Military.

For starters, this was probably the first bolt action rifle to use a two position thumb safety (made popular by the Remington 700 design), albeit the safety on Lee-Enfields is on the “wrong side.”

Whereas other bolt-action rifles of the period typically had a five cartridge capacity, the Lee-Enfield held ten. Whereas most of those rifles also had internal box magazines, Lee-Enfields had detachable box magazines instead. (It should be noted that contemporary military doctrine expected soldiers to charge their rifles with stripper clips and not swap magazines. However it can be argued that a bolt-action rifle with a detachable magazine was quite forward thinking for its time). Whereas those other rifles had actions that cocked-on-opening, the Lee-Enfield had a cock-on-close action that could be cycled more quickly.

Since 1909 British soldiers took part in a shooting drill known as the “Mad Minute” where a minimum of fifteen rounds had to hit a 300 yard target. Due to the angle and placement of the action, expert marksmen were able to shoot nearly twice the amount of rounds by using the palm of their hand and along with the smoothness of its cock-on-closing action. Unlike virtually any other period bolt-action rifle, Lee-Enfields had a threaded bolt head that screwed right into the bolt body. Screw-on bolt heads were possible in part because the rifle was designed to lock into the receiver with the main part of the bolt body. This freed up the bolt head from bearing any extra pressure. It also helps that the .303 British cartridge was not known to be a high pressure rifle round either.

Different and interchangeable sized bolt heads meant that armorers could conveniently mix and match suitable parts with regard to proper headspacing: a century old approach to modularity in bolts.

Not surprisingly, Lee-Enfield receivers themselves are different than the receivers of their contemporaries. Besides the main part of the receiver that cradles the action, Lee-Enfield receivers have a circular disk shaped protrusion at the lower rear extremity of the receiver and right above the trigger and trigger guard. This “disk” separates the rear buttstock from the forestock in front of the action; model and serial number information is typically stamped on this part of the rifle.

Not surprisingly, this protrusion is called a butt-socket as Lee-Enfield buttstocks screw directly into them. The manner in which a Lee-Enfield stock attaches to the butt-socket is not dissimilar to the way most shotgun stocks screw into the back of their receivers. While this isn’t remarkable today, a century ago an armorer could fit four different standard stocks that were all sized differently to any Lee-Enfield rifle in order to adjust the length of pull for a given soldier’s rifle. This avoided the issue of the entire British fighting force having to make do with a one-size-fits all rifle stock.

Changing an individual stock is a far cry from the adjustability afforded by an AR-15 receiver extension with a SOPMOD stock. However, it still demonstrates a level of progressive and modular firearms design that was definitely not yet the norm the way it is nowadays. To keep things in context, the Lee-Enfield family of rifles as a whole is an example of modular innovation from a time when the internal combustion engine and aircraft were in their infancy, along with things such as indoor electricity and lighting.