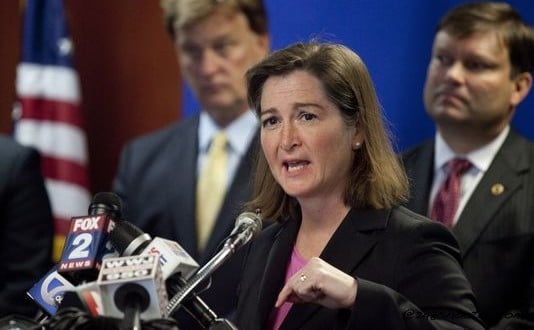 Lawmakers are put into office to do one job, and that is keep passing laws. Unfortunately, a limited view of society keeps these lawmakers from understanding that criminals don’t care how many laws they break. By their nature as criminals, they ignore laws in the first place. So how do our representatives respond to an increase in crime and illegal activity? Make more laws!

Such is the case in the City of Detroit. The US Attorney’s office in co-operation wit the Wayne County’s prosecutor’s office to step up Federal prosecutions for violent felons caught with guns.

It is refreshing to see finally violent felons increased enforcement. For too long legal gun owners and responsible non-violent citizens have been the target of the anti-gun crowd. It is about time the focus of anti-gun violence revolve around those who illegally possess and use weapons to the detriment of society.

It is also good to see that Mayor Mike Duggan is stepping up their ability to enforce legislation already on the books by putting 200-300 new police officers on the streets this coming year. It is about time the casino and re-development money from the city be put into supporting local police officers.

What alarms me, however, is the typical political grandstanding that comes with moves  like this. Take for instance the comments from Mayor Duggan “We may not have the resources to get everybody right now, but we do have the resources to go after everybody who chooses to use a gun”.  He continued with “Every month that goes by, we’re going to make it more and more difficult to get away with a crime using a gun,”.

As long as his focus remains on violent offenders using guns for crime instead of responsible citizens focused on self-defense all will remain well. We have a fantastic Chief of Police now who respects citizen rights to own weapons, so that is a positive.

The last part of this “Plan” to curtail gun-based crime in the city, however, looks to be the typical pork belly spending so typical of the city. There is a plan now to increase public awareness of the terms and penalty’s associated with gun crime.  Why have a campaign to let criminals know crime is illegal and will result in jail you may ask? Well here is the answer from the mouth of the U.S. Attorney Barbara McQuade “When we explain to defendants the kinds of penalties they’re facing, they’re shocked,” McQuade said. “It’s up to us to make sure before they commit the crime, they’re aware of those very serious penalties.”

I have a 10-year-old son who says similar things to me when I ground him or take away his electronics. “But dad I didn’t know I would get in that much trouble for my actions” he would say. The answer to him is the same I would pose to the criminals. You knew you were doing something wrong, and you did it anyway. How does knowing the punishment change that?

Soap Box Time
If we are going to change things to make Detroit, America, and the World a better place the answer is simple. We need fewer laws and more common sense. We need to not treat violent offenders like they are the victim and blameless but instead hand down harsh punishments that reflect the crimes regardless of gun, knife, pipe or any other weapon used.

Right from wrong needs to be the focus in schools and legislation not crime vs. punishment. Criminals don’t debate crime vs. punishment they are criminals and disregard the law completely. To think otherwise is naive and dangerous. This education campaign is nothing but lost money that could be going toward non-violent offender rehabilitation or drug treatment programs that may prevent drug users from becoming violent criminals.