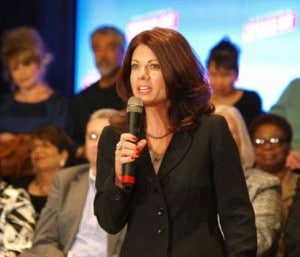 With California’s unique new law in place that allows for gun confiscations from those thought at risk, a state lawmaker wants to make sure it’s not abused.

The law in question, which passed the state legislature as AB 1014 last year, provides a framework for the temporary seizure of guns from an individual at the request of their family or friends.

It was implemented following an attack in Isla Vista, California, that gun control advocates advised could have been prevented under the new procedure, which allows firearms to be confiscated for up to a year if an order is granted. However, Assemblymember Melissa Melendez, R-Lake Elsinore, is concerned that it is too easy to abuse.

“Law abiding gun owners should never have to fear their rights can be stripped away because an angry ex or neighbor wants to get even,” noted Melendez on the legislation in a post on social media.

Melendez’s solution is to temper the use of the new law by making it a felony to file false reports seeking gun violence restraining orders. Her bill, AB 225, was introduced Feb. 3. It would make filing a request for an order using knowingly false information felony perjury under state law, which would mandate a punishment of up to four years in prison.

California’s gun violence restraining order law was criticized during its legislative process by groups ranging from the National Rifle Association to the Liberal Gun Owners Association who criticized the low evidentiary standards and potential to dissuade troubled individuals from seeking medical treatment.

“The AB 1014 Gun Violence Restraining Order laws are nothing but a minefield for innocent Californians and actually incentivize abuse by anti-gun radicals,” Brandon Combs, president of the Firearms Policy Coalition told Guns.com via email. The FPC strongly supports AB 225, which they see as a first step to correcting “numerous terminal deficiencies” in the current law.

“Assembly member Melendez deserves credit for introducing language to protect law-abiding gun owners from harassment and the loss of their fundamental Constitutional rights,” Combs said. “We are cautiously optimistic that other members will follow her lead and work to correct AB 1014’s other unconstitutional and dangerous flaws.”

Since its adoption in California last year, similar measures were proposed in Virginia, New York, Washington State and in the U.S. House without gaining traction. However, U.S. Rep. Lois Capps, D-California, has resubmitted a federal bill with the support of Isla Vista victim survivors.

Melendez’s bill is set to be heard in committee March 6.