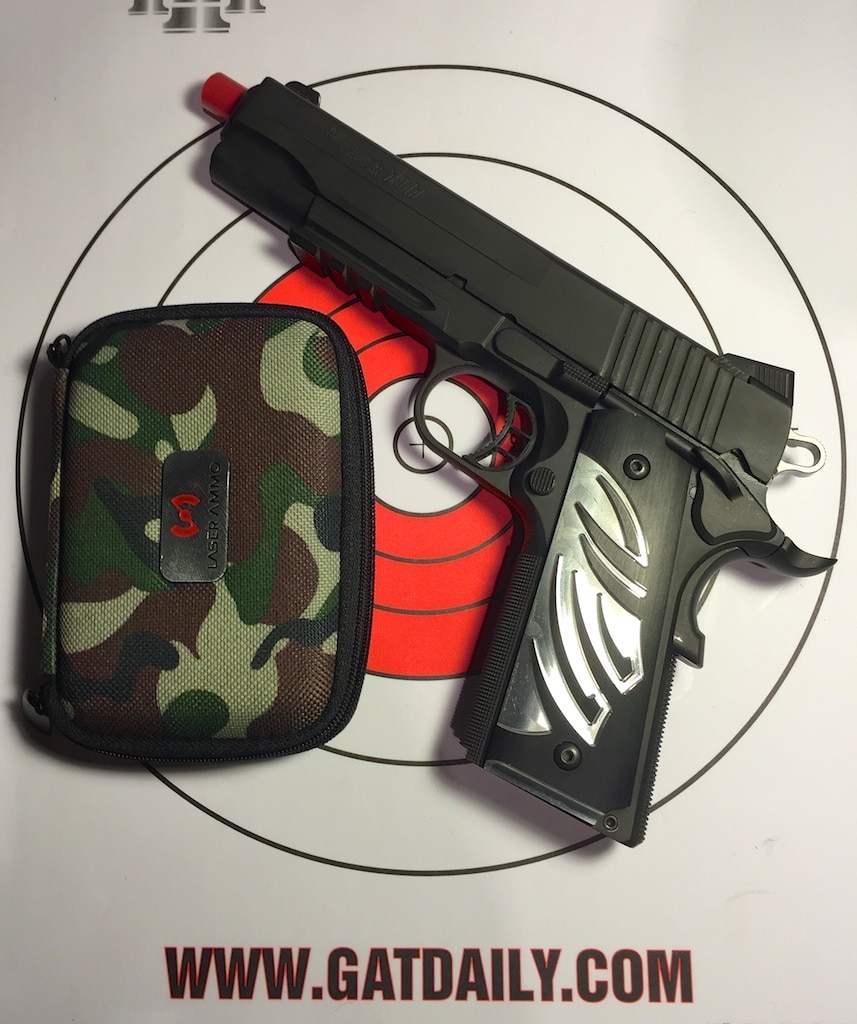 So we received Laser Ammo in the mail the other day. When I first checked this company out I thought, this is a novel idea and might have some benefits. That might be the understatement of this year. The team I spoke with at Laser Ammo is knowledgeable and really interested in helping those in the gun community. These are the types of companies I love to work with, so it only made sense to give them a whirl.

Well, after the first day I am hooked on the product. After the third day, I wondered how I had gone so long without this. After two weeks, I think they named the product wrong.

It should be “super mega awesome training laser designed to save you thousands and improve your skills with drawing, shooting and target acquisition at home in your spare time that is also a bore sight”. Since that is kind of long, it could have been: SMATLDTSYTAIYSWDSATAAHIYSTTIAABS since we all love abbreviations in the tactical market.

Well, my guess is none of those would fit on the small self-contained kit they ship you. So they had to just call it SureStrike. I think they missed out here but what do I know.

Ok, enough about the name lets talk about what you get and why I think this might be one of the coolest products I have had a chance to review.

What You Get:
We picked up the SureStrike ultimate LE Edition for $199 since it contains the majority of calibers we regularly shoot. The kit comes with:
• 223 SureStrike laser cartridge and pipe
• 9mm SureStrike Dual Function cap — 5,000 additional shots!
• 40S&W caliber adapter
• 45ACP caliber adapter
• Safety system
• Extension pipe
• 6 reflective targets
• Carrying case
The main part of the kit is a slim 9mm stainless steel bullet shaped laser. The LE kit has two base plates for the device; the main one is for pistol calibers, and the second is for 223/556. 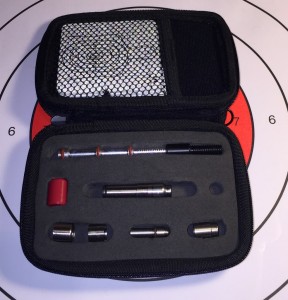 There are several adapters to widen the base laser so it will fit 40 and 45 calibers. There is also a “safety rod” that indicates that the gun is safe and prevents the gun from accidentally loading a live round.

All of this comes packaged in a zipped up Multicam carrying case that has cutouts for each part. This makes taking the laser ammo with you on the road very easy. The package is small enough to fit in a pocket on a standard pair of trousers.

USE:
The system is easy to use in any handgun. Unload your weapon and check for clear. Determine your caliber and load the laser device into the gun through the breech. Bring forward your slide, screw in the safety rod by running it down the barrel and your ready to fire.

For the 223 versions, there are a few small changes. You will need to replace the action cap of the laser device and then screw in the extension pipe. Slide it into the breech and bring your bolt forward. You will not use the safety pipe with this version.

This was the largest con when testing and is most noticeable in striker fired guns. I see no way that this can be avoided as the laser ammo needs to be hit by the striker to work, and there is no way to mechanically reset the striker without manually racking the slide.

Even with this one downside laser ammo is easy to use and offers some huge advantages.

What’s good
I have two kids a wife, a company a blog and charity work that take up a huge portion of my time. While I do get to shoot more than many I still struggle with getting to the range. Since running the blog, I find the range time I do get is often shooting content or testing specific gear. This leaves me less time to work on my fundamentals.

The laser ammo shines here. You can run all sorts of drills using the laser ammo, and you can do it anywhere (except around liberals). If you’re looking to work on trigger discipline, this tool is a god send. I have been able to greatly refine my accuracy by practicing trigger control thousands of times using this tool. Yes, thousands of times.

Along with the laser ammo we picked up the laser PET. This simple device runs in 3 modes with changeable targets. You can set it up as far away as your comfortable, and it will reactively count your hits. 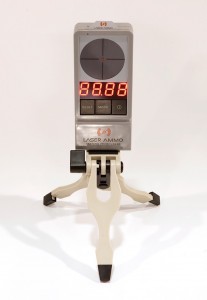 Laying on the couch with the target above the cable box I am able to get in a good 300-400 shots during an hour long show. Doing this just once a week will put you far ahead of most friends. Or you can get excessive like me and do it four nights a week.

The one con to this is my racking the slide through my wife’s favorite shows has lead to me sleeping with one eye open. So tread cautiously.

Once I refined my trigger control and had tested the laser ammo as a basic training aid it was time to move to more complex drills. Setting the LaserPET up in the room, I would leave the room holster the gun. The goal was to walk into the room acquire the target draw and shoot. With the reactive target, you can tell if you’re on target quickly and see how far off you are.

Later I had the kids move the target around and tried the drill again.

For fun, I was able to also start working on distance shooting. Putting the target 50-100 yards away ( I have access to a very large banquet hall) I would draw and shoot to see how accurate I can be.

Laser ammo allowed me to train where I would otherwise not have had the time to do it, and it saved me hundreds compared to the cost of live fire.

What’s not good?
Ok, so there is no free lunch and everything comes with a trade-off. There are only two issues I have found with the laser ammo and frankly I don’t think either is a problem.

The first is laser ammo has no recoil. Which means it is much easier to stay on target and register a hit using a laser beam then a projectile. If you do nothing but practice with the laser ammo your going to possibly develop bad habits in regards to follow-up shots.

Laser ammo is not a perfect replacement for going to the range, and it should not be treated as such. It’s more like a tutor than a teacher. You still need range time you still need live fire time and as long as you account for that your going to get way more positive out of the ammo then you will ever see in negative.

The second issue is the one I already mentioned. You need to manually reset the slide or hammer after each shot. This makes training for double taps difficult. It also can be a pain in the ass. Especially if you’re using an IGFS modified Glock with serrations. When testing laser ammo with my hammer fired guns, it was much easier on my hands and went faster.

While this is an inconvenience, it is not an issue, and it can be worked around.

Who should use this?
This is an easy question to answer, everyone. No, seriously EVERYONE. Who among us would not benefit from more trigger time? New shooters can get used to the motions of racking and trigger control combined with sight acquisition at a low-cost point and without the negativity that can come from range time.
My wife is a prime target for this. She is not a fan of people being around when she trains and more, so she is still a bit nervous when pulling the trigger. Getting her to shoot over and over again without recoil starts to tear down the mental block she put up. It makes it easier for me to get her on the range now that she is more comfortable with a gun she uses, and in how she feels pulling the trigger.

For people who train on a regular basis and go through thousands of rounds a year this is a great way to practice fundamentals at home and allows you to spend more time on advanced techniques at the range. Making your range time more productive and less expensive.

The advantages with young shooters are just too numerous to count. Having a way you can teach muzzle control, trigger control, stance, gun safety and target acquisition in a safe manner is paramount to getting kids into shooting. With 22 ammo hard to come by, Laser Ammo offers an affordable way to get young shooters trigger time without breaking the wallet.

I want to hear from you though. Do you use a training aid like Laser Ammo? Why do you use it or why did you stop using it? 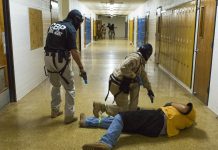 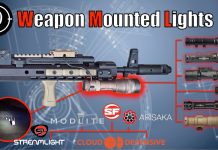 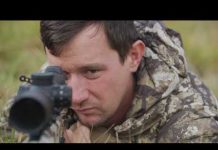