I’ve been training with a few different Laser training systems this last month. They’ve all had their strengths and weaknesses and I’ve gotten a real solid month of training. The Laser Ammo i-MTTS system is the only multi-target system I’ve utilized. What’s interesting is the fact the targets can ‘talk’ to each other and interact with each other. The i-MTTS system comes in target sets of 1, 3 , and 5. The set I reviewed is the 3 pack. I did a first look here.

The i-MTTS system is basically a base and a target. The target can be interchanged with four different targets. There is two simple bullseye targets one large and one small, there is a B 27 silhouette target and mini IPSC target. You get three per target so a total of 12 with the three pack and 15 for the 5 pack. The i-MTTS has 5 shooting modes for various training capabilities.

The targets use both visual and audible signals to give hit indications. The visual is a series of lights and beeps are indicative of different reactions the targets have when shot. You can change the feedback modes by the push of a button. You can turn it to light or buzzer only, as well as both at once.

The standalone mode means you simply shoot the targets and you’ll get an indication they’ve been hit. This is a good general training mode and is best for giving new shooters simple feedback. 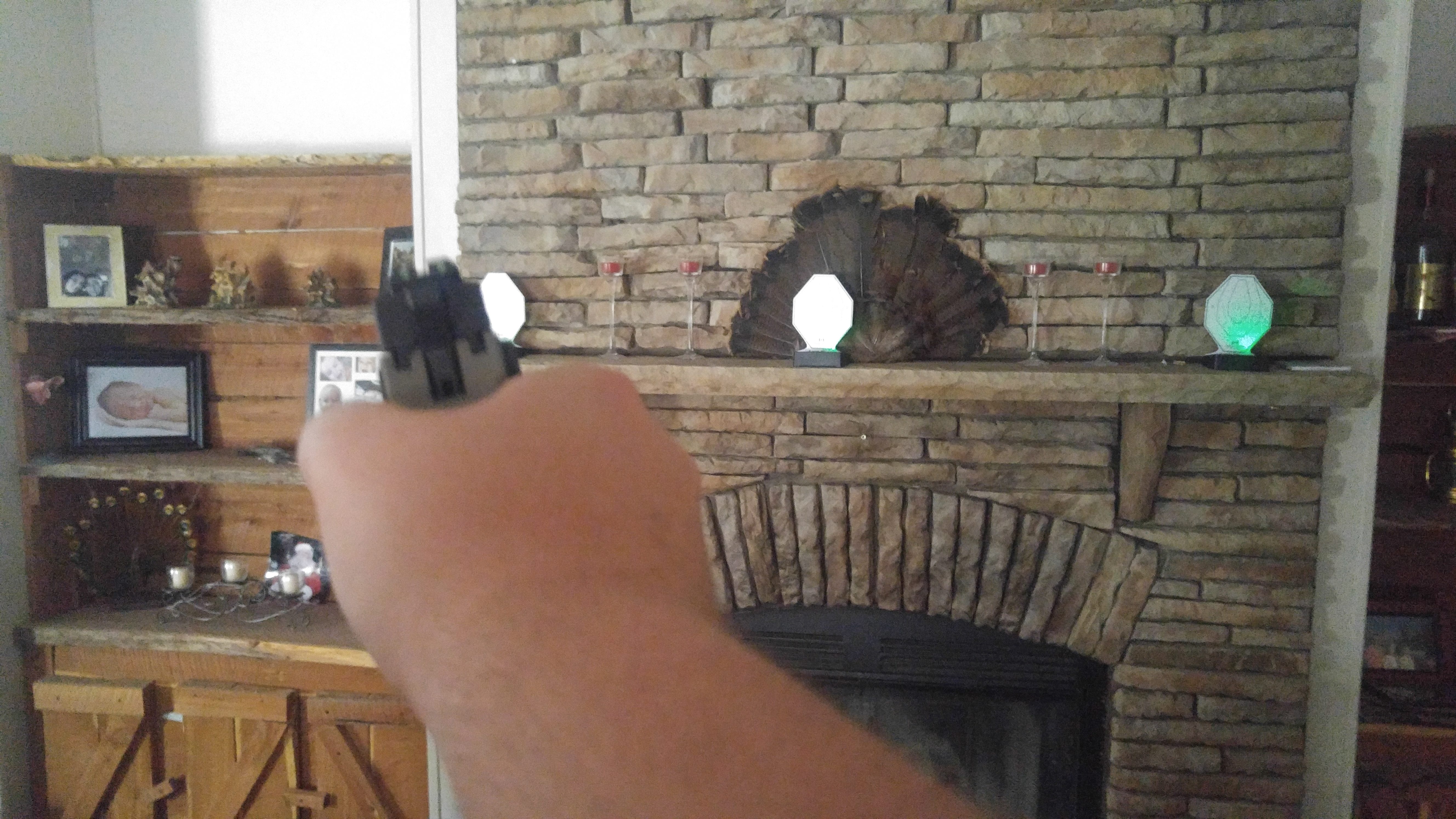 The steel plate mode is where the targets start communicating. The targets will all need to be shot before they will reset. The targets will be illuminated by a yellow late and go dim when hit. It’s a very simple mode, but with a little creativity can be used in a variety of different training.

The chase the ball mode is pretty interesting. It grows in difficulty as you place the targets further apart. It seems like a fun game, but what it does is train you to get your front sight on target quick fast and in a hurry. What I’ve personally seen improved is my ability to get back on target when transitioning from target to target. My eyes learned to keep on the front sight, and it improved my point shooting ability.

The Shoot or No Shoot mode has two setting, standard and lightning fast. This is a rapid mode where you shoot the green targets and try not to shoot the red targets. Shooting a red target results in a failure of the training. This keeps your mind moving and you’ll fail if you don’t keep your mind sharp.

Using all of these training systems I’ve learned that the more creative you are the better training you’ll get with these systems. For example placing the targets farther apart from each other makes the shoot or no shoot modes and chase the ball modes a lot more difficult. This helps you train for rapid and effective target transitions.

One of my favorite challenges was placing targets in a manner where I couldn’t look at all of them at one time. This causes me to improve my situational awareness. We’ve all seen the tactical left to right scan, be it in actual training, or with YouTube tactical shooters. I know from experience most of the time people aren’t really observing anything, they are just looking left to right. I did this, and most Marines I knew did this.

Using the Shoot or No shoot mode on the i-MTTS with the targets placed out of my eyesight I could scan and actually be forced to look. As a shooter, I’m also training to look at the targets without instinctively pointing a gun at them. With the targets in steel plate mode, I was also able to train in target transitions from different and more dynamic angles. This includes rotating my entire my body and working on footwork and balance.

The pinnacle of my creativity was combining my i-MTTS, with some picture hanging strips and a silhouette target. I also combined a Laser Pet target from Laser Ammo in on this training. I hung two large silhouette targets on my walls, and then attached to an i-MTTS target to the chest of both targets, and one to the head of the target. On the last target, I attached the Laser Pet target. I set the i-MTTS targets to steel plate mode and the Laser Pet target to mode 2, the quick draw mode.

This effectively set up a failure to stop drill on two targets. Since Tom Cruise rocked it in Collateral it’s also known as the “is that my Briefcase Homie?” drill.

This is not only fun but allows a shooter to practice drawing, sight acquisition, and shooting rapidly on a small target. Hitting a silhouette is one thing, hitting a small target on a silhouette is where the challenge lies. Placing the i-MTTS on the vital area of the silhouette allows me to work shot placement on a human sized target. The timer is just a nice touch and not necessary, you could use another i-MTTS target.

I have two complaints. The first more or less regards the Laser Ammo cartridge. Once it’s battery starts to die the system doesn’t recognize the laser when it strikes the top of the larger targets. A full powered laser isn’t an issue, just the weaker, dimmer laser as the batteries die.

The second complaint is the bottom of the targets is where you insert your batteries. There isn’t a bottom piece to keep the batteries in place. If it’s set down slightly less than gentle the batteries come loose and you have to squeeze the batteries back in.

That’s my only real complaints. I think Laser Ammo has an interesting and unique idea for laser training. A simple interactive target system and a laser cartridge can take you a long way. I’ve taught a few concealed carry classes and used this system with students. It’s especially handy for new shooters. We can work on trigger control, sight picture, and follow through with a system that gives direct feedback to the user. It’s also a recoil and explosion-free environment. I can talk and teach easily and observe a student from a multitude of angles not possible on the range. The i-MTTS is a great system for the everyday shooter who’s looking to up their dry fire game.