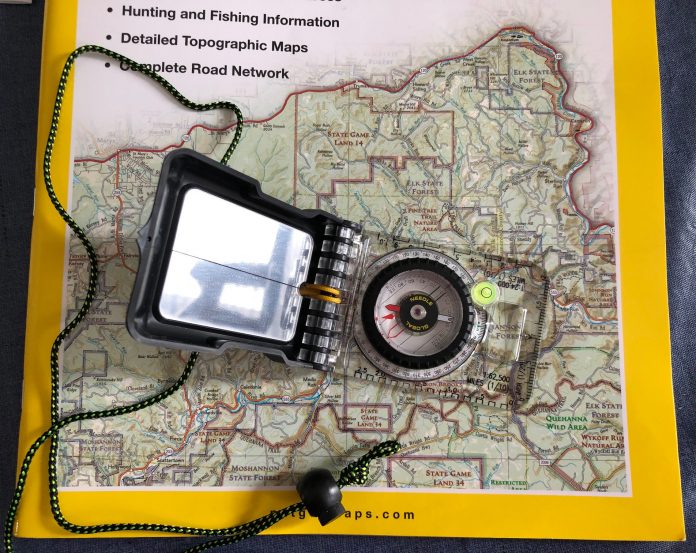 Well, it’s new year and it’s time for a new goal. Last year I put tons of effort into deer hunting. But I kinda burned myself out on that by December and now I need something new to learn while I wait for the deer fever to come back this summer.

For my 2022 outdoor goal I decided that I want to learn some land navigation/orienteering skills.

Why do I need those skills with technology like GPS and OnX Hunt available? Because batteries die, and there are creek valleys where signal isn’t available. I’m not a back country gal by any stretch of the imagination, but there are areas of family properties where there is no cell signal. Plus there are scads of public lands to explore and I have thus far stuck only to places where I already knew exactly where I was going. I want to change that.

Add the above to my basic interest in historical ways of doing things and thus – I want to learn to use a map and compass.

Unlike many of you, I never joined the military, I never had a land nav course, and I learned only minimal outdoor skills in my Girl Scout days. I got some basic topo map reading in a geology class in college, but that’s about it for my map skills. Lewis and Clark I ain’t.

I have not been blessed with much of an innate sense of direction either. I know that there are people who seem to instinctively know which direction to travel (the chatty cashier at Bass Pro is apparently one of them), but I do not list myself among their number. Map skills would help make up for this neurologic deficit.

Not wishing to end up like Daniel Boone, who famously quipped, “I can’t say as ever I was lost, but I was bewildered once for three days”, I began an internet search for map and compass skills classes.

The very first class I came across – at True North Wilderness Survival School – looked like just the ticket, so I signed up. The class isn’t until April, so I’ve got two months to get myself back into walking shape. (Lying around on the couch and eating for the holidays has not been good for my cardiovascular system – it’s time to get off my plus-size butt)

Additionally, this same outfit offers wilderness medicine courses, so that may be something else I investigate in the future. But first things first.

Continuing my search, I came across a self-paced online map and compass course which would maybe keep me occupied while I’m waiting. I submitted my email for more information and we’ll see what happens with that.

I also found in my searching that several state parks have established orienteering courses upon which to practice these skills once obtained. That ought to be a fairly low risk way to test my new knowledge before I venture too far from home.

In the meantime I perused my local Bass Pro Shop and found what I think might be a suitable compass. I know Brunton is a good company because all the geologists I used to hang out with had Brunton high-end transit compasses. Not wanting to invest 400 bucks however, I went with this model. I guess I’ll find out if this was a good choice come class time.

I know, I know, I shouldn’t buy equipment until I know what I need, but I’m one of those types that once I get a bee in my bonnet about something, I have to act immediately before I lose my initiative. It’s a character flaw that I have learned to accept and just go with.

I’ve already discovered that a major piece of survival gear I’m going to need for all of this is a spare pair of “cheater glasses” to pack with my map and compass in the same zipper bag. I had LASIK 20 years ago, but presbyopia has crept up on me and the font on that stuff is awfully TINY. It won’t do me a damn bit of good to have map and compass skills if I can’t actually read the print on the durn things. And you twenty-somethings can just hush up. Your time will come.

Now that I’ve established what “direction” I’m heading this year (Ha, get it?), now I need to follow through with that goal. Wish me luck. What goals have YOU set for yourself this year?