Once upon a time when it came to AR 15 magazines you were limited to gray aluminum, or black aluminum and you were happy just to have them! This was back when we had to go uphill, both ways to the local gun store. Times change and so did AR 15 magazines. Magpul may have not invented polymer magazines, but they produced the first affordable, reliable, and durable polymer magazines. After the Pmag hit shelves the market changed for the better. These days there are literally dozens of polymer magazine manufacturers. One that caught my eye is Lancer. Lancer produces a hybrid magazine that is almost entirely polymer, but has steel feed lips. So I’ve decide to do a bit of testing with the Lancer L5 and see how well it stacks up.

I’ve put magazines through hell before, and usually it’s several magazines at once. In this case I was going to focus on one magazine. The Lancer L5 I used was brand new, bought explicitly for this test. Before we begin the Lancer L5 Torture test let’s talk about the magazine and what sets it apart.

I originally purchased a Lancer L5 because it appeared unique. The reason being is I really like polymer as a magazine body. It doesn’t dent, or bend, and tends to be a lot quieter in magazine pouches. I also like the drop free nature of aluminum. This makes swapping mags easier in a pinch.

I’ve also had issues on my second deployment with polymer feed lips. I’ve had them break after repeatedly striking a metal deck. The Lancer L5’s steel feed lips should rock and roll even after tons of abuse. Lastly they function perfectly in my SCAR 16S which is always a consideration for me.

Now, I’ve decided to see if they can take the kind of abuse necessary to keep up with how I tend to abuse guns and gear.

The tests have all been derived from my experience in the Marines and the environments and how magazines are treated in the infantry. The tests are my attempt to replicate the abuse magazines take. The tests are all done with a loaded magazine of 30 rounds and neither magazine or ammo will be cleaned until the test is over.

First and foremost I wanted to see how the magazines would handle being dropped from rifle height. I did this test a total of 10 times using two different methods, 5 reps per method. The surface they were dropped on was a set of cinder blocks.

The first method was simply dropping them from the rifle as if I was doing a speed reload. It’s hardly uncommon for a magazine to strike the deck. They usually struck with the bottom of the mag hitting the block. This caused a single round to eject 5 out of 5 times.

The second method was dropping the magazine from my hand upside down. The goal was to make sure the magazine landed on the feed lips. In this situation 1 round was ejected two times.

In a running gunfight you aren’t worried about treating your magazine gently. The use of cinder blocks was to recreate the hard and merciless terrain of an urban environment. The two weakest parts of a magazine is where the bottom plate attaches to the magazine and the feed lips. Close inspection after the test showed only scratches and bumps to the magazine.

The next test was the “pass me a mag” test. In combat you may hit a situation where a brother in arms needs a magazine and you have to throw them one. Throwing magazines presents some risk to the magazine. To replicate the absolutely worst conditions I tossed the magazine at a massive rock that occupies my backyard. I attempted the test ten times. 4 out of 10 times a single round ejected as the magazine struck the rock.

My goal was to replicate the worst possible scenario for tossing someone a magazine. This simple test allowed the magazine to strike the rock at different angles. Unlike the drop test this would test how the magazine would handle strikes on different parts of the magazine body, with the additional force of a throw involved. As silly as throwing a magazine at a rock seems, the rock does have varied angles. This makes the angle the magazine strikes unpredictable, and it never strikes the same way twice. If there is a weak point this test would find it.

Again, there was no noticeable damage to the magazine. 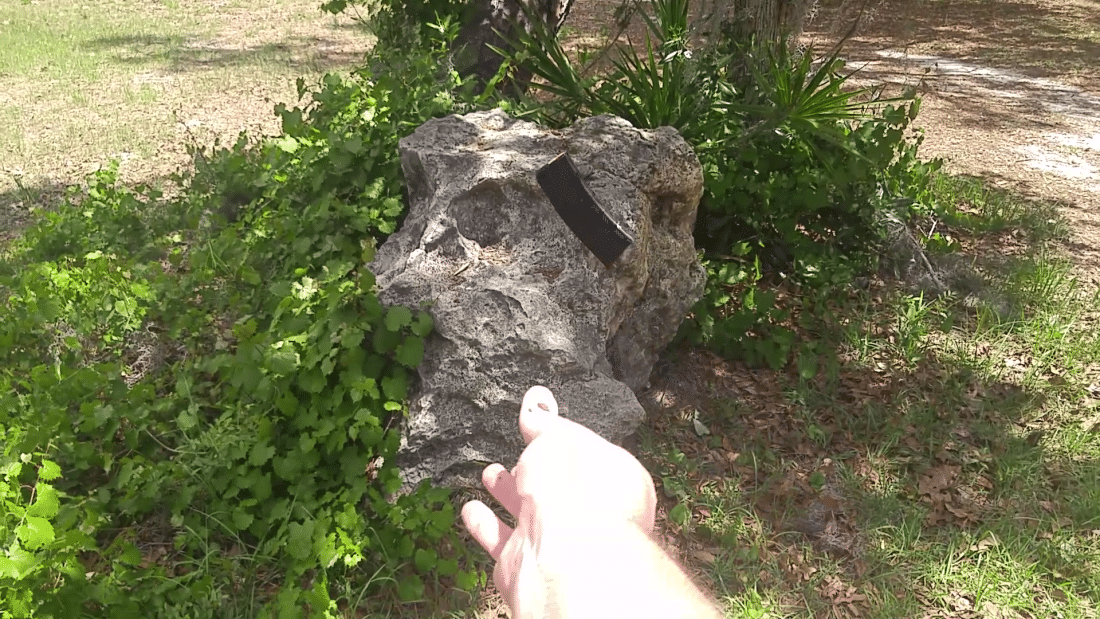 After being banged around

Dirt and water seem to be the best friends of Marines. If we weren’t wet and cold we were hot and choking in dust. Be it Iraq, Afghanistan, Djibouti, or the UAE, dirt is a constant companion. So a primary point of my Lancer L5 Torture was to see how the magazine functioned in dirt and water.

I live in a naturally sandy environment so it replicated some bad parts of the world pretty well. So I buried the mag, completely and totally. Burying a magazine follows a similar trend of this article, testing to the worst possible scenario.

Sand can and often will gum a magazine up. As sand gets caught between the magazine body, the ammunition, and magazine spring it creates friction. This friction when taken to the extreme will prevent the rounds and spring from raising high enough to feed your rifle.

With a name like the Marines you shouldn’t be surprised by how often we got wet. There was the traditional ship to shore beach landings, and trudging through the Helmand river kept us wet in Afghanland. I carried a belt fed through the Helmand, but the majority of my squad trudged through with magazines. I’ve seen them fail and succeed at different levels and in different situations after being hit with water. Notice the Water coming out of the loaded Magazine

So I got it wet, and I got it dirty. I poured a bit of dirt, a bit of sand, and a little water into a large bowl and I ducked the magazine in it. I piled more dirt in on top of the mag and stirred it up. Made sure the water soaked in nice and deep. I wanted to give the poor Lancer L5 hell.

When mixed with water and dirt this concoction is also very likely to create internal friction. The water will also draw airborne contaminants to the magazine. The magazine also needs to be able to drain. A magazine full of water is likely to compromise the ammunition over time. From this test I noticed dirt clung to the ammunition, as pictured below.  The magazine actually drained very well, as you can see in the picture above.

Does it Go Bang?

This was the quintessential moment of my Lancer L5 torture test. Will it function? I loaded it up in one of my AR 15s, still wet from being dropped in water and racked it. 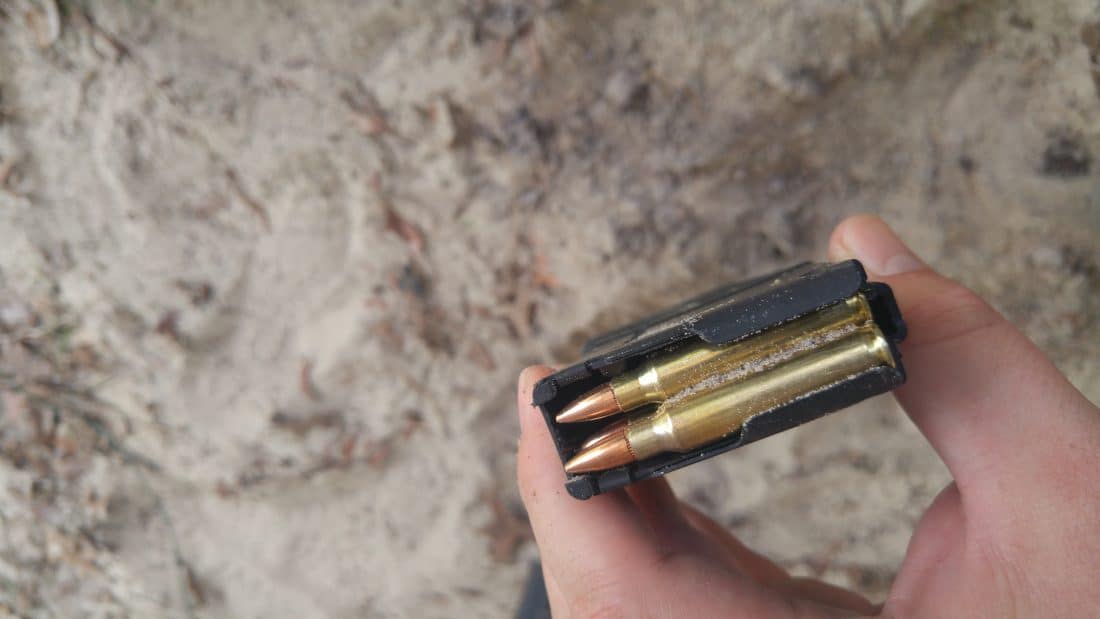 And then it went click. The first round ejected but the second round failed to feed. It didn’t jam the gun, the spring failed to raise the round high enough to feed. Clearly the ammunition was affected by the sand and mud.

I gave the magazine the old tap, rack, and finally bang. I really ‘tapped’ the bottom of the magazine about as hard as I could. The weapon continued to function for the next 26 rounds. Perfectly. The second to last round fired, ejected, and then I had a standard failure to feed. The round dived slightly, and another tap, rack, bang fixed it.

So a total of two malfunctions over thirty rounds. I had confidence in the magazine, but was surprised it functioned oh so well. I expected malfunctions, and thought they’d be more frequent and difficult. Keep in mind the magazine went through these tests all in the same day, one after another, always loaded.

Once disassembled there was no damage to the follower, spring of floorplate. It was filthy and wet inside, but it held together. What do you think? Was my Lancer L5 Torture test up to snuff? Is there any tests you think I should put the mag through? Let us know.