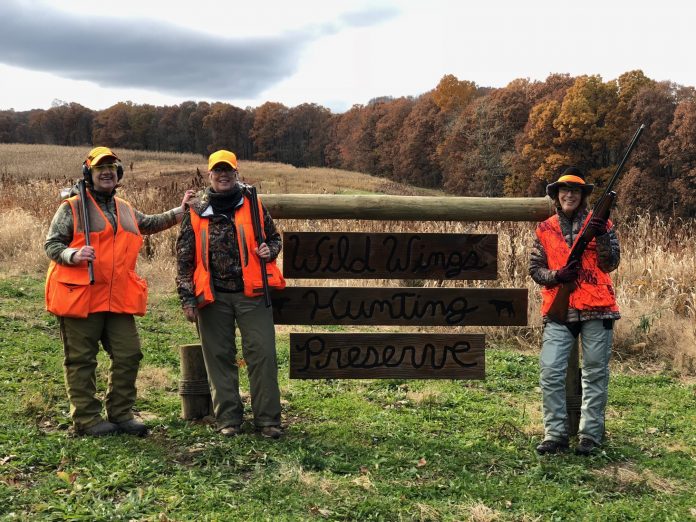 What do you get when you combine seven women, wine, a vacation house, grilled venison, shotguns, pheasants and dogs? A Ladies Hunt Weekend of course!

For the past several years Calibered Events has run ladies only hunt events, designed to get more women into shotgunning and bird hunting. This was my fourth year of participation, so I’ve now got three pheasant hunts and a duck hunt under my belt.

What keeps women like myself coming back to these events year after year? It’s the opportunity to continue honing skills, and the camaraderie with other women interested in hunting.

But why an organized women-only hunt, you may ask?

Let’s be honest – bird hunting is a “lifestyle”. If you don’t have your own trained bird dog and property to hunt, this is not likely to be something that most of us women can just “pick up” as we go along, especially later in life. We need coaching and encouragement and access to experienced guides with dogs. That is exactly what these ladies’ hunts provide.

Although Calibered Events is based in Western Maryland, women come from several surrounding states – including Ohio, Pennsylvania, Delaware and West Virginia – to attend the annual events. Organizer Ann Marie Foster  provides shotgun coaching and hunting mentorship to women both experienced and novice.

The events combine clays/5 stand practice on Friday, with a hunting experience on Saturday, and a group vacation house/ sleepover atmosphere. The group stay-over builds camaraderie and allows shared experience for those who may be nervous newbies.

After the experience, even if new women don’t want to rush out, buy a dog and become new bird hunting enthusiasts, they have at least had the experience, have supported local guides, and have been exposed to game habitat and harvesting meat in a way they may not have before.

My own latest ladies hunt weekend was two weeks ago. We started out with seven women, but one of our party was ill and had to leave early. So we had seven for clays on Friday afternoon, and a hunt for six on Saturday.

This particular group had experience in doing this before – not only the hunt portion but the get-together house-party portion. With everyone bringing different types of food to share, you’d have thought we were feeding Patton’s 3rd Army rather than six middle-age women for one weekend!

We started out the weekend with a Friday meet-up in Western Maryland, whereupon we proceeded to the Wild Wings Hunting Preserve property to meet our host and shoot some 5-stand.

The 5-stand set-up on the property was a new addition this year, and it gave us ample opportunity to work out the skills cobwebs on multiple challenging presentations. Our trapper was owner Don Calhoun who runs the operation, with wife Lisa (who provided a yummy hot homemade meal on hunt day, as well as bird-cleaning services.)

One of the presentations (Trap 4) was the toughest, and the term “number 4” became the running joke of the weekend. It was a fast, dropping crosser, and you had to stay ridiculously far ahead of it. We worked hard on that one, and by the end of the afternoon, I think everyone had hit it at least once. After the hunt the next day, one of the gals described some birds they saw as “definite number fours”.

After clays, we retired to our vacation house digs for the weekend, divvied up the bedrooms and settled in for an evening of fun. The food and wine flowed, and the cutthroat games of Parcheesi commenced. One hitch in the evening occurred when we discovered that the rental company had not provided dry firewood for the fireplace, so we called in reinforcements. Our hostess did not live far away, so her husband and brother-in-law rode to the rescue with a load of dry firewood! Yours truly, being the former Girl Scout of the group, then set us up a warm blaze.

Saturday morning broke with frosty wind, and rain. We heard from the outfitter that the birds would be unlikely to fly in such conditions, so we gladly accepted when he offered us the opportunity to move the hunt to the afternoon when the forecast looked better. The fields were still wet on our arrival, and the sky started out overcast, but slowly broke into blue through the course of the afternoon.

We separated ourselves into two groups of three women – each group with their own guide and dogs. My group’s guide was Chris, with his dogs Freda and Blitz.

Our quarry were pheasant and chukar that had been released for us to find. We donned our orange, loaded our shotguns and away we went. Our guide led us through the strips of field preceded by the dogs – who were bounding through the hip-high sorghum like dolphins in the ocean. I never get bored watching bird dogs work. It’s a ballet of nose and tail. It was obvious that they LOVED it. Their hindquarters were literally vibrating with anticipation as soon as they got out of the truck. It was a beautiful day afield.

I’ve found over the course of these experiences that I really love the smell of the wet earth and dead leaves combined with the sent of fresh spent powder when I open my shotgun breech. The smell evokes the same feelings as fresh hot coffee in the morning – a kind of “Ahhhhh” feeling. It’s a visceral reaction that I never would have anticipated before I started this journey.

Our group of three bagged 16 of the 21 birds that had been released for us, which wasn’t too bad considering two of us hadn’t hunted like this since last year, and one of us not for several years.

The other group did not have as much luck as we had, but it was apparently windier with worse conditions in a different field higher up the hill. But we split the birds evenly and everybody got some meat to take home.

When we got back to the preserve lodge, there was a delicious hot dinner waiting for us, which we devoured greedily while Lisa finished cleaning our birds for us. Last year I got to help clean, but this year Lisa was way ahead of us, having collected some of the birds from us while we were still in the field. As a result of her efficiency, the job was nearly finished by the time we returned.

After our meal, and thank-yous to our hunt hosts, we returned to the rental house, showered, and began another evening of fire, fun, and food. There was still tons of food, including venison tenderloin on the grill. Some of the gals cleaned and brined their birds for freezing that night. The rest of us kept them in the fridge for prepping at home.

Sunday morning meant it was time to pack up and head for home, but we each swore we’d be back again and started making plans for next year.

If you are interested in an adventure like this for yourself, check out Calibered Events, or check around in your own area of the country. There are likely outfitters that would love to host a ladies only group hunt, if you’d only ask for the opportunity.