I had the most fantastic experience the other weekend. I was hunting with a group of women on a ranch in Texas. The reason we were all together in that location was because of a new program created by the women who brought you Babes With Bullets. It’s called LACE, for Ladies Adventure Camp Experience.

LACE was started a couple years ago by Deb Ferns and Kay Miculek. Having had so much success in training women to safely handle handguns over the past 15 years in Babes With Bullets Camp, they decided to try using a similar format for introducing women to hunting.

The location for this adventure was the lovely Hawks Double Mountain Ranch in West Texas, which has opened its gates to serve the public only relatively recently.

HDMR is a high fence ranch of about 25,000 acres or about 40 square miles. That’s a lot of territory for game to hang out in.

Our group of eight ladies (and a couple husbands) were there to hunt cull doe and hogs. The ranch needs to harvest over 200 doe a year just to keep the population under control. Hogs are invasive and also need to be controlled. Doe meat tastes just as good as trophy buck, and pork chops are always a plus, so this hunt wasn’t entirely for “sport” – it also helped with necessary herd management and provided meat for the lady hunters.

Those two purposes came together nicely to offer our ladies’ group ample opportunity for a novice or near-novice hunting experience, under the guidance and assistance of the ranch.

To back up a little I need to point out that I’m not technically a “new” hunter. I’ve been deer hunting on family property several times in the past 8 years or so – both with family and by myself – and even a handful of times on state land with a crossbow. I’ve just never been successful. So, I’m not really “new”, but I’m still a novice. My last day of last year’s season was the closest I’ve ever come. And although it was a thrilling experience, I still had an empty freezer.

This year I decided to look for something different. Enter LACE camp.

All of the staff of both LACE and HDMR were welcoming, gracious, helpful, and accommodating. Overnight arrangements on the ranch ran the gamut from bunkhouse style to private cabins. Family style meals prepared by the folks at HDMR were delicious. My game meat palate expanded even further as we were served bison and oryx – both of which were wonderfully tasty!

My hunt guides over the course of two mornings and two afternoons were Justin and Rachel. Although my guides were female, the male guides were just as welcoming, supportive, and helpful as the women. So no worries in that department for any woman considering a hunt like this.

The game blinds that I was in were all elevated and enclosed. That helped with comfort in the wind, in addition to controlling scent and sound. I had a bit of a hacking cough, so the sound control was especially helpful. I’m afraid of heights, and thus have not used a tree stand at home. I can see now though how helpful the elevation is. These blinds didn’t make me nervous except for the few seconds when I was actually on the ladder. The rest of the time they were very comfortable and functional.

I’ve never spent any time in Texas before – besides changing planes at DFW, that is. One of the things that struck me about this ranch is the difference in terrain from what I’m used to at home. There was mesquite and cactus instead of the oak, poplar, and black cherry I’m used to. Also, because of the size and remoteness of the ranch, it was soooo quiet there. It was glorious! At home, even when I’m alone in the woods I can still hear trucks on the interstate a few miles away. This ranch though, was auditory heaven. I can also categorically agree that, “The stars at night are big and bright deep in the heart of Texas”.

The guides who worked with me were so much fun and very informative. Even if I hadn’t been planning to do any shooting, the experience of glassing the game from the blind was interesting and exciting. One evening we watched 4 bucks, 2 immature doe, another larger doe, and six turkeys all show up in the same  two-hour time frame.

Although there are feeders and blinds on this ranch, it is STILL a hunt. With 25,000 acres, the game can be almost anywhere (or not) on any given day. As illustration, although the place is overrun with hogs and thus why they need to be controlled, I only saw two hogs during the two mornings and two afternoons that I was in a blind. I took the first one, and I’m glad I did, because the second one was big and ugly and would not likely have provided tasty meat. I’ve heard that on other days, the hogs run in herds. On my days they were singular. You can never tell. That’s why they call it hunting.

The doe hunting was not unchallenging either. Since the bucks are managed carefully, and we were not there to hunt them, they became an impediment to the doe hunt at times – especially because it was the rut. Finding a clear shot on a standing doe when a buck (or more) is chasing her, takes patience. It gave me a lot of scope practice. That was when having a guide along to advise me was especially helpful. The guide could watch the bigger picture while I had the small scope picture. It was all very interesting and educational.

By the end of the weekend, I had harvested one good size eating-hog, and one small cull doe. Unlike at home where I would have had to field dress and drag my own deer back to my own vehicle, the folks at the ranch took care of all that. I asked if I could assist with skinning my hog, because I wanted to use a knife a friend had made for me, but otherwise they would have taken care of all of it for me.

Some of the gals drove their own vehicles to get to the ranch, so they packed their meat in coolers to take with them. Since I flew, I made arrangements with a local butcher to process and ship my meat to me. I had to go buy a small chest freezer when I got home, and now my freezer and I are waiting expectantly!

Although LACE camp has loaner bolt action rifles for the women hunters to use, I brought my own rifle and ammo. Reason being that I built my AR .308 myself from Aero Precision parts. You can read more about the rifle angle here, but suffice to say that at least part of the thrill of this hunting experience was the fact that I harvested these animals with a rifle I built with my own two hands! It took fifty-six years, but I am finally a bonafide deer and hog hunter!

I want to thank everyone responsible for this event – from camp sponsors,

Hoppe’s, Champion, Bushnell, Mossberg, and Fiocchi, to LACE organizers Deb and Kay, to all of our guides and ranch wranglers, to Aero Precision and Black Hills Ammunition on my personal end. Last but certainly not least, I want to send a huge thank you to Joe Nixon – ranch manager, and everyone at Hawks Double Mountain Ranch for sharing your lovely facility with us. Your Texas hospitality is truly outstanding! I could not have asked for a better experience! 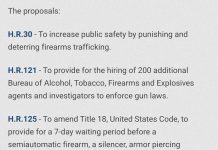