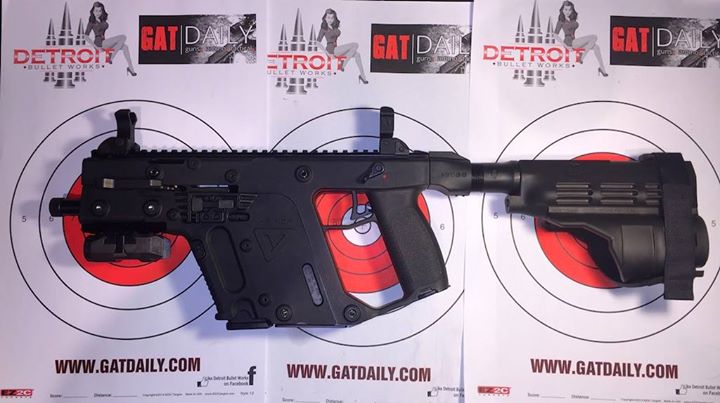 Not too long ago we did a review on the Kriss SDP also commonly referred to as the Kriss Vector. The Kriss is a revolutionary gun, completely different from anything else on the market. This drastic shift in design is either loved or hated by those that shoot it. You can read all about our initial impressions and the features that make it different in our original post.

Unfortunately for the civilian market the gun as it was originally designed would be classified as an NFA Short Barreled Rifle. This makes it illegal to own in several states and harder to get in many others, not to mention expensive requiring a $200 tax stamp. Without the brace, you will find that we didn’t enjoy the Kriss as much as we originally hoped we would.

Thankfully the team at Sig Sauer invented the nifty Sig Arm Brace, and the ATF has ruled that the brace may be shoulder fired without being considered a stock or SBR.

Kriss has gone and used this nifty invention and the associated ruling to offer the Kriss SDP in a configuration closer to it’s original design.

Using the new Kriss Vector M4 Stock Adapter retailing for 59.95 you can now replace the QD endcap on the SDP with an M4 adapter. When combined with a KAK Super Sig SB-15 Pistol Buffer Tube ($42)and the Sig Brace you end up with a pistol compliant gun, that is easy to fire and so much fun to shoot.

I have bought upgrades for most of my guns I use on a regular basis. Tungsten guide rods, new barrels, triggers and such are just a few examples. In all my years shooting, with all the products I have tested, never has one change made such a monumental difference to the stability, fun and accuracy of shooting a weapon.

One thing that makes a huge difference is the choice of pistol tube you put on this “Franken” Kriss. A standard pistol tube will not give you the length of pull needed to truly enhance the ergonomics. However, when used with the KAK Super Sig tube and the available Sig Tube Length adjustment kit you will achieve a very natural length of pull.

Check out the video to see how easy this gun is to shoot. You may notice in the video the Sig Brace moved a little bit. The reason was we had had the Sig Brace on a Phase5 pistol tube originally. Since they make the tubes a bit thicker than standard, it had stretched out my poor brace like a virgin on prom night. We have since tested an unmolested brace on the KAK Tube and found it to be very stable and secure. 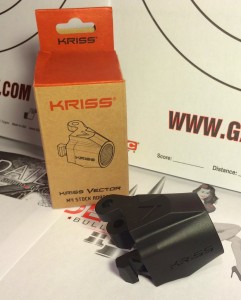 The Installation of the M4 adapter on the SDP is not for the faint of heart. I had started the project in my home shop, but ended up taking it to a buddy who is a gunsmith to help me complete it.

The instructions that come with the M4 adapter are designed for users who already have the SBR folding stock version or who have the carbine length system. There are no instructions for the SDP users, so I am going to try and help you all by walking you through here.

Unload and check for clear on your weapon.

Get a punch, hammer and vice. Vice the gun in place using rags or a non-marring vice grip to avoid damaging the finish of your gun. Now bang the ever living hell out of the pin that holds on your butt plate. You will need to destroy this pin in the process there is no way to save it.

Once the pin is removed you will need to slide the end plate off the gun by pushing from the opposite side of the hinge towards the hinge side. This will leave you with a nub that is screwed in. Unscrew this using an Allen wrench and all that is left is a nut that is captured and irretrievable.

You will now need to unscrew the top rail of the gun allowing you to slide the picitany rail forward enough to pop the top off the pocket containing the captured nut. Once you do this the nut slides out easily.

Reverse steps four then three so you now have assembled gun awaiting the end plate. You can now follow the instructions that come with an adapter on how to install. You pop the piece in place and slide in a pin.

As mentioned in step 2 your going to destroy the pin that is in the existing SDP (not an issue with the carbine or SBR versions of the gun). Before you embark on this project make sure, you have a replacement pin. You can order these direct from Kriss. As we were unaware of the issue, we had to order one after undertaking the project. If you’re like me having this awesome gun waiting to go and unable to shoot due to a pin, you’re likely to go mad. This needs to be a fixed pin to comply with ATF pistol regulations according to my contact at Kriss.

So once we had the new pin and the installation was complete we headed to the range. How big of a difference did the stock make? A complete difference. So much so that it was almost like shooting a completely different and new gun.

It was even easier and faster to get rounds off in a controlled manner. When rapid firing 45 rounds muzzle rise was almost non existent using the brace to stabilize the gun. Balance and feel of the weapon greatly improved as well.

With the extended KAK pistol tube, we had a comfortable length of pull yet still were able to fire the weapon closer to the body then we did in the SDP configuration. This resulted in a large advantage when testing use for a CQB or home defense scenario. When under high stress your body’s fine motor control will lock up so having a shoulder fired weapon with a more natural point of aim your going to be better off.

When looking at this as a truck gun, which we have already determined the gun would at, the advantage of the extra stabilization only makes it a better candidate. While you are adding length to the gun in an ultra confined space by adding the Sig Brace, you may find the added control and shootability can offset the added space needed to store the weapon.

As a bug out, go bag SHTF weapon this is a hands down winner. Small compact and in a caliber that is fairly easy to scavenge for, this gun has so many plusses. Using the extended mag and todays advanced hollow point ammunition this gun would allow you to overcome almost any situation you may face in a world in chaos. Even with the Sig Brace installed the gun can fit in a larger backpack or duffle bag easily, where only the shortest of pistol AR’s may fit.

As a safe queen, this is frankly one of the coolest guns on the market. The addition of the Sig Brace and the bragging rights of being one of the few to own a weapon in this configuration as it is so new is pretty damn cool. I always take more pride in guns I worked on then ones I bought stock. This upgrade will give you not only a better gun but will make you feel like a full fledge bearded machinist when you’re done putting it together.

I always wanted a Kriss from the first time I saw one. Initially settling for the civilian version the disappointment of a spending $1800 and getting a weapon that didn’t fulfill my initial expectations was hard. However with the addition of this $45 part and the KAK Pistol combined with a Sig brace I now have exactly what I always wanted. This small additional investment made this gun 1000 times more enjoyable and more practical.

All testing was done with 45 ACP 185 grain hollow points from Detroit Bullet Works.