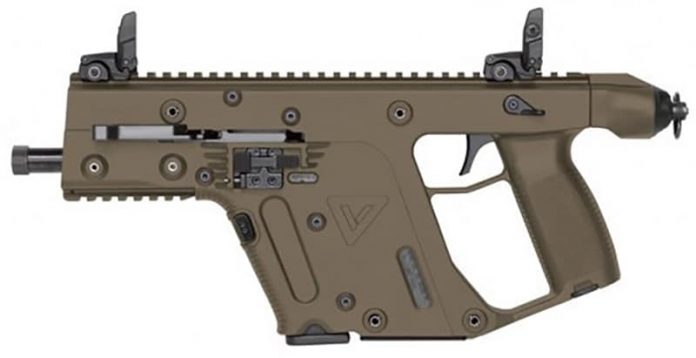 “The Vector is now a viable option for hunting, in addition to being more rounded for personal defense and competition shooting, thanks to the wide variety of projectile weights and the high velocity nature of the 10mm cartridge,” the company said in a statement.

The Vector uses 15 round, Glock branded G20 magazines; though 10 round California, Connecticut and New Jersey complaint mags are available as well.

Each flavor of Vector comes with its on unique features, setting them apart from one another.

The SDP version is a non-NFA regulated pistol that features a quick detach sling swivel at the rear and 5.5 inch threaded barrel. Price starts at $1,369. For an extra $150 , consumers can chose the SB model which adds the tactical, stabling brace to the package.

CRB, or carbine variant, pairs the six position adjustable stock with a 16 inch barrel for long range shooting. MSRP is $1,519.

The SBR model falls into NFA territory, but features a six position adjustable stock. Without the tax stamp, the gun runs $1,569.

The Vector SMG, only available to law enforcement and military, comes equipped with a side folding stock and 5.5 inch threaded barrel. Interested parties must contact Kriss for pricing.

In addition to choosing a specific model of Vector shooters will also get a say in Cerekote color, choosing from black, flat dark earth, olive drab green, combat grey and alpine white.