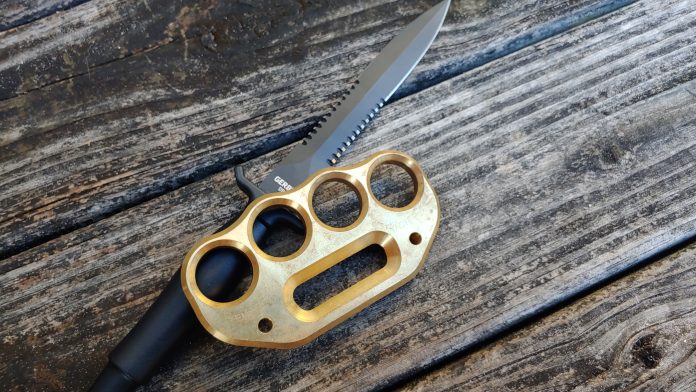 Knuckle dusters have been around in some form or another since the glorious days of Rome, and likely well before. The earliest examples come from Gladiators, Indian martial artists, and Sikhs. Various gauntlets have built-in weapons that allow for close range scraping throughout armored history. Knuckle dusters have been made from wood, cast iron, lead, and of course, the famed brass knuckles. These days aluminum variants and even polymer knuckles kick around of varying qualities.

The idea behind the weapon is simple. The strongest person can only throw a punch so hard. The addition of a knuckle duster transfers more energy per punch, on top of protecting your hands and adding a material that can cause cuts and abrasions. A good heavy set of knuckle dusters add substantial kinetic force to your punch, and when combined with unforgiving metals like brass, they can crush bone.

Let’s not pussyfoot around here. Knuckle dusters, or brass knuckles, are deadly weapons not different than a gun or knife. These tools are part of the lethal force area when it comes to the escalation of force.

The deadly effectiveness of knuckle dusters made them an excellent tool in warfare. Civil War soldiers carried knuckles for close-range fighting. When your gun fires at an effective rate of 2 shots per minute, the enemy can close the gap quickly. A set of knuckle dusters and a good knife were very handy in close quarters fighting. People forget a good deal of the Civil War was fought in trenches, and when men are coming over the breach, they could be well inside bayonet range before you can react.

Speaking of trenches, knuckle dusters were a popular item in the meat grinder known as World War 1. Again the same slow rates of fire the majority of weapons had combined with the sudden close-quarters trench fighting made a lethal punch a handy tool to have. The Americans issued the Mark 1 Trench knife, which combined a fighting knife with a set of brass knuckles as a close-range force multiplier.

World War 2 proved that knuckle dusters were once again a popular choice, with private purchases by American troops being common. America reissued the Trench Knife in small batches, and the Brits had their own Death’s Head knife with a set of knuckles built into them. In a post World War 2 landscape, war moved faster, weapons fired faster, and close-range fighting was done with carbines and not bare hands. The landscape changed, and brass knuckles fell out of favor.

Oddly enough, during your Author’s time in Afghanistan, knuckle dusters were quite common among Afghans. From weapon caches to everyday citizens and marketplaces, they seemed to be a popular weapon. Most were made from pot metal and likely originated in China. Many of us who purchased them had them confiscated at customs.

Knuckle Dusters and Self Defense

Modern, high-quality knuckle dusters are still sold, and so are pot metal junk ones, and plenty of polymer models exist as well. Companies like Empire Tactical produce high-quality aluminum and actual brass knuckles that are precision machined and made in America.

Gun shows and flea markets are plagued by cheap models and the key chain style polymer knuckles that often look like a dog or cat. Regardless they are still considered knuckle dusters in the eyes of the law. 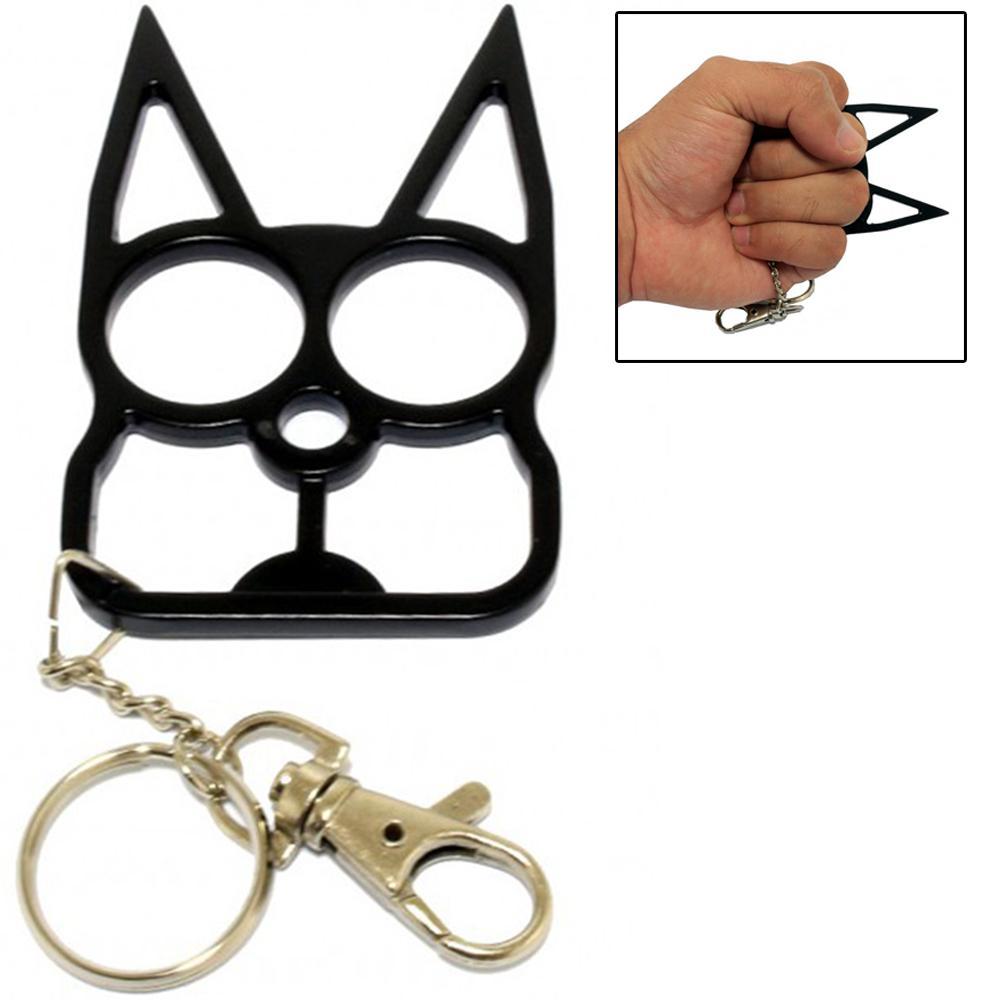 That’s where we can start our discussion on knuckle dusters and self-defense. It’s a bad idea for a few reasons. The first is the fact they are most likely illegal to carry in your state. Texas recently made them legal to carry, but that’s Texas. 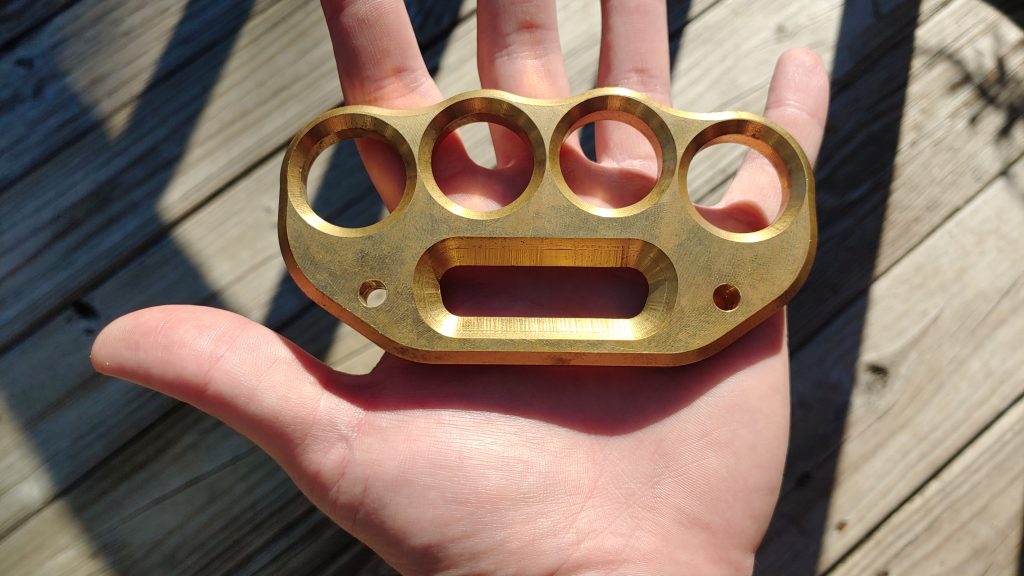 The second reason why they are a bad idea is that if you can use brass knuckles, you can use a gun. Both are deadly weapons, but a gun is much more effective and easier to use in a likely self-defense scenario. If you’re close enough for knuckles and they are legal, you probably should have grabbed your gun or knife already. They just occupy a worst of both worlds legal and practicality niche. 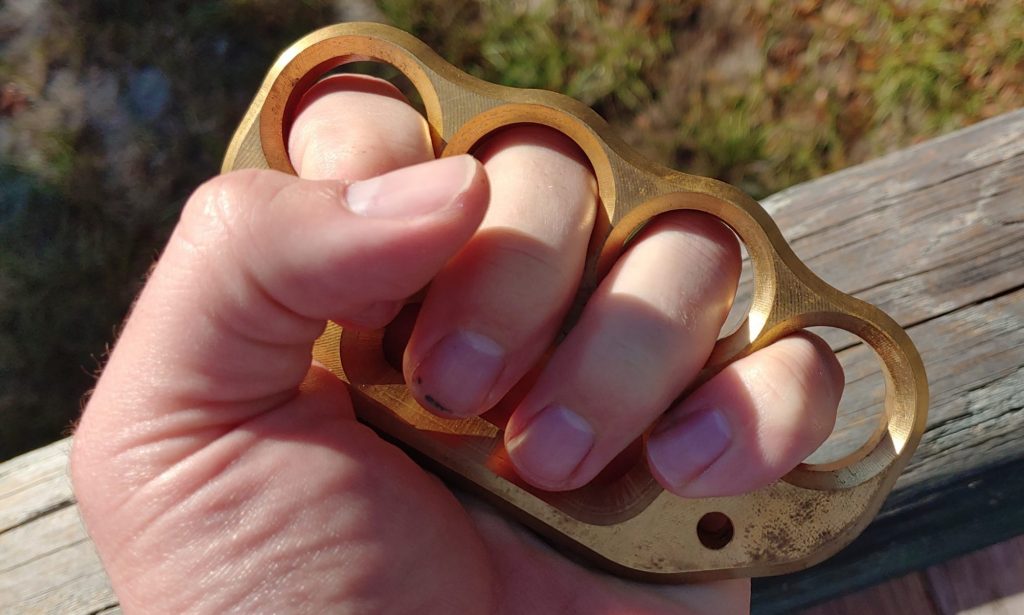 That being said, they are cool as hell. My set of Empire Tactical Brass Knuckles is 16 ounces of brass and kick ass. They are a neat conversation piece, or maybe as part of a collection. While these things are deadly weapons, they are better suited as collector’s items and badass paperweights these days.

At least until trench warfare makes a comeback.