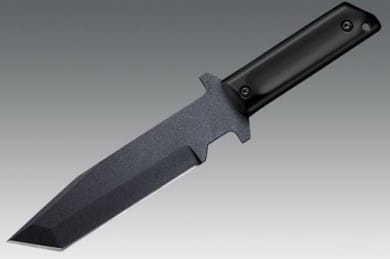 This week’s destruction test features another Cold Steel–the G.I. Tanto, which retails for $41 on Cold Steel’s website. The G.I. Tanto has a 1055 carbon steel blade and a polypropylene handle. It’s a knife marketed toward survivalists who may want to employ this knife in self-defense. Cold Steel’s website reads, “As its name suggests, our G.I. Tanto is a no-nonsense tactical knife that comes with a legion of practical uses. … Heavy, sharp and wonderfully balanced, it’s easy to throw by either the blade or handle and it hits with real vigor.”

Cold Steel also claims that “it’s ready to take all the abuse you and Mother Nature can dish out.” Noss puts that to the test in this destruction test. He starts by slicing an orange and through a piece of cardboard, which it does without incident. Then, he hammers it into a piece of wood with another piece of wood, and follow this with some freehand chops against a 2×4. This does little damage to the knife so far. But using the tip of the knife to splinter wood snaps the tip off. Hitting the blade on concrete also wears down the knife further, and the blade eventually snaps off completely during a pressure test. So it seems that Cold Steel’s claims aren’t entirely accurate; there is some abuse that the knife simply can’t stand. But it puts up a good fight.

Catch up on past tests at KnifeTests.com, and view the 8-part test below as a playlist. 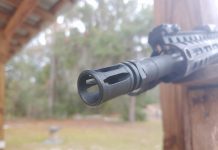