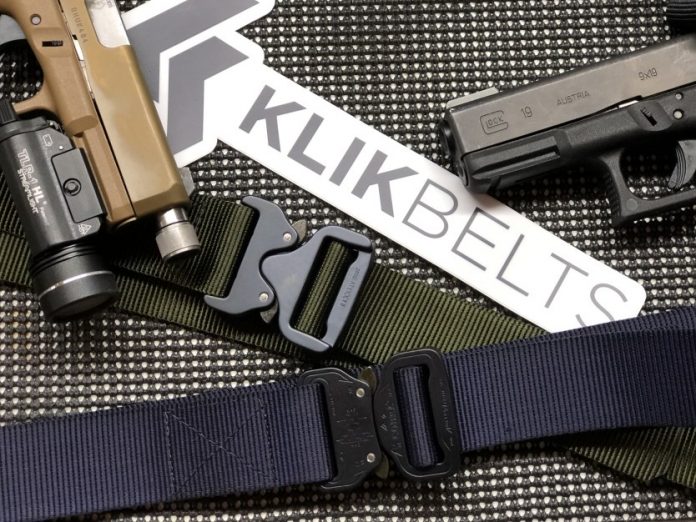 When you order a belt from Klik Belts, you’re not just getting a belt — you’re getting a lifetime commitment from the company itself. It’s tough to beat that.

When it comes to duty belts, concealed carry belts, or gun belts in general, there are a number of manufacturers out there with products I can recommend whole-heartedly. I mean, let’s be honest, the things that make for a good quality pistol belt aren’t elusive: the material of the belt needs to be stiff enough to support the weight of your gear without bowing outward, the buckle needs to be strong enough to support the weight of what you’re carrying, and hopefully you can get both of those things in one decent looking package. So, if you’re looking for a good choice in belts (whether you’re a recreational shooter or a cop that relies on your belt every day), you certainly have some options. But if you’re looking for the best choice, it helps to consider some other things, like customer service.

Klik Belts’ line of products certainly meet and exceed the baseline criteria required of a good quality belt. Their two-ply tactical belt offers very little give without becoming a nuisance and is just as at home as an EDC belt run through your belt loops as it is strapped over your hips as a quick release gun belt. And much to my surprise, even their single-ply belts (which Klik Belt don’t recommend for use with a holster) has served me extremely well with the Bravo Concealment IWB holster I’ve been wearing to review for the past month or so. It’s easy to see why: not only are Klik Belts made right here in America (Austin, Texas, to be exact) using the best materials they could get their hands on, but they also come equipped with Cobra Belt Buckles. These buckles are incredibly strong… how strong? One held up to 5 1/2 tons of pressure before letting go in one test… so yours ought to do fine even chalk full of gear and fighting back your gut after Taco Tuesday.

Klik Belts may make their belts on site, but they sourced these buckles from Austria for a reason. Here’s what they have to say about the Cobra Buckle:

Patented AustriAlpin COBRA® quick releases are, without equal, the safest, most finely crafted, and strongest load bearing buckles available anywhere. They are also the only stab-lock style fastener in the safety products market that will not open while under load. That makes them the best choice (we believe, the only choice) for ensuring the highest degree of safety for yourself or your customer. COBRA® quick releases are CNC machined, assembled, inspected, and packed (re: from alpha to omega) in our ISO quality assurance acredited facility. All COBRA® products are tested and certified by highly respected independent /3rd party test houses and exceed Mil Spec guidelines for dust / sand / salt water as well as all applicable CE, EN, CSA, ANSI, and NFPA standards for fall-protection and personal safety.

The belts and buckles are just as high quality as they’re touted, but what really sets these belts apart from other good quality belts is their lifetime warranty and the level of customer service you get when you order one. I spoke to Dona at Klik Belts who immediately set about making my new belts to order based on my (decidedly embarrassing) measurements. Even made to order, the belts arrived in no time and I immediately set about trying to ruin them so poor Donna would have to hunker back down at her sewing machine and send me some new ones. She was so nice when we spoke, I really didn’t think she’d mind… but after weeks of punishment, the best I could do was leave a bit of white gunk on the nylon portion of the belt (maybe a mix of bug spray and sunscreen). Beyond that, I just couldn’t manage to break, fray, or otherwise mess up these belts.

I haven’t given up yet though, and eventually, I’m sure I’ll manage to do some kind of damage that leaves my belts un-serviceable, and when I do, I won’t have to buy a new one. I can just send the buckle back in to Klik Belts with a crisp $20 bill and they’ll send it back to me good as new. They’ll even adjust the size if I’ve gotten fatter (or hopefully, thinner) by then.

I won’t pretend that there are no other good quality belt options on the market, but with prices starting under $65 for a double-ply tactical belt you can wear for the rest of your life, I honestly couldn’t recommend any option that isn’t from Klik Belt. You can get them in a variety of colors and despite the utility allotted by the Cobra Buckles, these belts look just as appropriate in a pair of khakis as they do on your jeans or hiking pants.

When you order a belt from Klik Belts, you’re not just getting a belt — you’re getting a lifetime commitment from the company itself. It’s tough to beat that.