In Part 2 of our ongoing test of the Kimber Pro Carry II, we’re doing one of my favorite staples: the 100 Round Challenge. The idea behind this test is to shoot 100 rounds as fast as we can out of the gun. What this accomplishes is it shows how well the gun holds up during sustained fire. When parts start to get hot, especially in small handguns, sometimes weird things happen.

There isn’t any training value from a shooting standpoint to running 100 round challenge through a gun in a minute. You’re certainly not honing any marksmanship skills, you’re just hammering bullets into space. You don’t even need a target, really. You could just shoot at a pile of dirt and accomplish the same thing. The entire point is to test the gun’s mechanical function.

Right off the bat, the Kimber Pro Carry II had a problem – three magazines in the test, the 9mm 1911 had a classic stovepipe malfunction. This occurs when the spent casing fails to fully eject from the gun. In 1911s this indicates that the extractor isn’t tensioned correctly, or that the magazine pushing the next round up has a very weak spring…or both. Since the goal of the 100 round challenge is to finish in a minute with no failures, that’s a fail.

The Kimber isn’t the only gun to not make it through the 100 round challenge without a failure. In fact, a brand new Gen5 Glock 17 didn’t pass the test either, because its front sight flew off during the rapid fire. I don’t know about you, but I definitely don’t want the sights falling off my gun when I’m shooting it fast. Fortunately, the Pro Carry II didn’t have any parts breakages, just one failure to complete the cycle of operations.

Our next episode we’re going to run the Kimber through the 10-8 Performance extractor evaluation protocol, which, as the name implies, is designed to test the pistol’s extractor. The reason we’re testing this pistol so hard is that it’s a very popular choice for concealed carry, and we want to know if it’s reliable enough to carry. 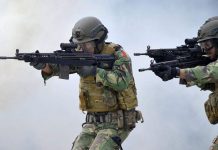