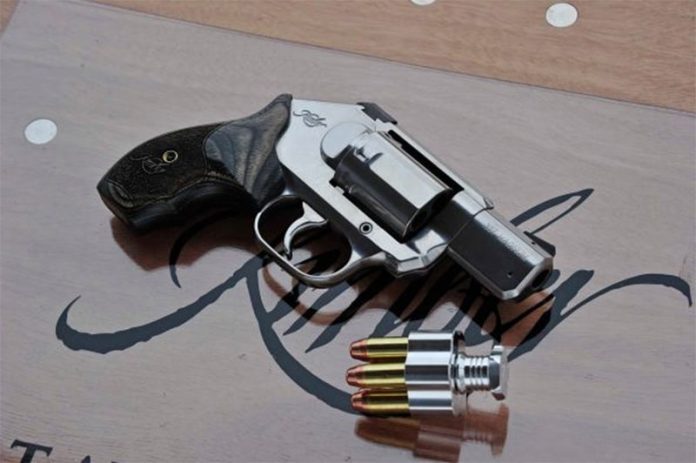 The Kimber K6s revolver is designed for high performance concealed carry. With 6 rounds of .357 Magnum or .38 Special, K6s compact revolvers provide a small package with mild recoil and the power needed for concealed carry, back-up or home protection.

The Kimber K6s’ small frame, two-inch barrel and 1.39 inch diameter cylinder are machined from stainless steel for superior integrity, strength, and resistance to the elements. The Kimber K6s offers other important design features, such as: a smooth match-grade trigger that creates confidence while helps ensure accuracy; an internal hammer and edges that are rounded and blended to help prevent a hang up when the revolver is removed from concealment; superior ergonomics and grip design that creates an extremely shooter-friendly experience; and an all stainless steel construction weighing in at 23 ounces.

fnfalguy over at Glocktalk has written a great range report and given us permission to share it.

After much hemming and hawing, I bought a K6S sight unseen. Don’t know why I decided to take a chance but I did. I never cared for Kimber M1911s and I thought that their rifles are just okay. Nonetheless this K6S looks funky and reviews were good, so I took a chance.

The gun came with a soft case AND a speed strip. I thought that the speed strip was a nice touch.

At first blush, the fit and finish are pretty good. Not great but pretty good. I dinged it for the brushed finish that while handsome, was not evenly finished. Better than a Ruger finish but that doesn’t say much at all.

Trigger pull is heavy. This isn’t a several hundred rounds session gun. It will wear your trigger finger out. However, it is smooth. Very smooth. The radiused trigger face also is a nice touch for quick DA work. It also stage-able like a Colt DA pull. Good or bad, depends on who you ask. You can pull it straight through and it will work just fine. Or you can stage it for the longer shots. Since that I’m a Colt wheelgun dude, I like stage-able DA pull.

The push button for cylinder release is positive as well. Easier to activate than on a Ruger.

The grip is comfortable and well shaped for my hand. It’s just too sticky for my CCW preference. I’ll get me a set of wooden grips to replace it soon enough. I really don’t understand Smith & Wesson, Ruger and now Kimber and Colt putting rubber grips on CCW wheelguns. Yes, they’re more comfortable to shoot but these guns aren’t meant for “comfortable” shooting. They’re meant for concealed carry and that means smallish and smooth grips (wood, micarta or whatever). But for those who don’t want to CCW it and think of it as a woods gun, then the rubber grip is fine.

Recessed charge holes is a nice feature. As is the radiused muzzle.

Overall, a nice package. I’ve seen street prices on these suckers dipping into the $750 range. 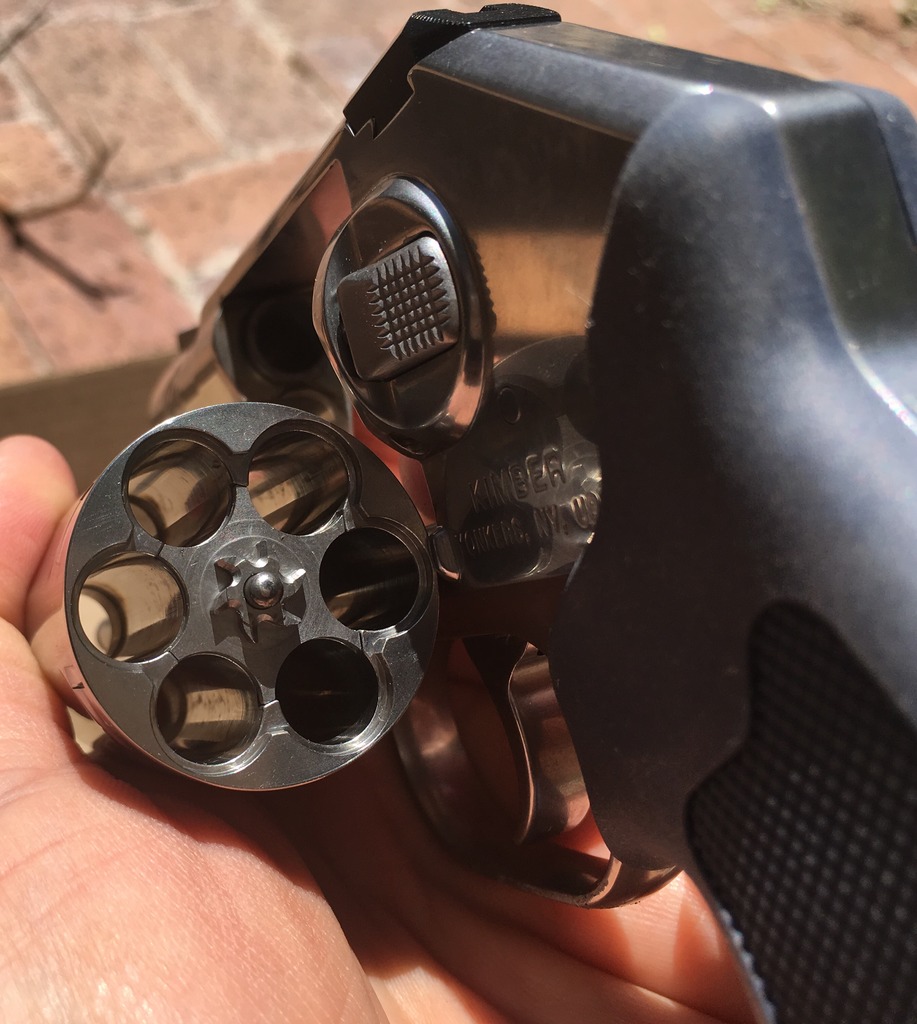 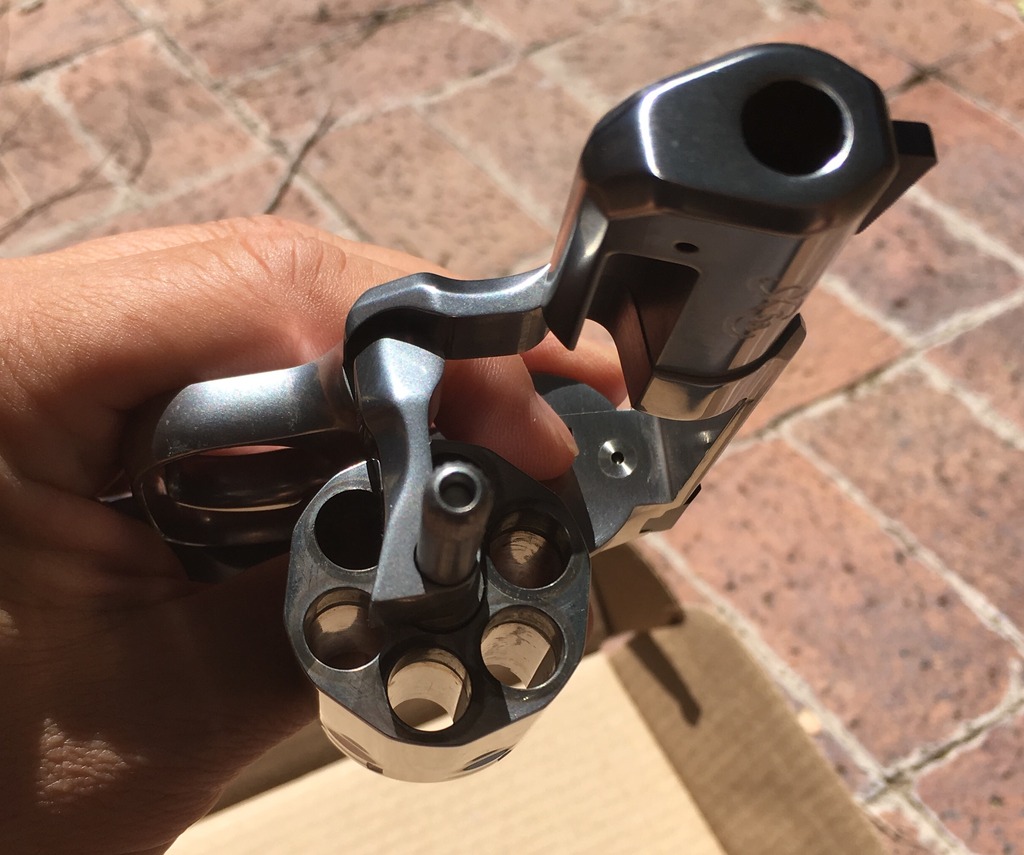 Might as well jump right in and say that this gun SHOOTS GREAT!!!

I’ll let the photos speak for themselves.

I think that the first two groups at 7-yds were suffering from my flinching due to the various DA misfiring issues with the Colt Diamondback. Nonetheless, as I started to get used to the feel of the Kimber’s trigger pulls and handling characteristics, the groups started to shrink at 10-yrds.

I don’t know about others, but I shoot best with the K6S while using the Weaver stand. I think that I overheard some snickers with the Joe Cools shooting at the next stalls because of my antiquated shooting stance…until I rolled the target back and started taping up the holes.

A young gent to my right remarked, “I didn’t think those little revolvers can shoot tight like that.” I gave him the “aw-shuck-that-ain’t-nuthin’” look. 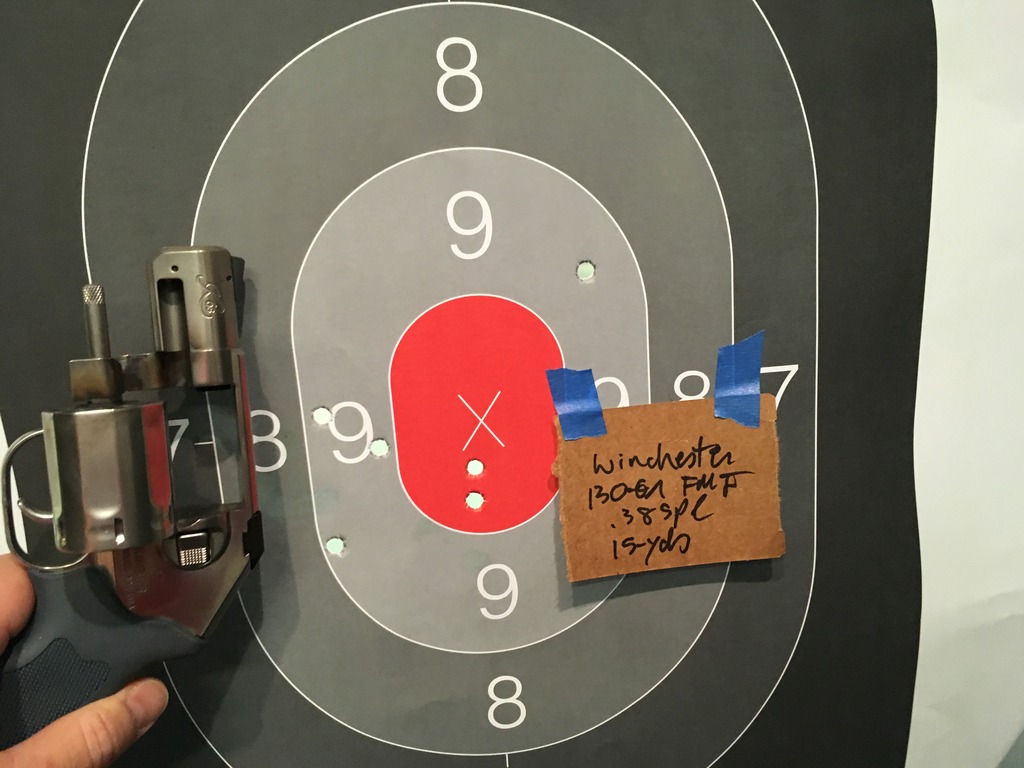 Next up were my typical rapid fire drills:

One caveat for the people with big hands and long fingers, you guys and gals might be playing bumbling fingers with this gun, possibly more than the Ruger LCR – but then the LCR has the big ass grip. There’s not a lot of room for the fingers.

At this point I’m still shooting .38 Special, and with minimal recoil from the .38 load one can actually short stroke the DA pull by going a wee bit fast. That explained my two misses at 7-yds. That’s what happened when you try to show off to the youths.

I ran out of .38 Special at this point and get ready to break out the .357 Magnum box because after all, the gun’s barrel is marked with .357 Magnum and not .38 Special. 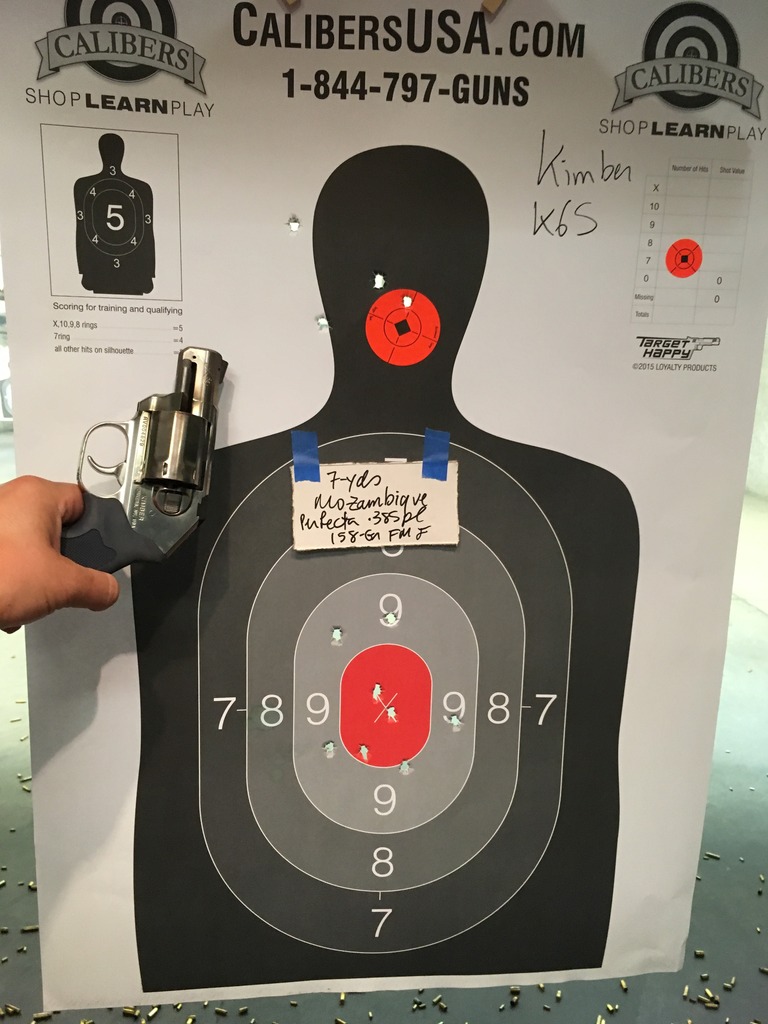 The Blazer Brass 158-gr JHP .357 Mag is definitely a handful with this little sucker. It’s manageable but just barely. Oh yeah, the palm definitely feels it!!! Not to mention the fireball and the cryin’ chillen.

The flinch from bad DA firing with the Diamondback is long gone and now replaced with good old genuine SHAKE. The Kimber snarls and spits like a raging dragon. I was tempted to yell out, “Drakarish” Or whatever the heck Danaerys Stormborn said to make her dragons start spitting fire and roasting people.

At this point I pussed out and just wanted to finish off the box of .357 without crying like a little girl. So I did a couple of groups of one-handed shooting. Yeah, it’s that bad.

In summary, I was most glad that I took the chance and bought this bad mamajama. I don’t even know if I’m going to CCW it. It’s a hefty sucker at 23-ounces empty. Not to mention, I would have stoked it with .38 Spl +P, which I would have done in the other snubbies like Ruger LCR, various J-frames or Colt D-frames anyway.

One thing for sure though, the K6S weighs about the same as the Ruger SP101 but it feels a lot better balanced. More like a lean, mean machine than a hunk of steel. It’d probably make a good woods gun. My GP100 Wiley Clapp with the 3″ barrel is a lot bigger and heavier than the K6S, and I can see the K6S taking over boondocks duty from the Wiley Clapp . 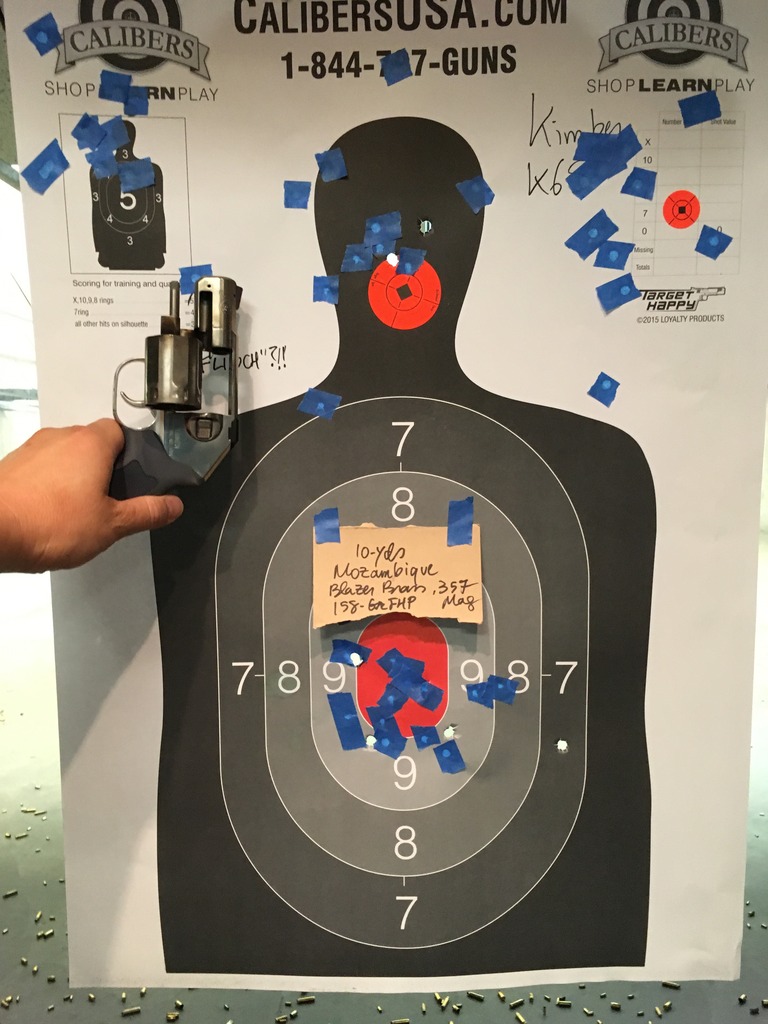 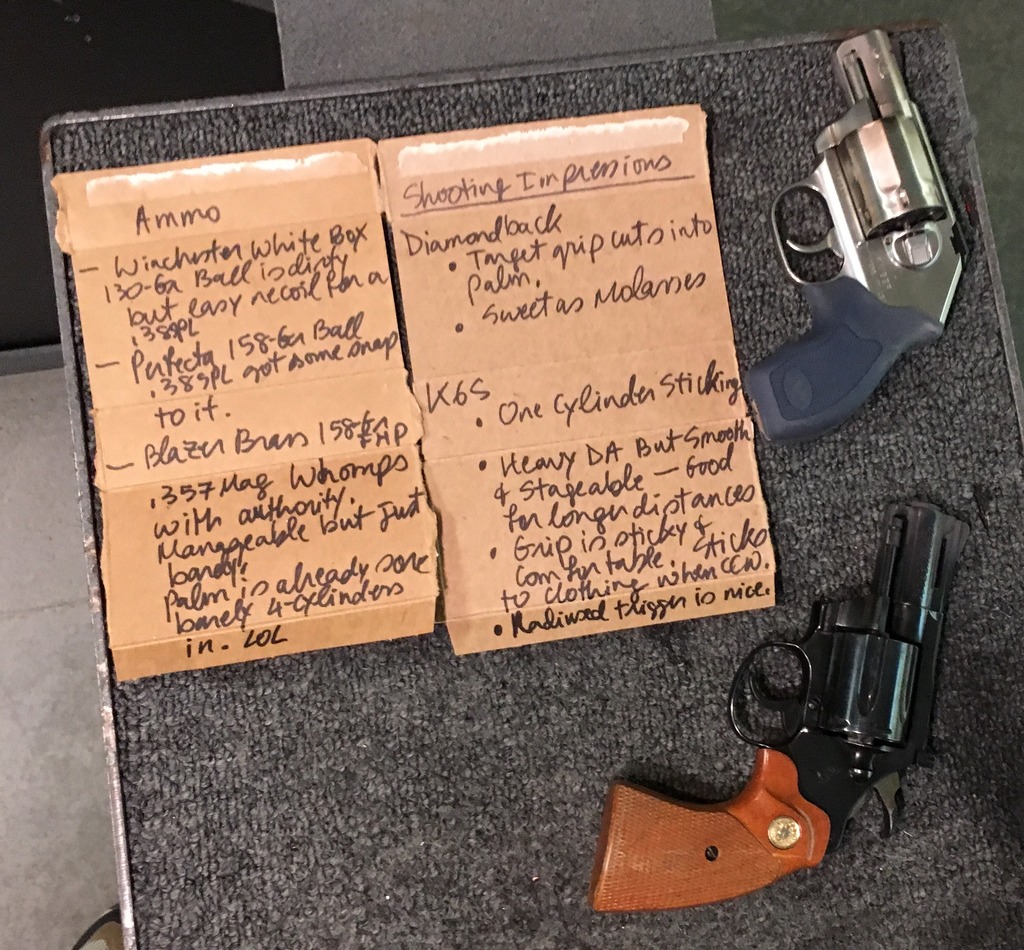