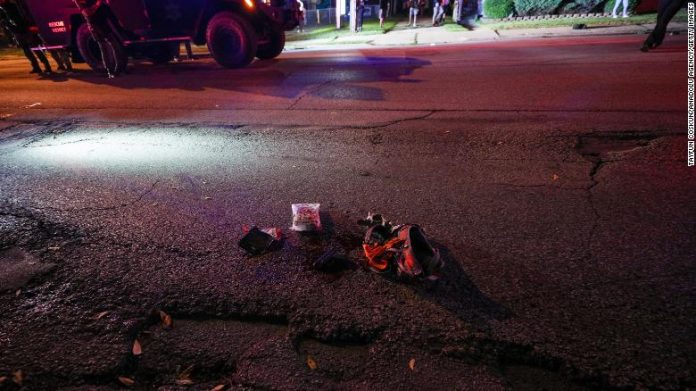 Another city has experienced protests descend into violence, and on the third night three people were shot in a single incident. Two were killed.

While an investigation is ongoing and the shared details are largely biased (predictably) based on the media source it seems that armed individuals clashed in Kenosha Wisconsin, a place I remember from childhood.

That fact hits differently when all you remember are enjoyable family trips to a city you considered rather sleepy in the grand scale. Now, chaos reins and those looking to score political points with the voting block that are in the streets have abdicated their positions and responsibilities as leaders to be seen instead as “allies” …

The entirely torched dealership with the BLM sign seems to indicate how valuable an “ally” is seen.

About the incident that started it all? It’s a mess. A man, Jacob Blake (29), was filmed walking away from police and refusing officer commands, he begin getting into a vehicle. He was shot 7 times by an officer after attempting to enter the vehicle, either to get in or reach something. He was shot in the back at close range.

Blake is alive but reported to have lost the use of his legs. Officers can be heard telling Blake to drop a knife. A taser was deployed by one officer but to no effect. We do not have a clear picture and details have not been released as to the lead up to the on video shooting. Blake is said to be very active in the community by his family, who have deep ties to Evanston and Kenosha.

It has been alleged he (Blake) stated he was retrieving a gun from the vehicle.

It has been alleged he (Blake) was at the location to help solve a domestic incident and that once officers had arrived he was leaving peaceably with his children, who were in the SUV.

The witness who filmed the video said the altercation had already gotten physical, as officers had wrestled and deployed a taser on Blake prior to starting the camera.

Blake had an active warrant at the time of the incident for third degree sexual assault, trespassing, and disorderly conduct tied to domestic abuse. It is not known if officers knew of the warrant during their attempts to detain Blake. The charges were leveled against Blake back on July 6th.

There is no confirmation from Kenosha Police detailing whether or not Blake was actually armed with anything, reaching for anything, or anything was found in the vehicle after the officer grabbed him and shot seven times, severely wounding Blake.

Protests gathered immediately in response to the shooting and they quickly turned violent. Several businesses and vehicles were burned. The Kenosha courthouse was one of the epicenters and has been a LEO/Protester clash point. Incendiaries (mainly fireworks) have been thrown at the courthouse and officers, crowd control devices were used against the crowd.

Protesters at one pointed attempted to topple a fence erected to protect the courthouse. Minor injuries, often between rioters and other protest participants, were common.

”Tonight, Jacob Blake was shot in the back multiple times, in broad daylight, in Kenosha, Wisconsin. Kathy and I join his family, friends, and neighbors in hoping earnestly that he will not succumb to his injuries. While we do not have all of the details yet, what we know for certain is that he is not the first Black man or person to have been shot or injured or mercilessly killed at the hands of individuals in law enforcement in our state or our country. We stand with all those who have and continue to demand justice, equity, and accountability for Black lives in our country—lives like those of George Floyd, of Breonna Taylor, Tony Robinson, Dontre Hamilton, Ernest Lacy, and Sylville Smith. And we stand against excessive use of force and immediate escalation when engaging with Black Wisconsinites.I have said all along that although we must offer our empathy, equally important is our action. In the coming days, we will demand just that of elected officials in our state who have failed to recognize the racism in our state and our country for far too long.”

“While we do not have all of the details yet, what we know for certain is that he is not the first Black man or person to have been shot or injured or mercilessly killed at the hands of individuals in law enforcement in our state or our country.”

This portion of the statement is seen by many as very critical of the Kenosha officers on the scene while acknowledging he did not know the details to make such a critical assessment.

It is highly irresponsible and not the attitude of a leader, it is one of a panderer. Evers could easily have stated that he would personally hold officers accountable to the fullest extent of the law IF the circumstances warranted such action. Something he acknowledged was currently unknown. Instead Evers, like many mayors and governors, threw his civil servants to the mob and the resulting violence can been seen as taciturnly approved by his statement.

At around 11:45 a group of protesters, defying the city curfew, came into contact with a young man armed with an AR-15. The protesters were also armed in part (a man who was shot had a Glock)

Unknown if the rifle armed young man escalated prior to the incendiary being thrown, although it is highly unlikely a Molotov would be admissible as a reasonable form of self defense given the circumstances.

Footage, reportedly from right after the thrown Molotov and first shots, shows the crowd pursuing the rifle armed man down the street. The man falls and the crowd begins to swarm him. He fires again from the ground as the crowd closes. His shots strike two more people who were on top of him.

One is seen collapsing and is likely the second man to have died. He struck the rifle armed man with a skateboard right after another man tried to close and stomp on him. The rifle armed man’s shots deterred the stamper but skateboard wielder struck. The rifle wielder struggles with skateboard man, who is attempting to take his rifle, and fires a shot into his chest from the ground. Skateboard wielder falls a few steps away, not moving, as paramedic hat (who is armed with the Glock) also appears to attempt to take the rifle. Paramedic hat takes a 5.56 through the bicep and runs away screaming medic.

The rifle armed young man then finishes running to a group of police vehicles, several police vehicles move toward the wounded. The title photo is from that scene, via CNN.

BREAKING NEWS: Gunman, 17, is charged with first degree intentional homicide after shooting dead two BLM protesters and injuring another on the streets of Kenosha during third night of unrest