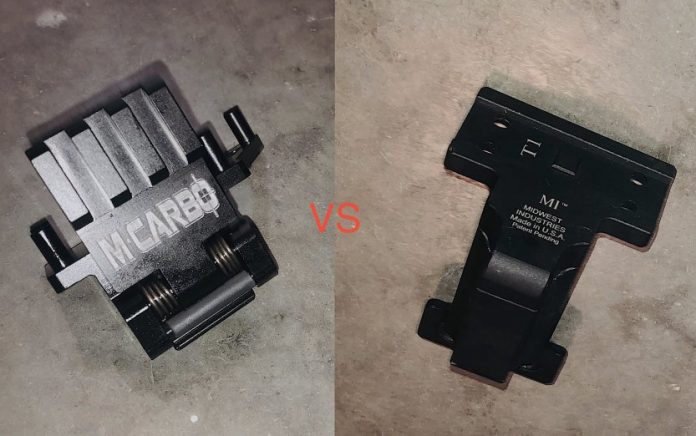 The MCARBO optic mount cost $50 more than the Midwest Industries offering, but the MCARBO optic mount is exponentially more efficient to deploy, easy to install, and functional in terms of storing and transporting the optic and weapon. The contest between these two products yields a clear winner: MCARBO.

I had every intention of doing a killer head-to-head video between the Kel-Tec Sub 2000 folding optic mounts offerings from MCARBO and Midwest Industries. Then I realized that MCARBO president, Chris Nelson, already did that. In the video, the guys from MCARBO simultaneously demonstrate deploying their Sub 2000s from a backpack and presenting their rifles with each optic mount solution.

Honestly, how do I follow that up? As a disclaimer, I own a Kel-Tec Sub 2000 (Gen 2) in .40 cal and it has tons of MCARBO upgrades installed. Just because I’m an MCARBO fan doesn’t mean that I’m not open to a better solution for a known problem like having an optic on this weapon platform, so I initially took it with a grain of salt when I watched the video above. I figured the best thing for me to do was to get my hands on my own optic mounts from each company and try them out personally to see if the results were the same.

Before I get into my own experiences with these mounts, lets compare the manufacturer specifications for each product.

Let’s get the obvious out of the way. The price for the MCARBO offering is $50 more, so is it worth it? Yes, and here is why.

If you didn’t already gather from the video above, the Midwest Industries mount works but there are several extra steps (motions) involved with deploying it. The MCARBO mount literally requires one extra movement to push the mount into place, and a simple push of a button to move it out of the way. The action is smooth and incredibly easy. The Midwest Industries mount requires the pulling and twisting of the mount to get it out of the way so you can unfold the Sub-2000, then another pull and twist to put the optic in place for acquiring your target.

Next, let’s talk about the product quality. The Midwest Industries mount, as referenced by Chris Nelson in his video, does have some significant wiggle to it. While this weapon platform is not the exactly the most precise option out there, when you’re firing and your optic is moving around (even slightly) it isn’t going to help you.

Both mounts are made from anodized 6061 aluminum but there is a clear gap in quality betwen them. The MCARBO mount is tight and crisp in terms of functionality and quality while also being more visually pleasing. Weight is virtually identical between the two products, so that is not a factor.

At the end of the day, I’m all about paying a little extra for something that functions how I want it to. The MCARBO optic mount is exponentially more efficient to use, easy to assemble, and functional in terms of storing and deploying the optic. The contest between these two products yields a clear winner: MCARBO.