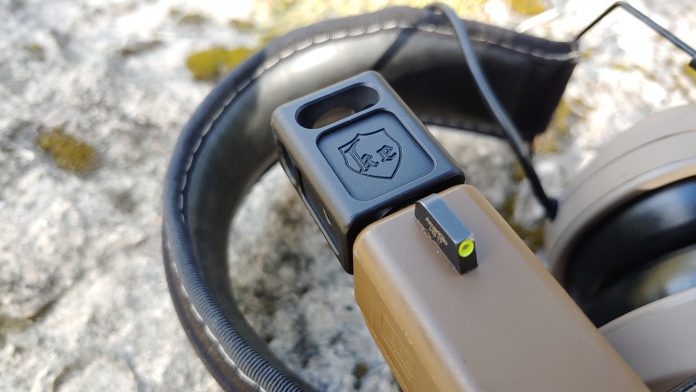 Compensators on carry guns seem to be primed to be the next topic to divide the gun-owning community. Do you need them? Are they worth it? Who makes the best carry comps? All valid questions worth exploring, and I’ve been walking that road for a bit now. I don’t have answers to those questions yet. While I pursue it, I tend to be building a good evaluation of several carry based comps and one is the aptly named KE Arms Carry Comp.

KE Arms is remarkably underrated and the crews of mad scientists over there make some awesome stuff, including an exciting polymer AR 15 lower. The KE Arms Carry Comp is designed for Glock pistols, including Polymer 80 percent lower Glocks, but will work with most handguns featuring ½ x 28 threads. The KE Arms Carry Comp is a short little fella that’s a mere .886 inches long and adds a fraction of that space beyond the threaded barrel. The comp is a 1.005 inches wide and .753 inches tall. It’s quite small as you can see and tries to add minimal bulk to your firearm.

Some bulk is to be expected for any add on, but is the bulk worth the comp? That’s the important question shooters need to ask themselves. The second question is can you find a holster that accommodates it. The point of a carry comp is to able to carry it. The KE Arms design may require an open bottom holster, but the comp is smartly designed to fit even with the Glock slide. It only adds bulk lengthwise. This allows it to be easily drawn and holstered in most standard Glock rigs. 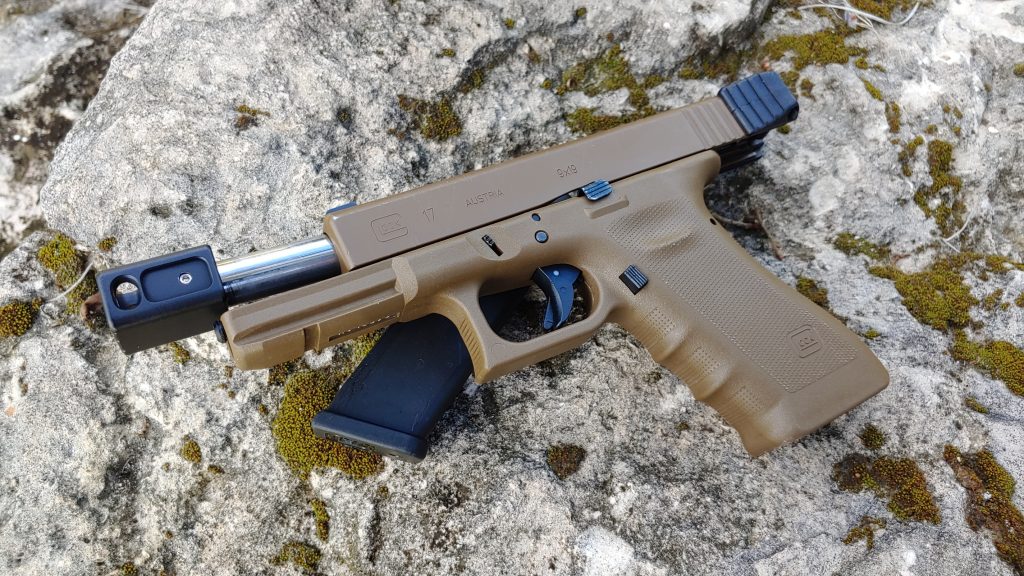 The first question is does it work well enough to be worth it? Well, KE Arms advertises up to a 40% reduction in muzzle rise. I found that claim to be a bit humble on their end. When shooting the gun with 124 grain +P JHPs the gun barely seemed to move. My platform is a Gen 3 Vickers edition Glock 17, so maybe they measured it on a smaller gun. I’d hazard to guess it’s at least a 50 percent cut in muzzle rise, if not higher. 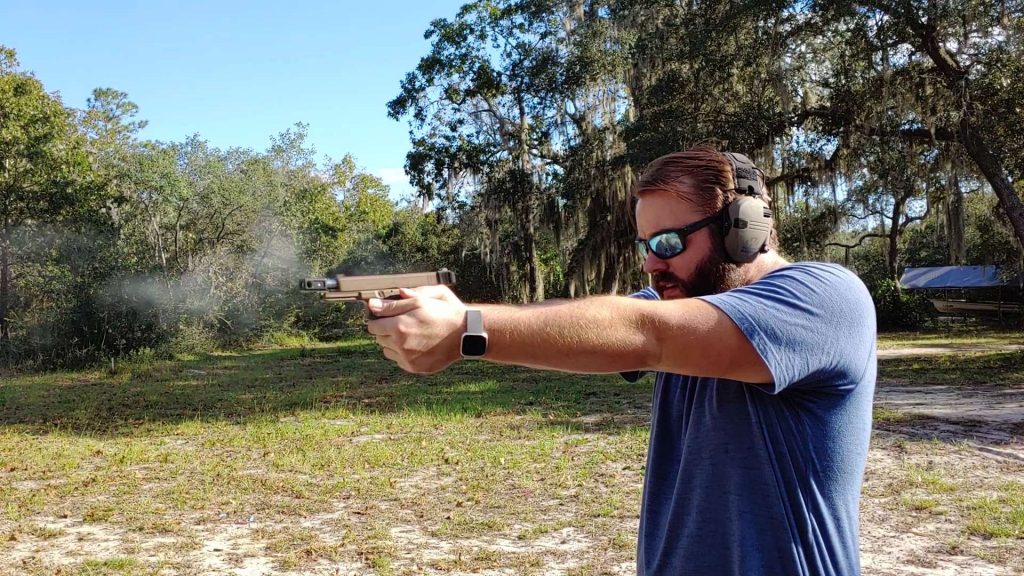 The Carry Comp’s design features a single top port and two side ports. The top port allows gas to resist muzzle rise and the side ports act as a brake to reduce recoil. Both seem to do an excellent job at what they do. Recoil and muzzle rise are significantly deflected and the Carry Comp most certainly delivers performance wise.

The reduction in muzzle rise and recoil aren’t just for more comfortable shooting but allow for faster, more accurate follow-up shots. You can argue your follow-up shots are fast and accurate enough and I wouldn’t disagree. However, this is a review and the KE Arms Carry Comp should be praised for being an effective system. 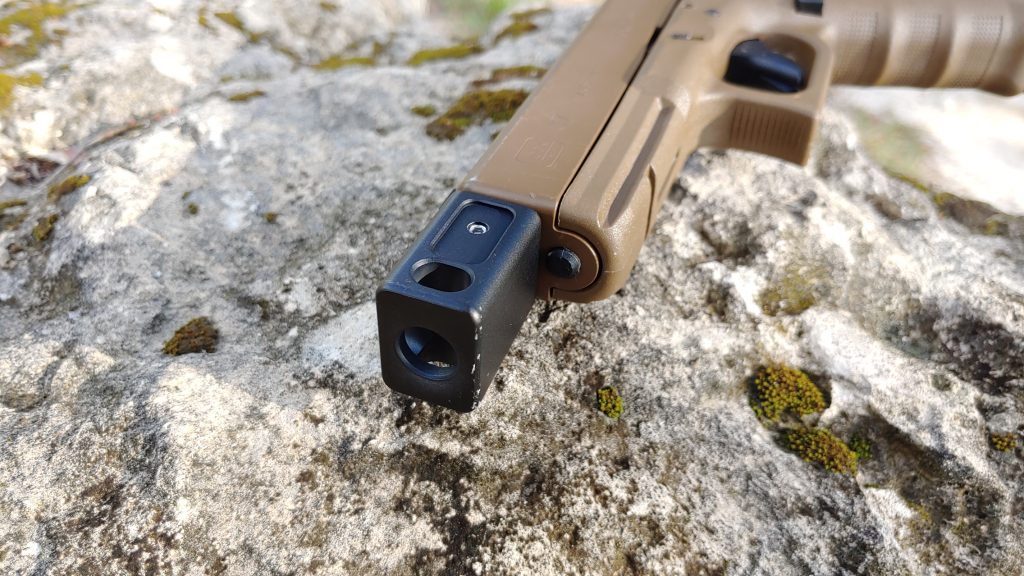 A full-sized 9mm isn’t hard to handle so imagine how much easier it is to handle with the Carry Comp. One of the biggest improvements I saw in using the Carry Comp was my one-handed engagements. The Carry Comp makes it much easier to shoot a gun with a single hand, be it the strong side, or off-hand. The reduction in muzzle rise and recoil make one-handed shooting feel nearly as comfortable as two-handed uncomped shooting. I suck with one hand shooting and any extra advantage offered is worth taking.

The subject of muzzle flash will always come up with comped guns. Yes, there is more, and depending on the caliber there can be a lot more. With a 9mm the extra flash won’t kill your night vision or blind you, and if you are pulling the trigger you already have a light on your target anyway. The low light level flash is increased, but it’s not like shooting a comped magnum revolver. 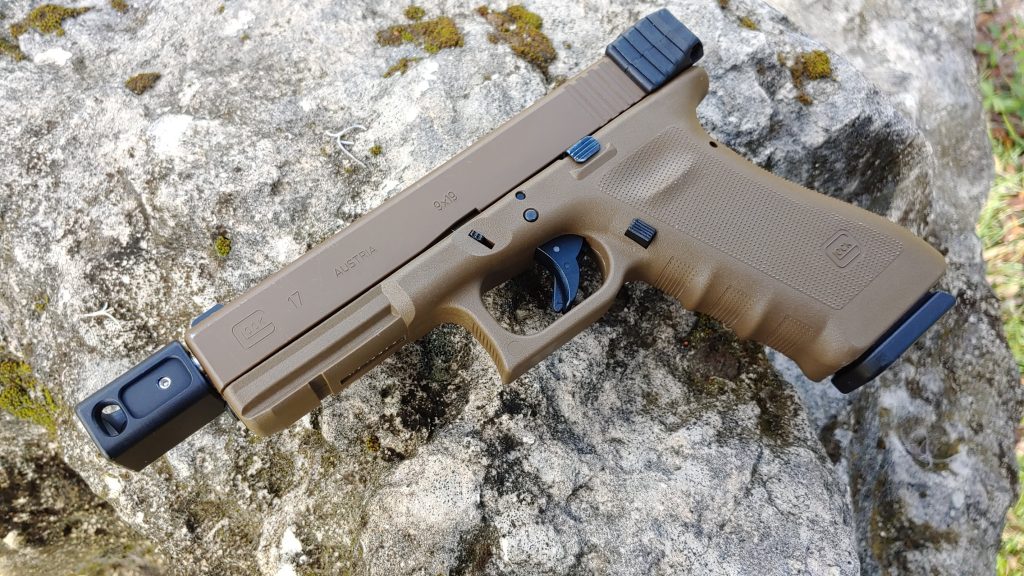 The main concern I have was pointed out by Dave Merrill at Recoil. He made an excellent point that comps can cause pain or discomfort when fired from a close retention position. The Carry Comp will throw a lot of gas at you when you hug the gun close to your body. This makes positioning your off-hand between your face and your gun even more important.

Comped guns can be ammo picky. A comp can cause a loss of reliability with low powered ammo. For 9mm that’s most 115-grain FMJ loads. Sometimes you have to adjust the recoil spring weight and do some other magic to make it work. KE Arms openly admits this on the Carry Comp page. It’s a classy move from a reputable company. 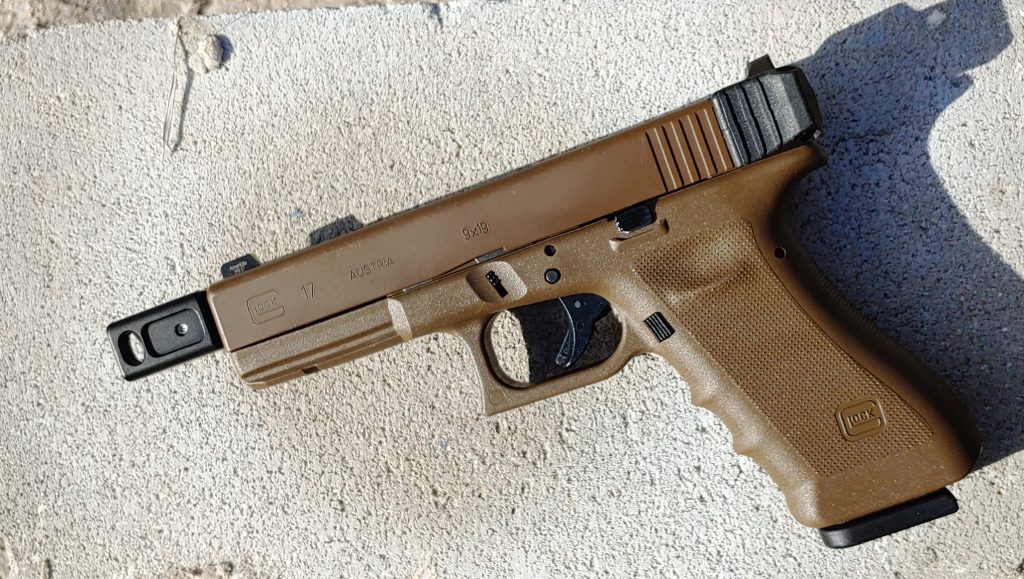 That all being said this wasn’t an issue with my Gen 3 Glock 17. It cycles everything from Tulammo 115 grain steel cased crap to 147 grain Atlanta Arms precision ammo. This may vary between different guns but on this Glock, the KE Arms Carry Comp had no effect on reliability.

The KE Arms Carry Comp is a small addition overall to your gun. Most mounted white lights are way bigger and much heavier than this little fella. This little block of metal adds on a ton of controllability to your weapon and the juice is worth the squeeze both size and bulk wise as well as cost-wise. Check ‘em out, it’s an affordable upgrade to make for carrying, for competition, or just for fun.