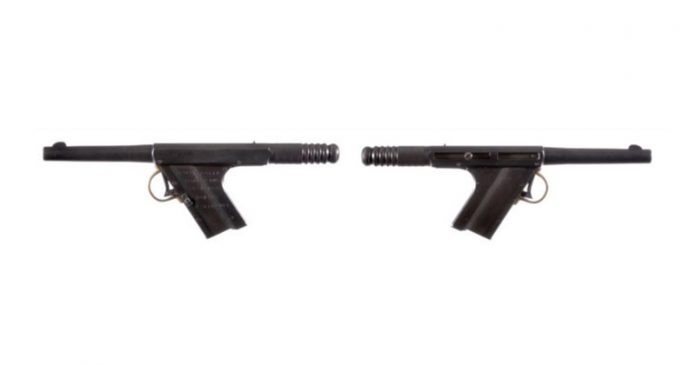 This seriously interesting handgun, which looks like something right out of a 1930s Buck Rogers or Flash Gordon serial, is likely a one of a kind pistol from a Renaissance man.Rock Island has it up for auction this week (estimated price $100-$200) and you will probably not find another like it. Crafted by one Mr. P. P. Belt of Fredonia, Kansas, it is a .22 LR semi-auto that accepts Colt Woodsman magazines — why reinvent the wheel on the latter, right? The barrel is 5.5-inches long and the rimfire action is contained in the rear of the receiver. The cocking handle is on the right-hand side. The piece has wood grips, a large bladed front sight, and rear notch. The flat trigger profile and low bore axis would surely be a hit today.

Belt seemed like an interesting fellow in a Tom Swift kind of way. The Biographical Record of Jasper County, Missouri describes him as a jeweler and machinist in Fredonia (current pop just over 2,000.) He is listed on the Worldwide Registry of Auto Manufacturers as having made his own car around 1904-1907. Popular Aviation in 1930 covered the “garageman” because he made his own airplane with a recycled Ford Model T engine. His shop, powered by propane for “pennies a day” was considered interesting enough of its own account to earn separate mention at least twice in machinist and blacksmithing journals.

We wouldn’t be surprised if a 1930s dirigible journal also noted Belt with his own zeppelin design that he used to fight off hordes of flying robots backed by foreign parties unknown. Maybe that one just hasn’t been digitized, yet.