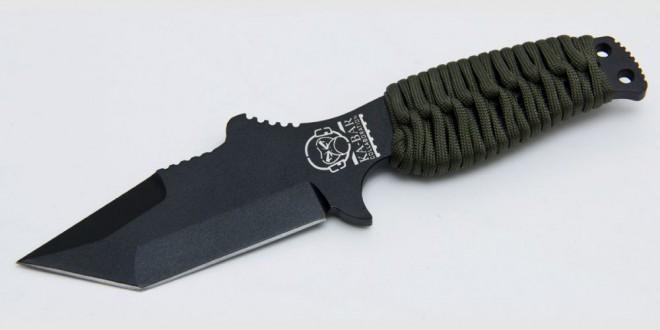 Mil-Spec Monkey who has been a long time supporter of us here at 248 Shooter has a new release on the market. Actually it’s not a new release as it is not officially released it is more of a pre-release.

Mil-Spec Monkey has teamed up with one of the top names in defensive knives KA-Bar to release the “KA-BAR MSM KNIFE 001”.

This knife has one purpose and it is a purpose far too many knives never get to enjoy. It is made to be used and abused. This is not a safe queen work of art. This knife was a culmination of Monkeys years training and working with serious contractors. The purpose was to design a no frills affordable knife that could stand up to an active duty and all that comes with it.

The knife can be used for just about anything you can think of. The handle can be used for smashing glass. Note that the knife does not have a special tip to do this but we did shatter auto glass with it as a test. I would advise using gloves.

The point is sharp enough and angled to be used for stabbing but due to the design is legal in single-edged states (It may not fit length of blade limitations and each state and city varies in knife rules. Check your local city for other laws that may make this knife illegal in your area).

the knife comes with all you need to get going. Supplied short Malice clips are designed to easily attach to a belt for EDC or can be attached to PALS and MOLLE webbing for tactical use. The strong well fitted polymer sheath will allow you to carry the knife either blade up or down with no fear of it falling out.

The classic styled 550 Paracord wrapped handle is great for use in many situations. Wet, bloody or oily hands can handle this Paracord easily allowing for a non slip surface. If you are a connoisseur of Paracord and prefer less traditional wraps then simply cut off the existing wrap and redo it as you see fit.

I have beat the living hell out of this knife over the last 4 months.  How did we beat it up lets count the ways.
We started by getting it the day before the cub scouts annual campout. This is 3 day trip with about 80 scouts. I had 3 different kids need to borrow it since they forgot a knife to earn a whittling chip. If you have ever seen these kids whittle it is more like taking out gouges than nice clean strokes. Needless to say that the blade on my Kershaw came back nicked. The KA-Bar MSM came back without a scratch.
As I am the grub master at events this knife was also heavily used in the kitchen. There is nothing that it was unable to open including a large sauce can that we forgot a can opener for.

The knife has been on my belt or on my gear when training since the day I got it. From opening packages to prying open various containers this thing is a beast.
While it is heavier than a typical blade the weight is well-distributed on the belt.
The only gripe I had with it is that the Malice clips it come with only allow for vertical mounting. I wanted to mount it horizontally on my belt and on my chest rig. I was able to fix the chest rig issue with a simple bit of Paracord. I was also able to run it horizontal on my SPLIT Minus gear by Blue Force.  Drilling new holes in the Malice clips would have fixed the issue but as we may give this away or have to send it back to MSM at some point we didn’t take the liberty of doing that.
The handle fits well in my larger hands and even Ms. Shooter had no issue holding it in her midget hands. Though she did complain about the weight. The aggressive thumb ramp allows for multiple grips and applications.

Who is This For?

I can see LEO and Contractors who want a rugged every day carry fixed blade at their disposal wanting this. If I could really only carry one knife in the woods this would be my choice. It is rugged well-built and solid to the core. The blade is sharp and easily maintained.

While it is not a pocket knife and never meant to be it is not too big to carry on a regular basis. So for those bearded manly men who really want to flaunt some cold hard steel this is a winner. Its single edge and short blade length should allow you to carry it in most municipalities.

For the price tag of only $55 with everything you need included you will be hard pressed to find a better value in an EDC fixed blade.

Purchase one for on $55 at Tactical Sh#t