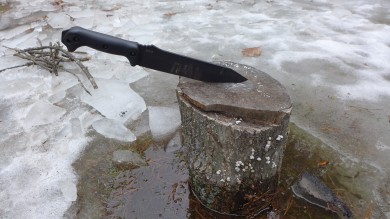 There are few in the gear world with as devoted a following as Ethan Becker. His designs have gone from company to company more than once, and each time the Becker faithful (known as Beckerheads on knife forums), have followed him. He is the closest thing there is in the gear world to a sage, with a breadth and depth of knowledge that is amazing. But all of this is based on the simplest of tools–a Becker fixed blade. His designs are simple for the same reason that river rocks all have the same shape–they are crafted over time and polished to perfection. The Becker Necker is a great small fixed blade, but this review focuses on one of his two big choppers, the BK9 (the Machax is the other), currently being produced by Ka-Bar Knives.

The BK9 is a large fixed blade knife. The blade is 9 1/4 inch long and 3/16 inch thick, and is made of high carbon 1095 Cro Van steel. It has a thick black powder coat, and comes with a simple nylon sheath with a plastic insert and two different belt loops. The handles are sculpted with a pronounced parrot’s beak (the down turned rear portion of the handle) seen here:

The knife has a run of jimping along a pronounced thumb ramp. The knife is a full tang design, and the steel protrudes from the rear of the handle allowing for use as an impact tool. The blade is a clip point blade with a clip smaller than that found on a bowie pattern.

I have had this knife for a while in that time I have used it for brush clearing, fire prep, general camp chores and well as for processing large amounts of firewood. There is, and probably always a will be, a debate raging over the utility of big choppers. Frankly, that’s like being forced to pick between bacon versus beef jerky–a pain and an unnecessary choice, regardless of the winner. I have a maul and it splits wood much better. I also have a machete and it clears brush much better. But the chopper can do a little bit of both and I used it that way. As spring came in New England, the area behind my fence became a thicket quickly, and while the machete is much less work for clearing greenery, it doesn’t work quite as well on tougher growth. Plus, there is nothing as viscerally satisfying as chopping down a small tree in a single swing…well, nothing that you can do outside with your clothes on, at least. I used the BK9 to make a few dozen feathersticks and while it worked it was vastly overbuilt for the task (the Freeman Outdoor Gear 451 handled this task MUCH better). I also did a good deal of batonning because, well, that’s just the accepted form of testing a chopper, even if it is a bit (or a lot) impractical when a maul is around.

The form of the BK9 is simply wonderful, perhaps the Platonic idea of big chopper. The blade shape is excellent, pushing balance point of the blade towards the belly at the tip, which is great for chopping. But as good as the blade shape is, the handle is where the BK9 (and all of the Becker designs) really ups the ante. The handle is amazing, truly the best fixed blade handle I have used.

Its shape is great with the hook at the end allowing you to really swing the blade. The palm swell is nice as well, but it is the full convex shape that really makes the BK9 a superior fixed blade. The sheath is, well, a production fixed blade sheath, which is to say, meh. The Freeman 451 is really an exception, as most production fixed blades have terrible sock-like sheathes. This is better than the no-retention design that I had on the Ontario RD-7 I owned. Really its not too bad, but I would definitely budget in a replacement sheath if you plan on building an outdoor system around the BK9.

The choice of steels is fine, especially given the intended use. I like the Zytel handles, though I know that many would prefer micarta. There are a wide variety of aftermarket upgrades for the Becker Ka-Bars, including micarta handle scales. For the price, the Zytel handles are great. I like the simple bolt construction of the handle as well, allowing for easy maintenance. I also like the coating which has held up quite well. I did a lot of chopping and it still looks okay and is still very functional. The sheath’s inner liner leaves something to be desire (that something being a true kydex sheath). I would and probably will fix this down the line.

This is, in my mind, the best big chopper under $100. I have reviewed quite a few choppers in the past year and this is clearly the best value. The Rock Schempp from Spyderco is better at chopping thanks to is amazingly aggressive, almost khukri blade shape. The Cold Steel Recon Scout is probably tougher. But both are more money and neither have as good a handle as the BK9. You simply can’t overstate how amazing that handle is. Ethan Becker has fans, and rightly so. His knives, as seen in the BK9, are simple, effective, and true working knives. This isn’t something that you keep on a shelf. You go outside and use it. Even if it means chopping would covered in ice (which is what I was doing when that picture was taken).

But it’s not just value here. Over time I have realized that choppers with blades longer than 9 inches are hard to use (or hard on you to use). Under seven inches and you aren’t really working with a chopper. 9 inch blades are, for me, the sweet spot. Perfect dimension #1. Then there is the second dimension the BK9 gets right–thickness. An eighth of an inch is not quite stout enough for me. It is, well, uninspiring. I don’t feel I can really thump on the knife. But a 1/4 inch or more is just too much. The Recon Scout got stuck too many times. Again, the BK9 is in the sweet spot at 3/16″.

All of this adds up to a must buy knife. If you are just starting down the chopper road, get the BK9. I have tried more than a few and price blind it would still win out (though it would be a close race with the Rock Schempp). When you factor in cost though, its not even close.