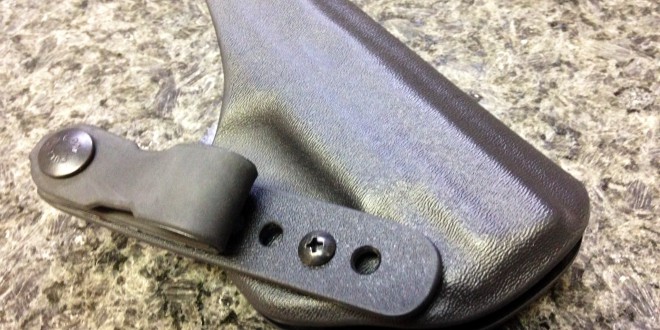 This is now the third attempt I have made to appendix carry. I am still not sold on this method of carry, what I am sold on though is this ingenious holster made by K Rounds. You may remember K Rounds from our previous review of the In-N-Out Holster. We have spent another 30 days rigorously testing their IWB KYDEX Appendix Holster.

I know your thinking really yet another Kydex holster? We cover kydex holsters often due to our readers interest in EDC and concealed carry. In a recent survey of our fans, both on Facebook and via the email list, we had an overwhelming interest in EDC and concealed carry. The secret to actually carrying every day is a simple one, comfort. If you’re not comfortable or named John Rambo then you’re likely to not carry, or only carry sometimes.

Comfort breaks down into two sub categories. The feel of the gun on your person, does it pinch or wear on you, will it fit IWB, can you bend and move without limiting your range of motion? Body weight, type of clothing typically worn, and placement of the gun on your body will be major deciding factors in picking the right holster for you.

While some people swear by appendix carry for me it is the least comfortable form of carry. I spend a lot of time sitting or driving and that is one of the reasons appendix carry is not for me. My tests while out and about standing for the day have proven to be much more comfortable carrying appendix. This K Rounds holster however is the most comfortable appendix carry rig I have tried yet.

One of the main reasons for this is the full range of motion that is available due to a unique design. The 1.75 inch belt loop pull the dot style fastener is connected to a kydex bar with 5 pre drilled holes. These holes on the bar allow you to adjust how high or low the gun runs in relation to your belt. Useful for those of us who wear skinny jeans (not me) all the way up to baggy pants (still not me) my tru-spec pants fell in the middle here.

The 2 points of swing that are created by this configuration allow for the gun to move freely to conform to sitting and standing while still maintaining a very safe retention on the firearm. As you sit the firearm will move away from the leg allowing you one less pressure point. When you stand back up again the pivot is designed to straighten the gun vertically back into place. This dual pivoting motion really makes the gun about as comfortable as you can get in appendix carry.

Is it Secret is it Safe

A wise old wizard once asked a silly young hobbit “Is it secret, is it safe”. I find myself asking this through the day. While I prefer OPSEC when it comes to carry I usually am not really worried about a bit of printing. My wife on the other hand worries what the liberal PTA moms in the neighborhood may think. She is constantly on my ass if there is even a small amount of printing that the average person would not ever notice. This makes the secrecy of my gun a major comfort point.

Because of the ability to adjust the ride height on this holster as well as the pivoting mounting system I have found this holster to be one of the easiest to conceal as an appendix rig. I have already mentioned though that appendix is not my cup of tea. I switched this gun to the 3 and 5 o’clock positions most of the time and was very pleasantly surprised.

Because of the pivot system I was able to cant the gun at 5 o’clock for an optimum draw and set it as a straight  drop at 3 o’clock. Now regardless of sitting or standing and the cut of my clothes I could transition from appendix to 3 and 5 o’clock without having to use a screwdriver and adjust the holster. I have been able to conceal using this holster in all but my absolute tightest of shirts with no printing.

Ok so I am using a p938 hardly the largest of guns and not a fair comparison to my G19/26L that I often use. However even when trying this compared to my other p938 holsters I have seen a drastic improvement in how this gun conceals inside the K Rounds IWB appendix holster.

The double sweat guard is a nice touch to help protect the gun. The sweat guard against your body stops any sights or slide texturing from irritating your skin. It also protects the finish of the gun from destruction by body sweat. The guard against your pants stops the slide from catching catching on your pants during a draw, as well as protecting the metal finish from buttons or clasps that may scratch the gun. A well thought out feature that adds little to no bulk.

I am not sure why K Rounds has not come up with some cool new patent pending name for this cause frankly its ingenious. I have several gun buddies that refuse to even consider appendix carry. They are bean poles and don’t have the issues I do with carrying that way. The reason they refuse to do it is because they are afraid to shoot off their junk.  This is a highly illogical fear imho if your worried about shooting your junk you should be worried about carrying in any holster and probably should not carry a weapon in the first place.

There is 2 arguments I have heard that have any rational basis. The first is the person scared about holstering or unholstering with belts, shirt buttons, or zippers that may be more prominent on the front of your clothing.  The second is those with a larger belly that do not like having to blind tuck a weapon in up under the dunlap (when a belly has dun lapped over the pants).

K rounds has taken your excuse away with this nifty system. Earlier we described the way the mounting system allows for full range of movement in the waistband while keeping the weapon secure. What this configuration also does is allow you to pull the holster completely out of your pants while still connected to the buckle so you can holster then re-tuck.

With this brilliant configuration you will never need to push a gun into your pants without the trigger being completely covered. The chance of an AD or ND is brought to virtually zero regardless of straps buckles or zippers. Check out how it works in the video below.