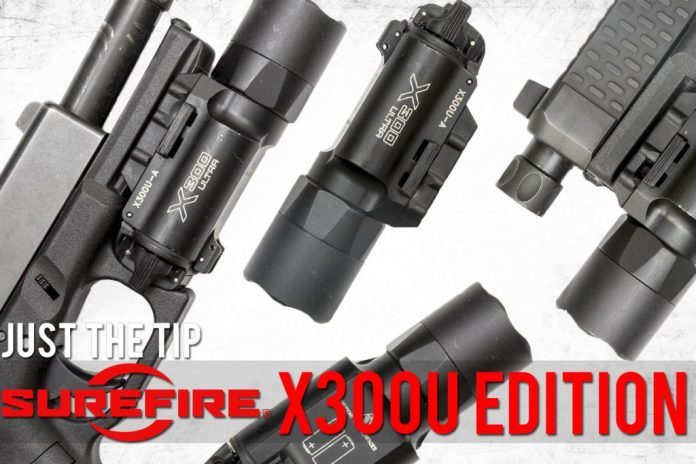 The Surefire X300U is a popular weaponlight, and almost certainly accounts for the bulk of Surefire’s pistol WML sales. While there is still a small following for the older, not-as-bright X300, the 500 lumen X300U-A is the one I see the most. However, the latest 600 lumen X300U-B making inroads, albeit with disquiet for some (more on that in a minute). So in no particular order we’ll begin.

Fitting
The X300U-A is fairly universal with pistols, but as with all such “universals” you can run into issues. Some handguns, such as the Hk P30 and Sig P226, have difficulty seating an X300U-A. The problem is that the battery door runs into the trigger guard before the locking mechanism is fully engaged. I’ve seen all sorts of fixes, from dremel tools to forcing the WML on by placing the bezel on a workbench and putting all your weight on it. The first is a bad idea for obvious reasons, and the second isn’t much better. Forcing the X300U on makes it damn hard to remove, and it compresses the O-ring in the battery door well beyond the original weather-sealing intention. In the case of these pistols, I recommend first removing the rear spacer from the battery door. That gives you a bit more room, as you can see below.

It can be kind of a pain in the ass, so I’ve made a video to show how it’s done:

If the light is particularly hard to install or remove on a rail, there are a couple things you can try. First, simply install and remove it several times. You may also want to consider swapping out the locking mechanism. Only if all else fails (and even then I can’t really recommend it), adjust the tension by tightening or loosening the six screws on the rail adapter itself–but be damn sure to use some thread-locking compound or Vibratite if you do. And while you should be checking for walking screws during PMCS anyway, pay special attention to them. 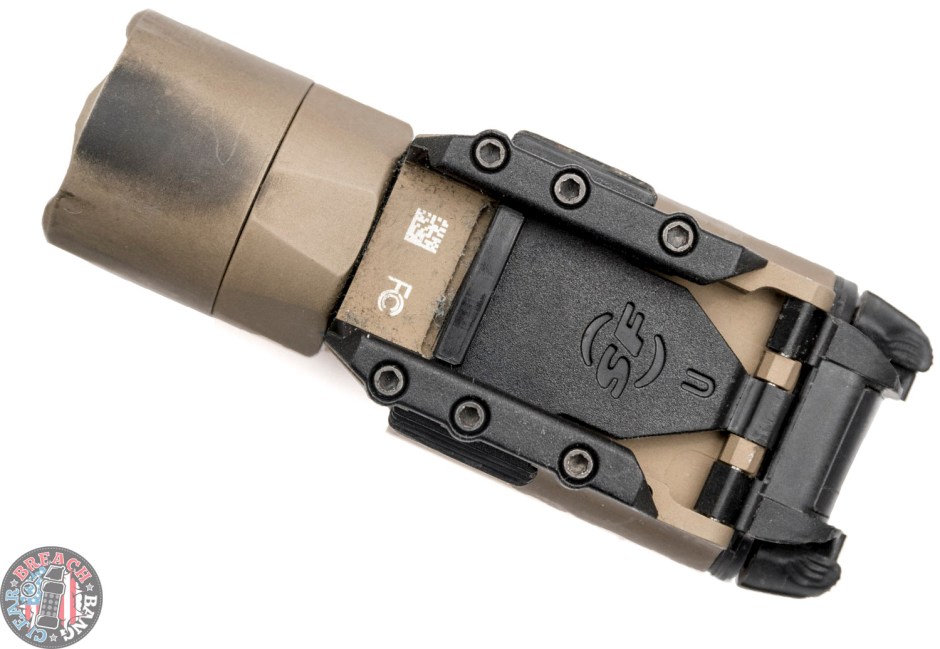 In case you can’t reach your controls:

For example, I have a Glock 17 equipped with an ALG 6 Second Mount, and due to the construction of the mount itself the activation switch on my Surefire is considerably lower and a bit further away. I also have famously small hands. So what to do? 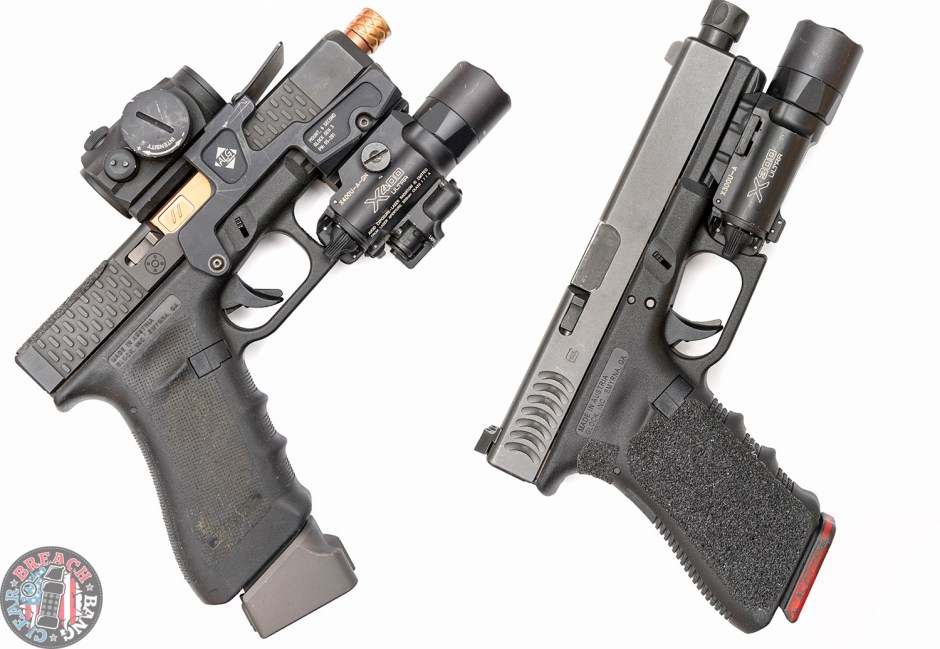 If you’re in a similar boat you may want to consider using a DG switch. These are weapon-specific battery door replacements that include a pressure pad. Surefire has DG switches for more than a dozen models on their site.

While they work well for one-handed manipulations, I’m personally not a huge fan. Seems like every time I see someone with one, their light is on as soon as they touch the gun. Maybe you’re into that sort of thing, or maybe you’ll have better control of it.

But there’s another way. This one I’ll attribute to Steve Fisher of Sentinel Concepts, as he’s the first one I heard mention it. Modify your switch with epoxy to make it slightly longer. For this I grabbed some JB Weld ‘Steel Stick’ and an old battery door to experiment with. 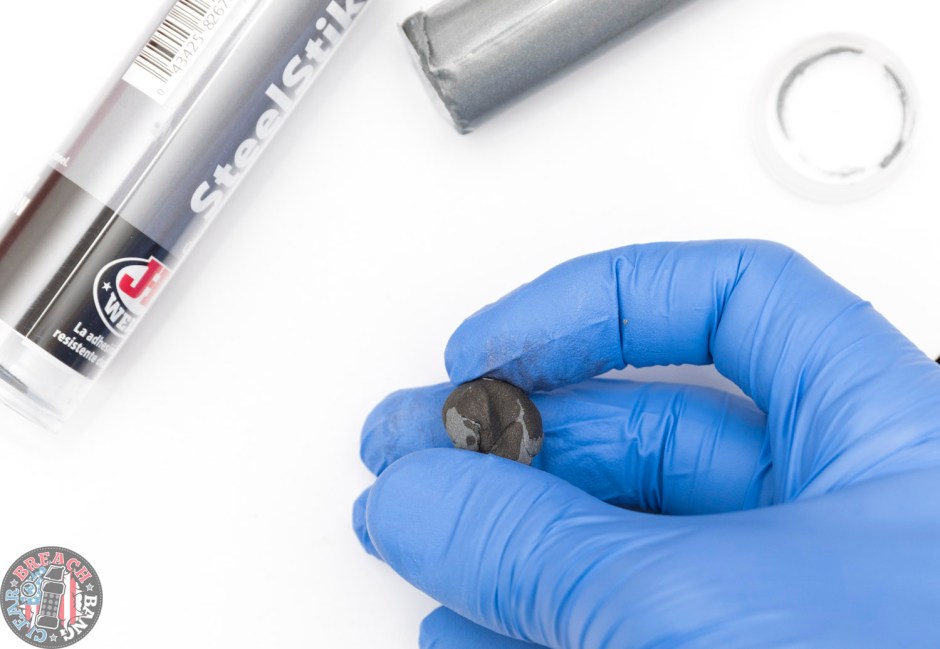 Add a little at a time, ensuring you don’t impede the function of your switch. Allow each base to cure before adding another. 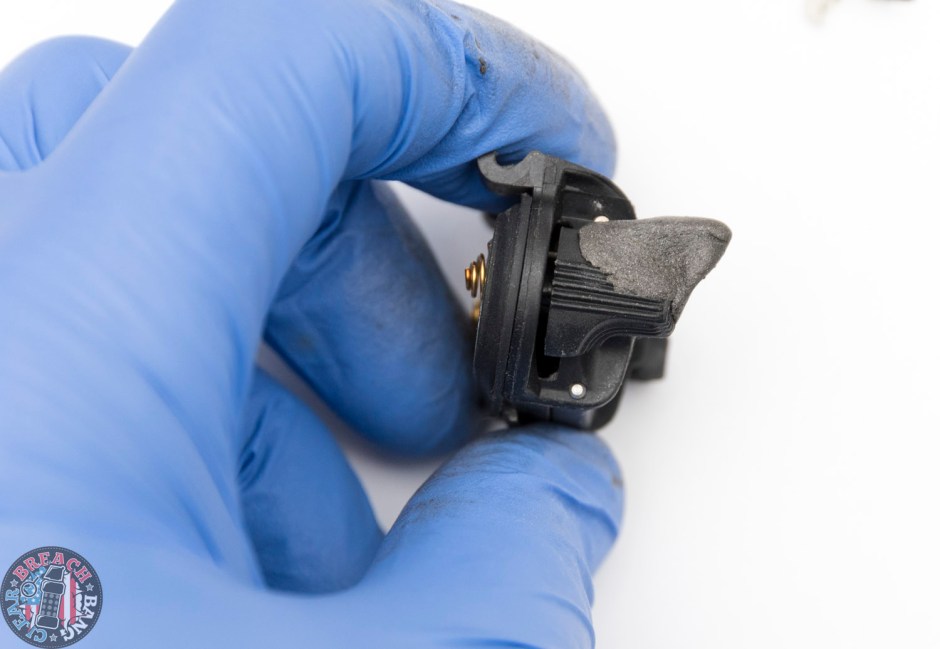 Since I’m modding for the 6 Second pistol, I’m also raising the extension a bit. 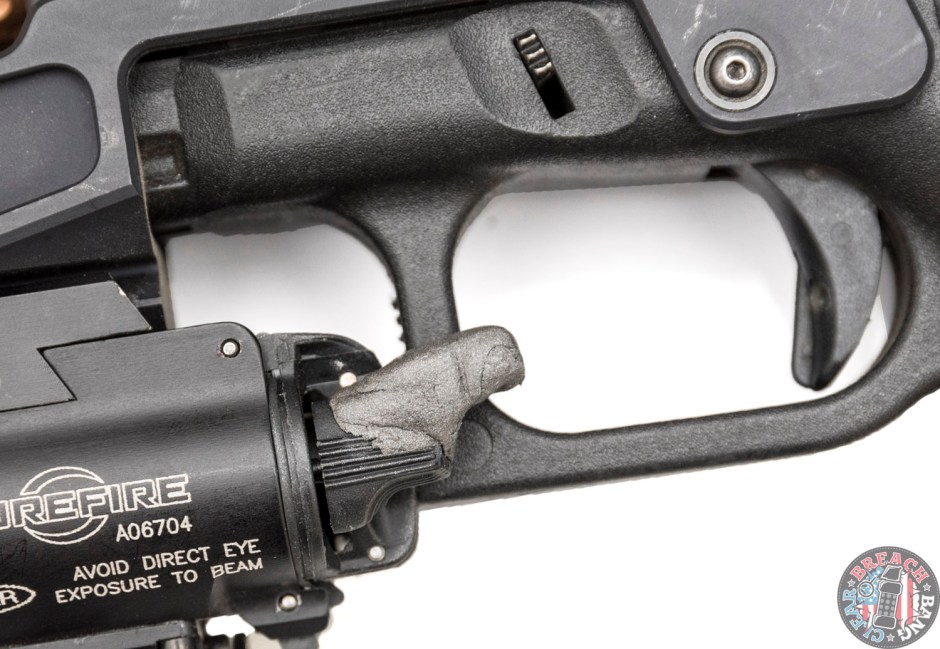 I like the JB Weld Steel Stick because it has a decent working time and can be filed and painted once fully cured. The finished product: 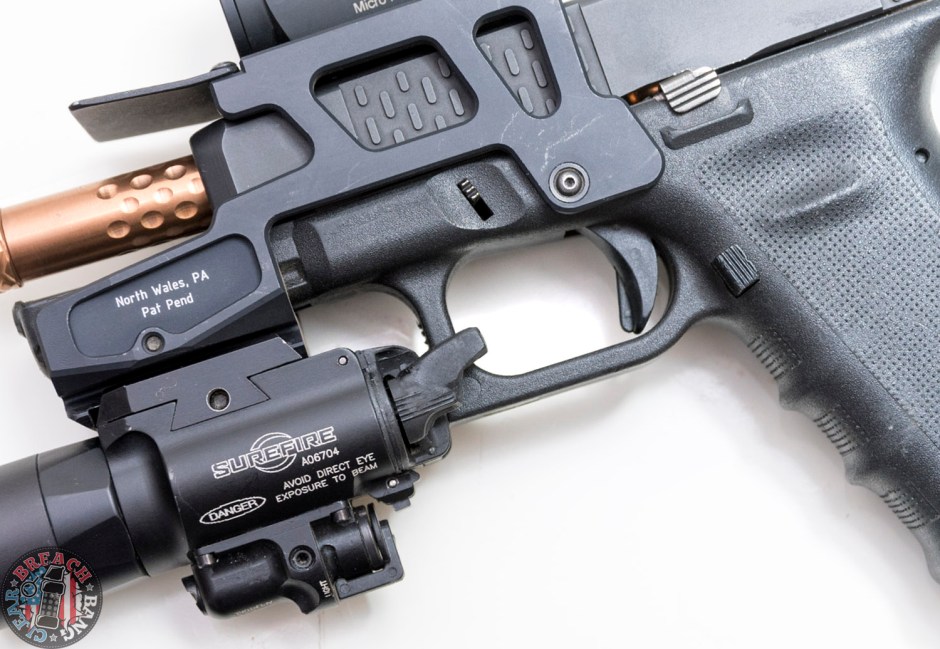 Points of Failure
Surefire makes a robust flashlight, but there still are common points of failure. 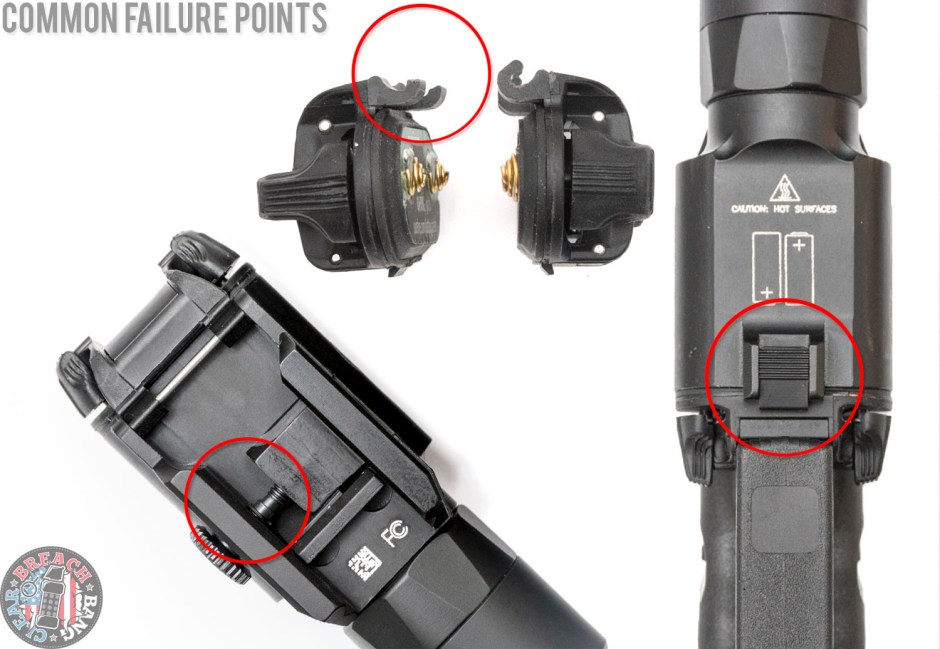 Latch failures are more common when the included cotter pin isn’t used. The door is easier to break when detached or while detaching it if done improperly. The screw-type attachment of the X300U-B is the main point of contention in the ‘A vs B’ argument. If you Mongo the screw with a BFS you can break it in the process, and sometimes if it’s overtightened it can also break under recoil [*cough* John *cough*]. Don’t go bananas on it, and use Vibratite or similar. When rifle mounted the rate of breakage across the board seems higher. 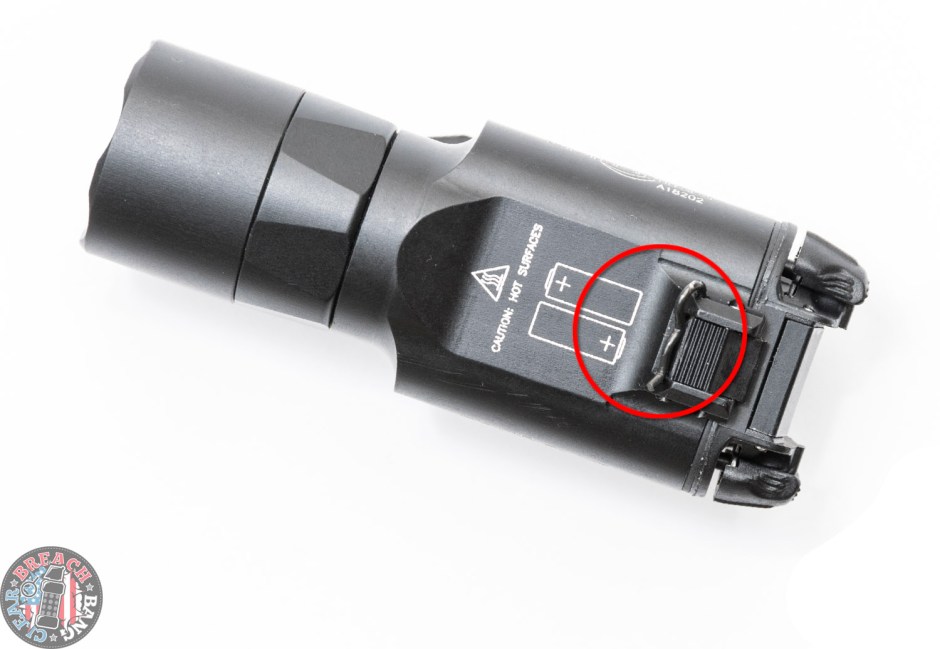 The good news is that Surefire has excellent customer service. Break any of the above and they’ll get out replacements to you. Also, just because it’s broken doesn’t mean that it won’t at least be functional. In the case of the broken battery door hinges pictured above, the door could still be locked in place (though it couldn’t be retained when the door was open).

Lens Cleaning
Everyone has their special sauce for this. As with many things, an ounce of prevention can be worth a pound of cure. Some guys swear Chapstick, others by Cat Crap (which is an actual name of an anti-fog paste). And even though I’ve never heard of anyone actually using the stuff, at least one company is making “Tactical Light Conditioner“. But all is not lost even if you don’t regularly goo up your WML. A pencil eraser can work wonders. Recently I used poster putty. And while the light didn’t come out perfect right away, there was some marked improvement after about five seconds. All of the carbon and grit stuck to the putty itself. 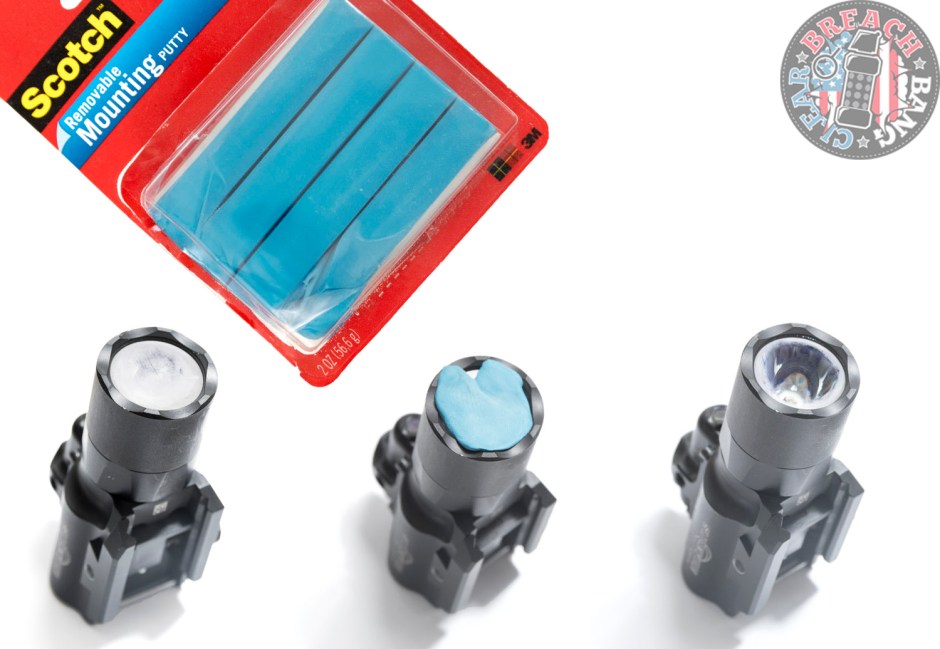 Comparison of A versus B Models
As mentioned above, the screw mounting of the B model gives some people pause. To be sure, there have been some breakages reported though I haven’t had any issues. Don’t be Mongo. However, the X300U-B can be easier to mount and remove, and this is especially true if rifle-mounting. The locking mechanism is similar to, but not exactly like, the mounting system that’s been on the X400 models for several years. Though there weren’t nearly as many breakage reports, given the increased cost of the X400 models there also aren’t as many out there in the wild. 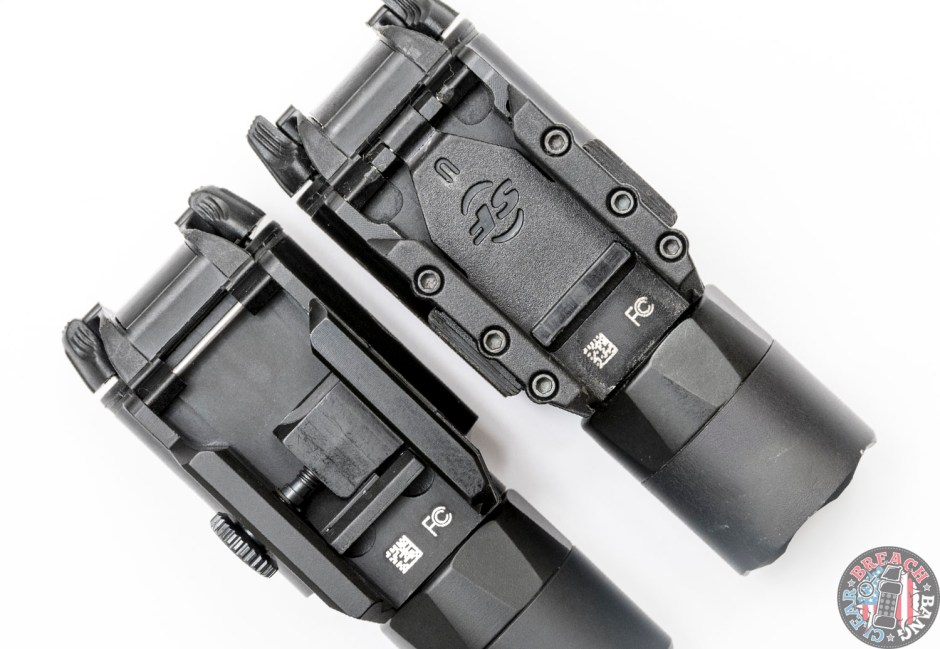 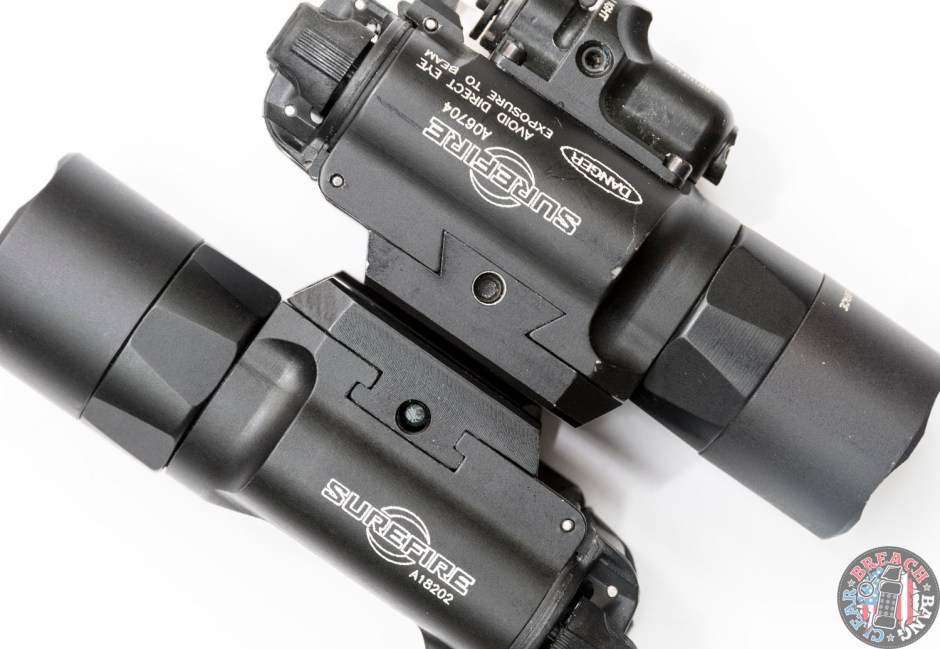 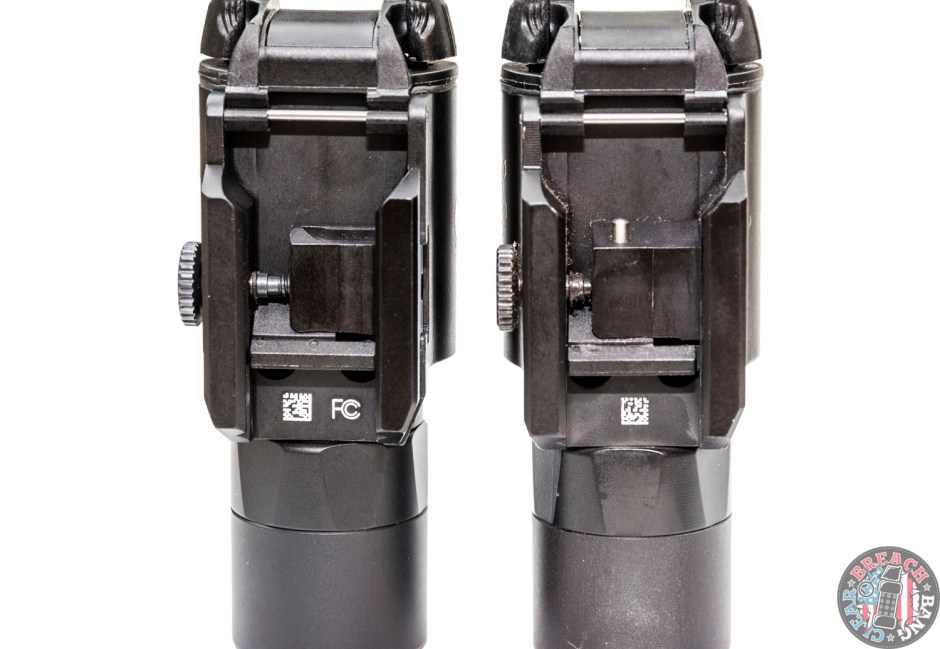 Of course the main advantage of the X300U-B over the X300U-A are the lumens. The B model sports 600 compared to the 500 of the A model. What does that look like? Here are some beamshots for comparison: 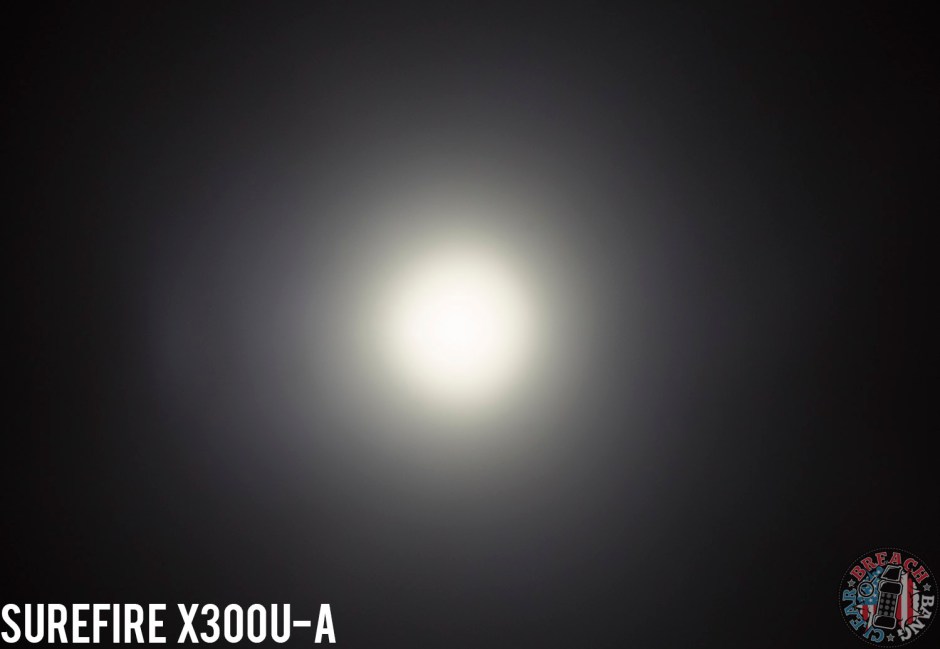 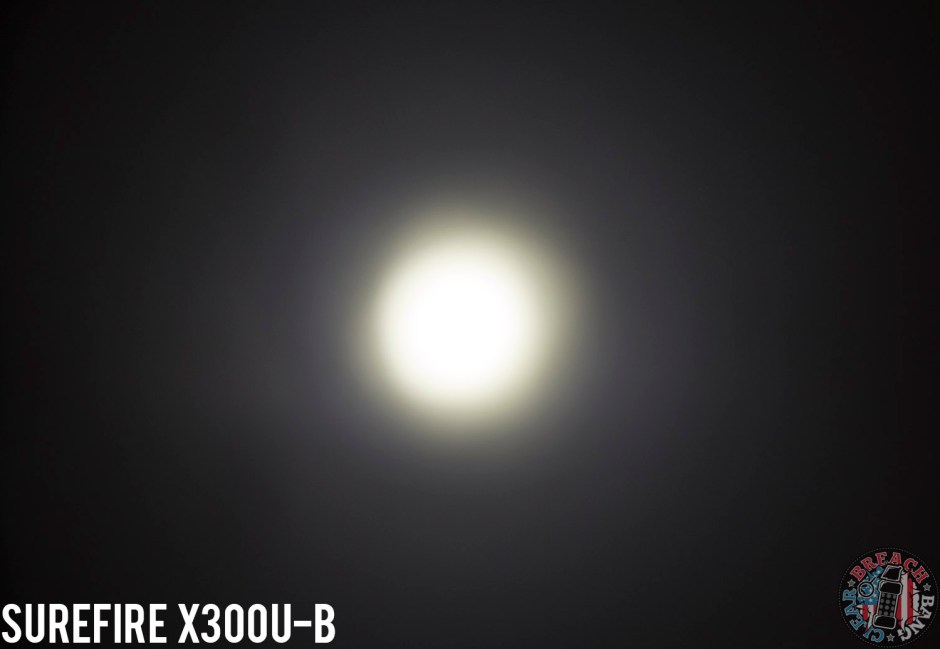 You can see there’s a bit more of a hotspot with the B model and you get a bit more range. Here they are in an animated gif:

Between the two, I’ll continue buying the B models because I like the increased output and corresponding beam pattern, though I wouldn’t pass by an X300U-A on sale.

Conclusions and Loose Rounds
You may have noted either from the photos or your own lights that there are two marginally different battery doors. One has wider but shorter levers and the other slightly longer but skinnier levers. The X300U-B models are shipping with the fatter levers . They function exactly the same and are interchangeable; just thought it was worth mentioning. A related piece of news is that Overready, in conjunction with TorchLAB, is now performing their 3,500 lumen upgrade on X300U’s. This was previously only available with the older X300’s. If you’re into lumens, well…. the only thing stopping you is probably the cost of conversion.