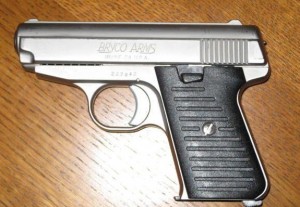 A gun sale 14 years ago to a mother looking for protection but ended up with an accidental death instead has a Georgia pawnshop owner facing a huge financial liability.

According to the Atlanta Journal Constitution, a jury has handed down a $7.4 million award against Macon pawnshop owner Ronald Richardson after he sold a .380 Bryco/Jennings pistol that was later involved in an accidental death of the gun owner’s brother. The buyer, Tiffany Hardware, 21, had purchased the gun new in 2000 from Richardson for $89 to be used for self-defense. After having problems with the firearm jamming, she brought it back to Richardson who could not clear the loaded weapon and gave it back to her without a magazine but with a round still in the chamber with instructions to bring it to the shop when his gunsmith was there.

However before she could make it back to the store, Hardware dropped the gun accidentally on a glass dining room table and it fired, striking her 14-year old brother who later died from the wound.

At the conclusion of the week-long hearing, a jury awarded Linda Bullard, the teen’s mother, a $6 million judgment along with $1.4 million in interest.

Bullard also received a $2 million judgment against Bryco Arms. However, Bryco long ago folded after a California Superior Court entered a judgment of $24 million against it in 2003 for a series of suits finding the pistol defective in design. Jimenez Firearms in 2004 bought the assets of the defunct company at auction and moved to Nevada after its guns failed California’s firearms safety testing process.

“One of points that impacted the jury was the owner, Mr. Richardson, testified that the gun he sold to 21-year-old Tiffany was one he would never recommend to one of his family member,” Lloyd Bell, Bullard’s attorney told the Journal Constitution.

The judge in the case has ordered both sides to negotiate a final settlement.