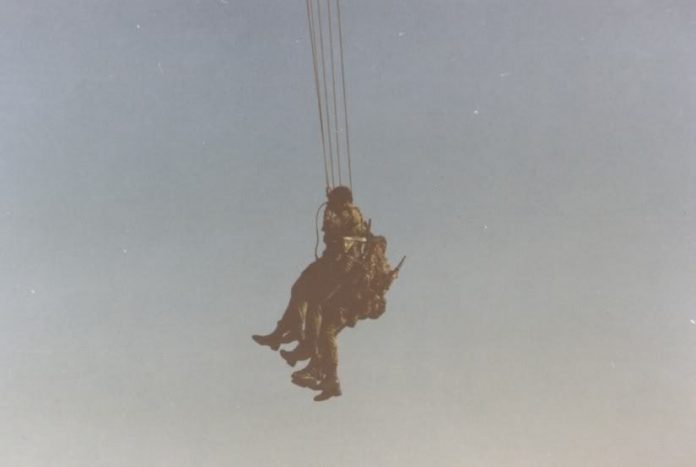 Editors note: MACV-SOG was organized and functioned as the first true joint special operations task force (JSOTF). Formed during the Vietnam War, the unit conducted special operations, to include providing intelligence, psychological operations, and personnel recovery, in support of the theater campaign plan.

Today marks the 55th anniversary of the activation of the Military Assistance Command, Vietnam, Studies and Observations Group (MACV-SOG) in the Republic of Vietnam. MACV-SOG was organized and functioned as the first true joint special operations task force (JSOTF). Formed during the Vietnam War, the unit conducted special operations, to include providing intelligence, psychological operations, and personnel recovery, in support of the theater campaign plan.

From John’s book Across The Fence: The Secret War In Vietnam, here’s an excerpt on what I carried for weapons/firepower:

The most important piece of equipment we carried was the CAR-15. The sling for it would vary: sometimes I used a cravat or a canvas strap taped tightly to both ends of the weapon for soundless movements. That was the preferred weapon of choice by everyone on ST Idaho. The only exception was an AK-47 for Son when he was our point man wearing an NVA uniform, and an M-79 carried by our grenadier. In November 1968, Henry King carried the experimental pump M-79 weapon on one mission. It held up to five rounds of 40 mm high explosive ammunition. His secondary weapon was the Model 1911 Colt .45. On occasions, Black would carry the M-60 machine gun.

Every American on ST Idaho carried a sawed-off M-79 for additional firepower. We thought of it as our hand-held artillery. During a patrol, the Americans would load a special M-79 round with flechettes or double-ought (00) buckshot for close contact. The sawed-off M-79 would be secured either with a canvas or rope lanyard or a D-ring that was covered with black electrical tape to prevent any metallic banging. During the fall of 1968, I had a one-of-a-kind sawed-off M-79 holster, which I lost it when I was unconscious after a rope extraction in Laos.

I would carry at least thirty-four 20-round magazines for the CAR-15 – we only placed 18 rounds in each magazine, which gave me 612 rounds for that weapon, and at least 12 rounds for the M-79. The CAR-15 magazines were placed in ammo pouches or cloth canteen pouches, with the bottoms facing up to prevent debris from getting into the magazine and all of the rounds pointing away from the body. We taped black electrical tape to the bottom of each magazine to make it easier to grab them out of the pouch during firefights. I also carried 10 to 12 fragmentation grenades, a few of the older M-26, the newer M-33 “baseball” grenades and one or two V-22 mini-grenades.