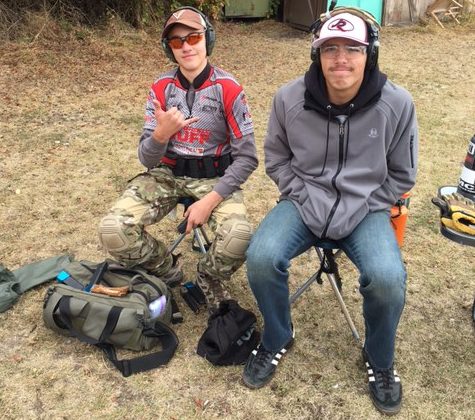 A couple of weeks ago I brought my friend Anthony out to a local USPSA/Steel Challenge Match to introduce him to the shooting sports. The day was all about showing him what the shooting sports was and how he can be involved. It was a really good match, especially as a first match to bring a new shooter to. It’s a solid group of people who make up a good culture for him to be introduced in. There was also a fun shoot after the match that he enjoyed. (I mean who doesn’t like a Burn Down race to see who can shoot a 2×4 in half the fastest…. And then everyone just mag dumping to make splintered wood?) All things considered I’d say it was a pretty good day of shooting. Let me preface this by saying the dude I brought out is my best friend, so it was pretty easy to get him there. Like me, he grew up around guns, the difference is I just focused in on them and made shooting a huge part of my life, and he went down a different path.

So over the last year or so I’ve been trying to get Anthony out to the range with me but scheduling between him and I hasn’t exactly been easy. So when we finally had the ability, I was ecstatic. Once we got there he was a nice guy and helped with Stage set up, which was completely unnecessary but helped give him an idea of what was to come. Once that was done and I was getting my belt on and mags loaded we went over some ground rules: keep your eyes and ears on, follow the basic firearms safety rules, don’t do dumb things, pay attention, and most importantly to have fun (I know that rule is cliche but whatever). 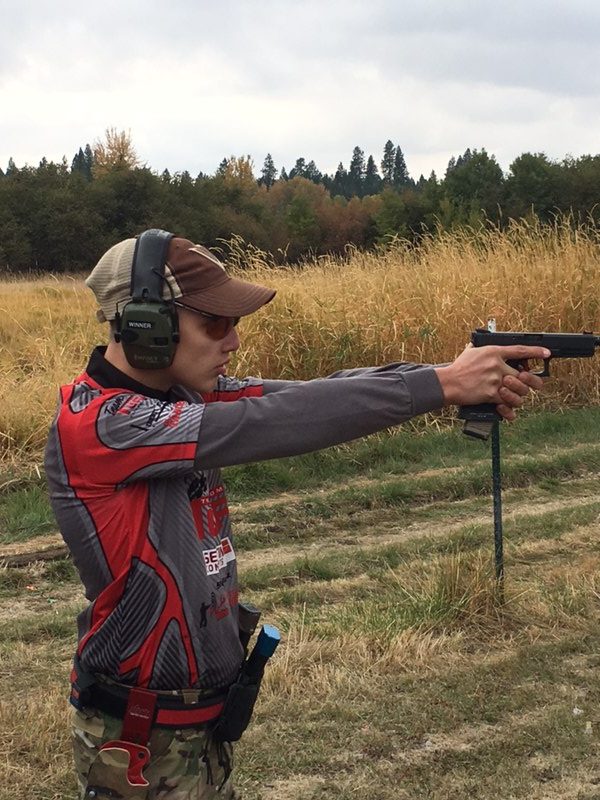 Till almost halfway through the day he didn’t even touch a gun. He just talked, asked questions and watched people gunning through the stages, which was impressive because that is a lot of self control if you ask me. Then while I was on the stage next door my dad took the bay we were just on and let Anthony shoot his Glock 19 (Roland Special) a bit, which was good because I felt his attention wandering off and his interest dwindling. I walked up after Anthony had just shot through the first magazine and was listening to he and my dad talk.  You could hear the excitement in his voice. I tossed Anthony a fresh magazine and said “Bro, I wanna see… Fire it up!” Dad gave Anthony the commands and he let it rip… He did a damned fine job of letting freedom ring on all that steel.

When the competition was a wrap and the Burn Down Race was over we began tearing stages down but kept one bay up for a bit for a fun shoot.  It was also a bay where folks could shoot each others guns, test out the hotness, etc. One of our friends called us over. On the table he had a PCC (pistol caliber carbine) and a 1911. I still had my Victory First/ Overwatch Precision Glock 17 on my hip and dad had his Roland Special.. I’m not going to describe every detail of the fun he had shooting everything, but I will say that it was awesome to see his eyes light up and a permanent smile set in as he continuously hit steel… ringing Liberty’s sweet Bell. 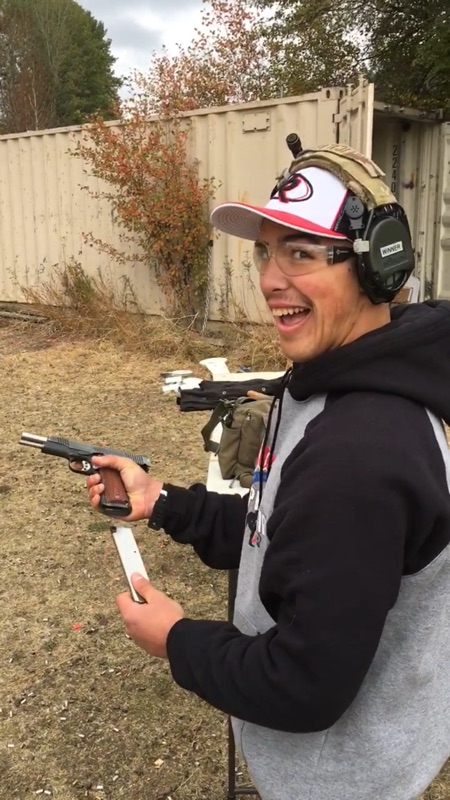 At the end of the day I’m just happy that he had a good time and that I could introduce someone new into the wonderful world of the shooting sports.

So what did Anthony think?

So when I asked my buddy what he thought of the day his initial response was “it was awesome!!” Seeing as this isn’t really an answer I asked him to elaborate. After reading the, honestly quite lengthy, paragraph that he sent me I think the biggest thing he took away from the weekend is that anyone can be involved in the shooting sports. He said he enjoyed the type of people that were on the range and how respectful and considerate they were towards each other, as well as the good sense of humor we carried.

He wrote “It was welcoming to young competitors, such as Jase, even though he’d been doing it for quite some time. I liked how even though he’s 15 everyone treated him with the same respect as the older shooters as an equal. There was no intentional talk down, and I admire that so much because competitive shooting is NOT something for any ‘kid’ to just show up and do. It does require training and knowing the ‘how to(s)’ but if you know how to shoot, you know how to be safe and the rules of proper gun handling and you carry yourself in an honorable manner, then it doesn’t matter your age”.

The Value of it all

Truthfully my trip to the range with Anthony was all about showing him a side of my life that takes up so much of my time.  He’d seen my videos, heard my stories and had an idea of what I did, but now he not only got to see it first hand but also experience it for himself… behind the trigger.  He’s an athlete by nature, so I am excited to get him on the range when local 3Gun starts up again in Spring. I think when he sees and feels Multigun for the first time the hooks will be sunk deep.  When that day comes, I’ll let my Dad give his parents the sales pitch! Lol

I did my part, I brought a new guy to the range, a new guy to a match and I got him interested. The more folks who are interested in Shooting Sports, not just target shooting or hunting, the better… Because at the end of the day we need more interest and more people that understand our passions as we move forward in our efforts to ensure our Liberties as gun owners remain free. I did my part, now will you do the same?