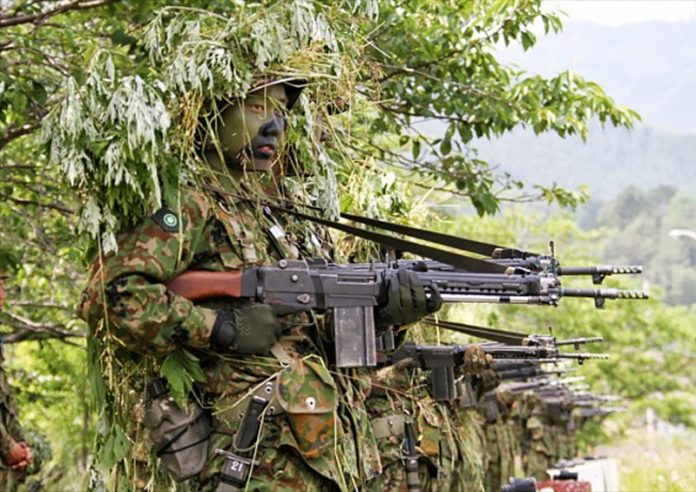 Since the introduction of the Murata, the first indigenously produced Japanese service rifle adopted in 1880 as the “Meiji Type 13 Murata,” the Japanese military has utilized a unique variety of domestically-made weapons. Unfortunately, the naming conventions have also led to confusion in many cases. In the case of the Type 13 Murata, it referred to the adoption date – the year 13 in the Meiji period according to the Japanese calendar. In the 20th century, the Japanese developed several small arms that were undoubtedly distinctive. Yet, due to questionable designs and later during World War II, to the use of subpar materials, Japanese small arms were primarily seen as inferior to their Western counterparts. It was only after the defeat of the Empire of Japan that its military finally adopted what could be seen as a rifle that rivaled contemporary designs of the era. That weapon was the Howa Type 64.

The Origin of the Japan Ground Self-Defense Force

Following the Second World War, the Japanese, as a defeated nation, were not allowed to maintain a large military presence. However, in 1954, with rising tensions in Europe and Asia during the Cold War, Japanese leaders began to consider the nation’s self-defense. The United States had served as occupiers after the war and as the island nation’s de facto protectors.

As more U.S. occupation troops were moved during the Korean War (1950-53), which left Japan virtually defenseless and vulnerable, the government in Tokyo sought to address Article 9 of the 1947 constitution. It had called upon the Japanese to forever renounce war as an instrument for settling international disputes. Still, it also declared that Japan would never again maintain “land, sea, or air forces or another war potential.” Key to this was the wording – as politicians and lawmakers will also find loopholes.

In July 1954, Japan’s National Security Board was reorganized as the “Defense Agency”. The National Security Force was transformed into the Japan Ground Self-Defense Force (JGSDF). It was a de facto post-war Japanese Army in everything but name. The Coastal Safety Force was also reorganized as the Japan Maritime Self-Defense Force (JMSDF), while the Japanese Air Self-Defense Force (JASDF) was established as a new branch of the JSDF. For the record, the Japanese military is now equipped with everything from F-35 fighters to heavy tanks. Fortunately for the United States, the island nation that was once among its greatest enemies is now among its closest allies in the Far East.

As Japan was nearly “demilitarized” following the Second World War, the small National Security Board and, later, the JGSDF had relied mainly on surplus American-made small arms. Infantry squads were larger equipped with the World War II-era American M1 Garand semi-automatic rifle. In a twist of irony, the weapon played no small role in bringing the defeat of the Empire of Japan.

However, by 1960, the weapon was showing its age. The United States military had recently adopted the M14 – the last battle rifle to be developed and produced at the Springfield Armory in Springfield, Mass. Yet, even by that time, Japan had been a nation of innovators, and it hadn’t shown any desire to adopt what was essentially an evolved M1 Garand.

Instead, Japan’s Defense Agency opted to produce a new domestically designed and manufactured primary battle rifle. Fortunately, the designers didn’t look at pre-war designs. Instead, under the direction of General Kenzo Iwashita, Howa Heavy Industries began the development of a gas-operated, selective-fire rifle chambered for the 7.62x51mm NATO round.

Howa, which was based in Kiyosu, Aichi, Japan, was a machinery manufacturer that was founded in 1907. It had produced everything from construction equipment to power tools to civilian and military firearms.

The rifle was accepted into service with the JSDF in 1964 as the Howa Type 64. The naming convention changed after the war, because the Emperor of Japan lost “god-like” status in Japan. Also, the modern Japanese essentially adopted the western calendar. Yet, instead of the Western-style “Model,” the Japanese stuck with “Type” for designating military hardware.

Whereas the assault rifles of the era used intermediate cartridges, the Howa Type 64 was chambered for high-caliber rifle cartridges. Yet, when compared to the M14 rifle, the Type 64 was superior in practical accuracy.

The Howa Type 64 also shared some design similarities with the Belgian-made FN FAL, including a straight-line box magazine. At the same time, the trigger assembly was attached to an angled, ergonomic pistol grip. At 9.7 pounds and 39 inches in length, the Japanese primary battle rifle was neither heavy or light. Rate-of-fire on full auto was around 500 rounds per minute, and it had an effective range of approximately 400 meters.

One significant issue with the weapon’s design was that it was meant to be used with rounds that held less powder to account for the generally smaller stature of the typical Japanese soldier. As a result, the Howa Type 64 could fire the base 7.62x52mm NATO cartridge but not the “standard-load” 7.62mmm round without risk to the internal mechanical components.

One unique aspect of the Type 64 was its selector switch and how it is labeled: first ア (アンゼンソウチ/安全装置/Safety device (Safe)), then タ (タンシャ/単射/Semi), and finally レ (レンシャ/連射/Auto). Together, they spell アタレ (Atare); atare in Japanese means “Hit the target.”

Around 230,000 Type 64 Battle Rifles were produced, and manufacturing finally ended in 1988 when the JGSDF began to adopt the more advanced Howa Type 89. What is notable about the weapon is that it was never employed in any significant combat role, and due to Japan’s strict anti-hardware export laws, the Howa Type 64 has never been exported.

In January 2007, it was reported that the JGSDF’s Ōita Prefecture garrison had encountered supply problems when they could not account for thirty Howa Type 64s that had been lost. Despite a massive search that involved 95,000 soldiers, the rifles were never recovered.

The Howa Type 64 in the Pop Culture

As the weapon can’t be exported, the Howa Type 64 has largely only appeared in Japanese-made movies and T.V. shows. It was first seen in the 1968 film Destroy All Monsters, the ninth entry in the Toho-produced Godzilla film series. The Type 64 was subsequently seen in several Godzilla films.

The rifle also appeared in the 1979 film G.I. Samurai, a story of a group of modern-day JGSDF and JMSDF personnel who are accidentally transported back in time. The personnel are sent to the Warring States period of the 15th to 17th centuries in Japan. Based on a novel by Ryo Hammura, the film starred Sonny Chiba, one of the era’s top male Japanese actors.

Western Films with the Howa Type 64

The only time the Type 64 was in a “Western” production was in The Man in the High Castle. As the series’ first season is in 1962, it would have been a earlier, but perhaps it was developed sooner. The Howa Type 64 was seen carried by Imperial Japanese Army soldiers and Special Naval Landing Force infantry units of the Imperial Japanese Navy as a replacement for the Arisaka bolt-action rifles.

As noted by the Internet Movie Firearms Database (IMFDB), it could be designated the Type 37. The 37th year of Emperor Hirohito’s reign was 1962. It was also suggested it might be chambered for 6.5x50mm Arisaka as the 7.62x51mm NATO would have never existed!

Since the Howa Type 64 was never exported, the rifles carried by the various Japanese soldiers are probably Airsoft replicas. These replicas are made by S&T Armament, a Hong Kong-based Airsoft manufacturer.

Peter Suciu is a Michigan-based freelance writer who regularly covers firearms related topics and military history. As a reporter, his work has appeared in dozens of magazines, newspapers, and websites. Among those are Homeland Security Today, Armchair General, Military Heritage, Mag Life, Newsweek, The Federalist, AmmoLand, Breach-Bang-Clear, Newsweek, RECOILweb, Wired, and many others. He has collected military small arms and military helmets most of his life, and just recently navigated his first NFA transfer to buy his first machine gun. He is co-author of the book A Gallery of Military Headdress, which was published in February 2019. It is his third book on the topic of military hats and helmets.