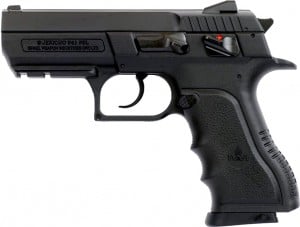 IWI-US is getting ready to ship their new-production Jericho pistols to distributors and availability is just around the corner. IWI-US has announced that they will start shipping 941 9mm Luger models next week with other calibers to follow in the coming weeks afterwords.

The Jericho 941 was a popular take on the trusted CZ-75 design, but sadly, stopped being imported to the U.S. a few years back. Kahr’s Magnum Research picked up some slack with the Baby Desert Eagle, a Jericho variant, but that still left purists without.

While the Baby Eagle is made by IWI, it lacks one critical feature that makes the Jerico so popular: a frame-mounted safety. Both designs incorporate manual safeties, but on the Baby Eagle, it’s on the slide, at the end of the gun’s already small slide serrations.

While some people enjoy and prefer slide-mounted safeties, there’s no doubt a significant number of shooters want their safeties frame-mounted, like on the original Jericho. Thanks to the efforts of IWI-US, the Jerico is about to make a major comeback.

IWI-US is prepping nine Jericho models for sale in the U.S., five with traditional steel frames and four polymer models. The poly pistols will come in full-size and compact sizes in 9mm and .40 S&W and the steel models in 9mm, .40 and .45 ACP in full and compact sizes. The .45 ACP model will only be a compact option.

That being said the difference between the full-size and compact models is slide and barrel length only, they have the same grips and magazine capacity. The barrels measure in at 4.4 inches with the longer guns and 3.8 inches on the compacts.

The 9mm Jericho pistols have 16+1-round capacities, where the .40-caliber guns are 12+1 and the .45 ACP models 10+1. The guns vary a bit by weight, and naturally the polymer models are the lightest. The steel guns weigh about 36 and the polymer guns 10 ounces less at around 26 ounces, making the guns more suitable for home defense and the range and the poly guns better for everyday carry.

The polymer models have one other leg up on the steel models, and that’s cost. The polymer models are priced at $559 where the steel-framed models run a little more at $655. Those are suggested retail prices and most guns list for a good deal less in stores.

IWI-US doesn’t have a project page up for these guns just yet but it’s safe to assume the these new-production models are the same or at least very similar to older Jericho 941 pistols.

The Jericho’s been gone for too long and it’s great to see this attractively-priced service pistol return to the market. If you’ve excited to get your hands on one of these new-production IWI-US Jerico pistols, keep your eyes peeled, they’re about to hit the streets.