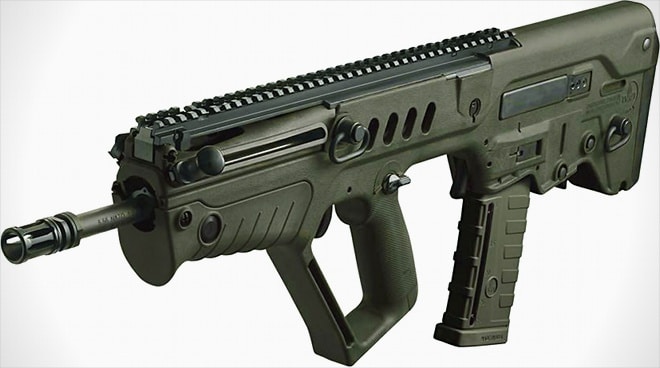 The green Tavors will be offered in two versions, one with a 16.5-inch barrel and another with a longer 18-inch barrel. These are the most popular models in black and it makes sense for IWI-US to lead the green charge with these configurations.

Green Tavors will only be offered as right-handed carbines but it is possible, with a few simple tools and the right parts, to convert them to left-handed bullpups.

These new rifles are chambered for 5.56 NATO/.223 Remington and can be converted to 9mm with a kit. Like the FDE carbines the O.D. green models don’t command a price premium and have the same MSRP as the rest of the standard model Tavors, $1,999.

When the Tavor was first introduced it wasn’t uncommon to see these guns sell for the suggested retail price or more — some people were selling these for well over $2,000 — but today Tavors are usually found for around $1,700 and even $1,600 for people willing to root out a deal, and the green models shouldn’t be too far off the mark.

Otherwise these are built to the same standard as other Tavor bullpups. At the heart of these popular rifles is a long-stroke gas piston system that ensures reliability under the worst possible circumstances. This design has been proven in the field and is breaking down barriers in the commercial market.

The barrels are cold-hammer forged chromalloy steel with a chrome-lined bore for durability and corrosion resistance. The barrels have 1-in-7 twists, 1/2×28 threaded muzzles and are fit with A2-style birdcage flash hiders.

Tavor bullpups weigh in at about eight pounds dry, which is a bit on the heavy side compared to many newer AR-pattern rifles but because the weight is so close to the body they feel light and are very easy to point and maneuver. They measure in with overall lengths of 26.1 and 27.6 inches long for the 16.5- and 18-inch barreled models, respectively.

Like other Tavor carbines these green bullpups ship with one IWI 30-round polymer magazine, also green to match. The rifles aren’t listed yet on the IWI-US website but we expect to see them there soon, along with extra green magazines in the IWI-US web store.

These bullpups are headed their way to store shelves now. If you’re interested, contact your friendly local gun dealer to pick one up in the coming weeks.

The Tavor has changed the way Americans see bullpups. It’s revitalized the market and aftermarket which has been quick to develop accessories including competition-grade triggers and modular handguard systems.

The Tavor has quickly become the most popular bullpup in the game. Depending on how popular these green models are IWI-US may consider rolling out other models for restricted markets as well as other chamberings.