Bloke on the Range and British Muzzleloaders go over some of the evolving equipment of the late 19th century and early 20th century British soldiers and how, based on experiences in the conflicts they had learned hard lessons within, equipment decisions and technologies were adapted and adopted.

For instance. Despite having internal magazine fed rifles prior to 1900, the design didn’t lend itself to high volumes of fire outside of “emergency” situations. The rifles were fed with loose cartridges over top the full magazine which would not be initiated to feed until that emergency. Compared with stripper clip fed designs, which would remain as primary arms through WWII, the rifles exhibited slower rates of fire, clumsier handling, and overall were less than ideal.

This was part of the slow evolution into modern arms away from musketry. While soldiers weren’t lining up in neat little rows to be cut down by machine guns, the rifles were still functionally the single shot of that era combined with a self contained cartridge. The interesting thing is there was plenty of evidence starting to accumulate that fire rate mattered a lot, and there was tech around to support higher fire rates.

Perhaps the most poignant example of that was the M1 Garand, from a practical standpoint the bolt actions it was put up against were peer rifles if you base the comparison on caliber. Everyone was using a “.30” caliber, roughly, during WWII. But the Garand’s rate of accurate fire was astronomically higher, and that was highly effective given its peer group.

But anyway, I am blathering on. Enjoy the video of the arms period evolution. Give the Bloke and BML likes and subscribes too. 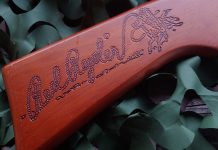