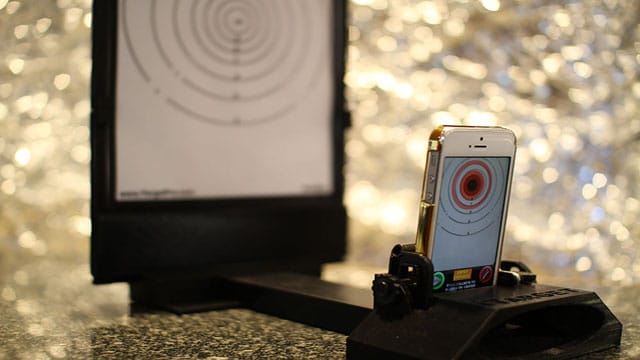 A new laser target practice system is making its way to consumers, currently being crowdfunded over on Indiegogo.com.

iTarget is a three-part system consisting of a “laser bullet” cartridge, a laser sled to hold a smartphone and an app for each of three shooting games.

Using iTarget, a shooter can use their real firearm to work on trigger control and reset, as well as speed. Two of the games offer timed exercises and are meant to train accuracy and speed.

Joe Crouch, an app developer, got the inspiration for iTarget from his wife, who was squeamish about learning to shoot with a live firearm. Joe wanted her to learn to use their home defense gun. A laser system seemed like a good start, but they’re quite pricey. So, he invented a solution.

With iTarget, even the “bang” sound is replicated, to a safe extent, through the smartphone speaker. Set in the sled, the smartphone keeps track of shot placement and time, while the sled not only holds the phone in place, it also amplifies the speaker by virtue of its shape.

The only thing missing is recoil, something true of existing laser systems.

iTarget’s laser bullet is the interface between app and shooter. It’s inserted into the chamber, and has a firm but rubbery surface where the primer would be. This “reads” firing pin hits. The app translates the hits to a target display, and records them for future reference or competition. Crouch is making laser bullets for 9mm, .40 S&W, .45 ACP, .38 Special, and .223.

Being rimless, the laser bullet doesn’t eject when the slide or bolt is cycled. It must be removed by pushing a pencil, or in the case of .223, probably a cleaning rod, down the muzzle through the barrel.

There are three apps, priced at $9.99 each, which will be available through Itunes or Google Play. There’s the Bullseye app for basic target practice, the Quick Draw, which gives the “draw” command and then displays both accuracy and time under the virtual hole in the target, and High Score, which gives the shooter two seconds to shoot one of five numbered circles which the app calls out.

Crouch’s most popular introductory deal is $89 for the first 100 orders of the iTarget laser bullet/sled set. There are other packages shown on the crowdfunding page.

According to the product description, funds up to $75,000 will be used for manufacturing molds, finalizing deals with Apple, and working with software developers to ensure compliance with brand-specific requirements.

Joe Crouch’s invention seems poised to make laser dry fire practice accessible to many more people than it currently is.

Also unlike other laser systems, this one uses a real, fully functioning gun. That means a superior experience to using a replica, so long as safe handling practices are part of the training.