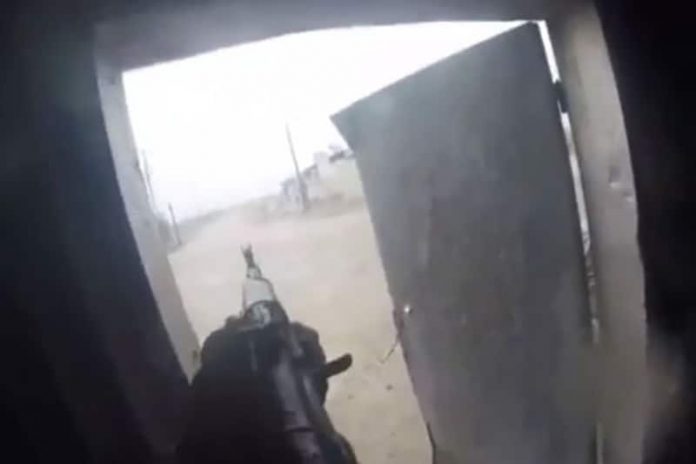 Islamic State have released a shocking video game-style ‘first person shooter’ film footage from Iraq in their latest propaganda move. It shows fresh from the battlefield clips of the terror thugs fighting unknown assailants – shot from the viewpoint of the fighter.

The 20-minute long video features raids, missile launches and a capture of a weapons’ haul- and even what it is like to witness a suicide bomb attack. In the edited clip shown by Mirror Online, a group of camouflaged men can be seen entering a rickety shack – or factory outbuilding made of corrugated iron – apparently in search of something… or someone.

Gunfire can be heard on the audio soundbed alongside flashes of bright light where the gun the cameraman is wielding is discharged several times. It is not clear if anyone is shot, caught or injured in the fracas – or if the fighter is just ‘showing off’ or trying to scare someone.

He then peers out of a door screaming wildly and firing his gun – similar in looks to an AK-47 and from the sound of it, certainly capable of firing single shots and semi-automatic rounds. As the footage then plays out and the fighter explores the location the scene will be reminiscent to many as looking like something out of a video game – but it is far from fun to watch.

The accompanying soundtrack is a well-known ISIS Nasheed (a kind of hymn) synonymous with some of their combat operations. It has been used in some of their most brutal military operations and massacres.

The rest of the video – which the Mirror Online has decided not to screen – begins with drone-shot aerial footage that first identifies and then depicts a giant explosion in the distance. Huge puffs of smoke can be seen about two miles away.

It then switches to show a heavily-armed armoured convoy of masked militants travelling through muddy wasteground.

There is at least one tank among the armoured vehicles – which number at least a dozen, some carrying heavy artillery that look capable of firing at aircraft. Several fighters can be seen in trucks apparently celebrating some kind of victory by waving their arms and fists and smiling and chanting.

The fighters are seen raiding an enemy arms cache , their arms full of rifles, yelling: “Look what the cowards have left us!”

The convoy passes by a number of burnt out wrecks while it apparently goes on patrol. Soldiers disembark and start firing around brick walls at undisclosed targets. At one point an ISIS fighter can be seen standing over a charred human corpse of an enemy fighter – still burning in flames, possibly from being hit by a rocket – and pointing at the unknown victim proclaiming “we will burn all of the crusader army, just like we have this Kafr”.

The group appear to be well stocked with ammo as they appear to not be sparing any bullets. One short clip shows a flat bed truck piled high with weapons – a supposed cache they have seized. Another truck has been modified with heavy steel armour – with thick several inch steel and grills and lights on the front.

Mortar rounds are also fired at unknown targets – together with heavy duty machine guns either held by fighters or secured on the backs of trucks. Large plumes of cloud can be seen rising in the distance from undisclosed targets.

At another point a prisoner can be seen being held up to camera and forced to speak. It is not clear what he is saying.

Towards the end of the video fighters appear to be in pursuit of a vehicle – firing rocket propelled grenades (RPGs) and some kind of shoulder-mounted missile launcher which looks like the type which could down a helicopter. Tracer fire from weapons shows how close they come to it – and seconds later a vehicle can be seen burning in flames.

The video – which continues with further scenes of sporadic shooting and vehicles being targeted – was released to ISIS channels by its ‘Wilayat al-Anbar’ media centre in Iraq.

Past ISIS attempts to produce propaganda have backfired – like when a fighter captured the moment he died on his headcam. On that occasion the militant’s first-person view ended with a pair of trainers in the frame after the shot thug tumbled to the ground.