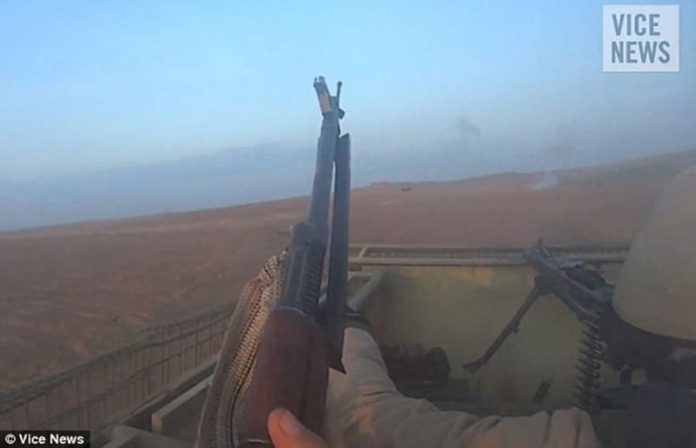 The militants from the self-proclaimed Caliphate likes to portray itself as a well-trained fighting force that makes sweeping territorial gains with ruthless efficiency. But behind that claims and its propaganda machine, the reality is anything but – as this battlefield video shows.

Taken from the headcam of an ISIS fighter, it captures the chaos among a group of hapless militants as they fumble around trying to fire weapons at Kurdish forces in Iraq.

Apparently, a bunch of militants is driving the armored vehicle while the bullets fly past them. The militants onboard bicker and moan at each other while they are surrounded with rocket launchers and AK-47s.

The video, obtained by VICE News, shows one of the militant firings a machine gun perched on the side of the armored vehicle, but at one point the weapons slip. Another militant scream at him to be ‘careful not to shoot at our brothers!’ – referring to other ISIS armoured vehicles ahead of them in the convoy.

The militant continues firing his assault rifle, but is promptly barracked by another who yells: ‘The bullet casings are hitting us! Be careful, Abu Abdullah!’

In the bedlam, one fanatic demands a rocket launcher, but is asked by a confused militant: ‘The rockets for firing at people or armored vehicles?’

He eventually grabs hold of one and rises unsteadily to his feet with the weapon balanced precariously on his shoulder. When he delivers it, smoke and debris showered their vehicle and the force appears to knock the fighter wearing the head-camera to his knees.

One shouts: ‘Good job, but you roasted us, too! What is wrong with you, Abu Hajaar?’

In another attempt, the fighter has to be reminded that the safety cap is still on the rocket launcher. Moments later, their vehicle is struck by a Kurdish rocket, killing the driver.

The others jump out as the vehicle bursts into flames, but the headcam militant is taken out as he tries to escape, shouting: ‘I’ve been shot!’

The camera footage was later retrieved from the battlefield, around 30 miles north of Mosul in Iraq and it deliberately shows the confusion and low-level of training at the current ISIS forces.