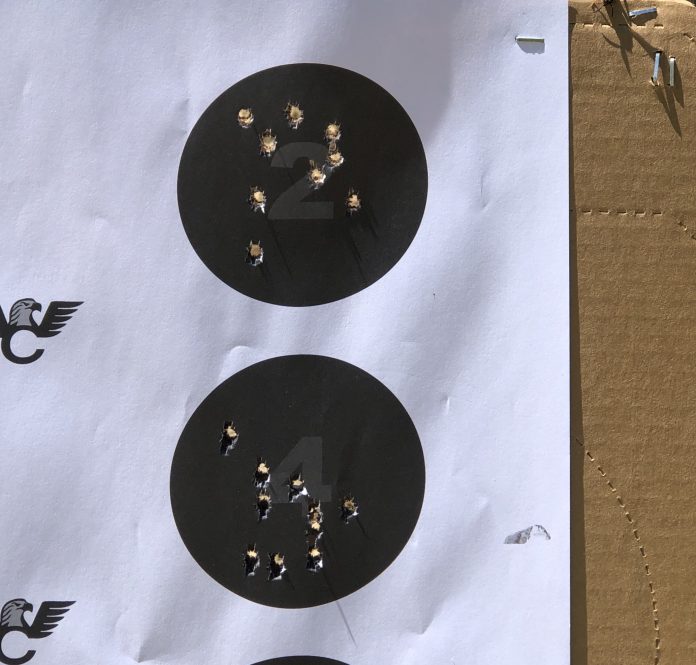 One of these groups is the IWI Tavor X95, 13” Barrel, and Geissele Trigger Pack and Bow.

The other is a 20” FN, with Geissele SSP Trigger.

Accuracy standard of the M4A1 using M855A1 62gr ammunition is 4 MOA (target) to 6 MOA (minimum acceptable). Note this as an accuracy control standard. Keep in mind that M855A1 is a more accurate round than both M855 and M193 out of 1:7 twist guns.

The 1:7 twist rate of military rifles was selected for M856 Tracer ammunition. Tracer rounds are longer than their equal mass counterparts and require faster twist rates for ideal stability. 77gr ammunition flies better out of 1:7 barrels than 62gr or 55gr, not only because of the increased mass but because the projectile is longer and better interacts with the faster rifling.

So, all of that control information in place, and with two rifles (3 actually, you’ll see when I can finish filming and editing) with NATO military type barrels, optimized triggers, and magnified optics, we produced nearly indistinguishable 10 shot groups with the most popular commercial .223/5.56 load. That load being any roughly M193(ish) 55gr ammo.

The X95 is accurate.

The X95 is also a different animal to shoot, in a comparable way to a double action revolver or TDA semi-auto 9mm being different than a single action pistol like a 1911. Even the difference between a polymer frame and alloy frame gun of similar types are different animals.

So what are the most common X95 accuracy hindrances? Why aren’t you grouping well with the X95 like your *insert conventional rifle design*?

A. Support
B. Trigger Manipulation

Let’s talk Support first because it’s probably the easier one to visualize.

You are holding a rifle that is a drastically different shape and it’s reduction in size has been along the length and axis that you are able to exert the most detailed control along.

What do I mean?

Simple. The further forward you can put a control/support point for a rifle the more detailed and minute your body movements will be in influencing the specific direction of the muzzle.

The easiest example of this is a bipod.

If the bipod is right next to you then, even as it’s providing you an extra control point on the ground or bench, it’s still allowing more movement of the muzzle based upon how your breathing and natural movements are changing the position of your shoulders and the rifle stock that is braced into your shoulder.

If you move that bipod to the muzzle you change the angle of the seesaw, as it were, and all your body movements result in less overall muzzle movement. There are bipod designs that go beyond the muzzle for this very reason because you’re using the greater distance between your main control/support points (shoulder and bipod) to your advantage.

Now take the bipod out of the equation and use a normal supported prone firing position. A conventional longer rifle will always have the advantage on where you can put your forward control/support point and how much the movement of your shoulder influences movement and angle of the muzzle.

So, plain and simple. You move the X95’s muzzle more for every slight movement of your body and the easiest way to see this result on paper is to shoot prone or off the bench.

People will often note that their practical accuracy with the X95 compared to most other rifles shifts back to roughly parallel when they aren’t shooting prone or supported. This is because all your control/support points on the rifles and the movements you’re translating to the muzzle are pretty much the same from these unsupported positions.

So, wrapping up support, you must be more conscious of your movement when shooting a short platform. This is the single greatest thing you can understand to improve your supported shooting with this rifle.

The X95’s trigger system is… different, almost alien. This is again because of the length between control points.

The sear to release an AR’s hammer is literally just the front of the piece you’re already pulling on. It couldn’t be closer to your trigger finger. Small distance means small movements translate more. Just like said above for why small movements can move your muzzle more, but that is working in your favor more or less in this application.

The stock trigger also has its own independent return spring. This is why even with the trigger pack gone (which removes the equivalent spring that returns an AR trigger to its forward position) the X95 trigger still has tension and you can squeeze it.

When/If you install a Geissele trigger bow it does away with this independent return spring. I’ll have a separate piece on this whole interaction at some point, too.

So, the long and short of X95 trigger manipulation is that there is (again) more movement involved and you have to be aware of how you are managing that movement until the shot breaks. Your body movements influence the muzzle more and a bullpup trigger requires more internal movement to operate.

You’re also pushing past two return springs, the trigger’s and the Kronk lever’s, making it a long trigger pull. Not overly heavy. Not bad. Just long. It’s why I equate it to a double action versus a single action in handguns.

Successful accuracy with the X95 comes down to one thing. Understanding your movement around the gun.

I’ll get into a couple other factors and the Geissele trigger in the future.