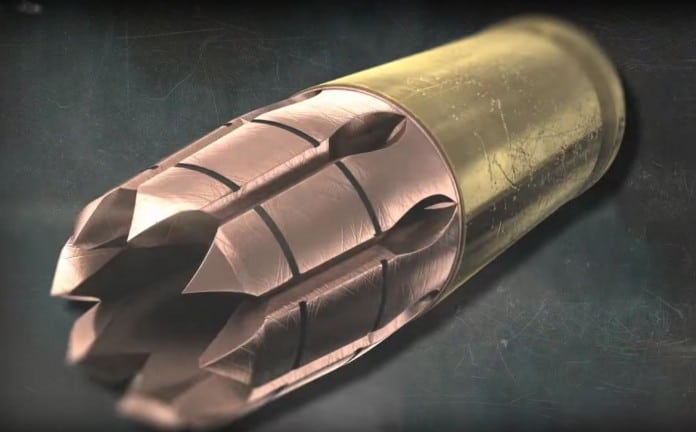 If you haven’t seen it, there’s a new ammo that’s out called G2R Ammo.  According to the YouTube promotional clip I watched, this round is hailed as “The last round you’ll ever need.” Yeah, I’m not so sure about that.

Besides throwing up a little in my mouth after watching the shooter on the video continue to ride the recoil by deliberately keeping the gun up after the shot goes off, this ammo does look rather devastating.  But, as always, time will tell and, speaking of time tested rounds, I’m not really sure what separates this round’s performance from any other dozen examples of well known, high quality pistol ammo.

The Radically Invasive Projectile, as it’s called, can “RIP” through all types of barriers, like gelatin, plywood, and water balloons, according to the video. But can’t most rounds do that? They certainly can. Other rounds can pass through cinderblock too.

Apparently the difference with this round is that it splits up and sends shards of cooper fragments everywhere. Okay?  Well, that sounds pretty much like a frangible round to me.

The real difference, however, is that the round is designed to tear apart at certain areas of the bullet and, if all goes according to plan, the fragments spread outward in a cone shape from the bullet’s impact. Still sounds like a frangible round, though a unique one at that and I admire the forward thinking. I also highly contest the assertion that this is the last round I will be needing.

I can see many reasons why and they all have roots in Murphy’s Law: What can go wrong, will go wrong.

During firefights we don’t shoot into ballistic gel.  Where are the fragments actually going to go if I hit a bone? Will the shards and fragments be enough to actually continue to penetrate and cause mass internal damage to organs?  I have a hard time believing they will perform that job every time when I think of what I know about human anatomy and gunfights.

When the round is advertised as the last round I’ll every need, I can’t help but to think of real survival situations, where I have to shoot some wild game to eat. Frankly, I wouldn’t want a bunch of frags in the meat of every animal I shoot because I wouldn’t want to risk accidentally eating sharp metal shards. No, I’d rather have one or more larger wound channels and a bigger piece of mushroomed bullet. Except for shooting waterfowl, I want big holes. Humans can be foul, but we’re definitely not fowl.

Look, I’m trying to be optimistic about this round and consider the positives too. My main pros: the RIP round looks menacing and it’s way cool that someone was thinking outside of the box. Cons: I’m not sure this round offers anything much different than a lead fragmentation round.

I don’t know much about the round’s stabilization either, but I mean, just looking at it, you have to wonder how stable this round will be on longer flights. Sure, it’s only a pistol round, but taking long shots may be necessary to win gunfights.

My other question is, what about feed ramp issues? The design looks like it wouldn’t present too much of a problem, but like I said, time will tell. By the way, I do like the idea of seeing what a shotgun slug in the RIP cartridge would look like.  Kind of like having nine BBs of 00 buck that are initially glued together.

In short, I like the forward thinking, but overall, I can’t yet wrap my brain around it… although it is a pretty round to look at.