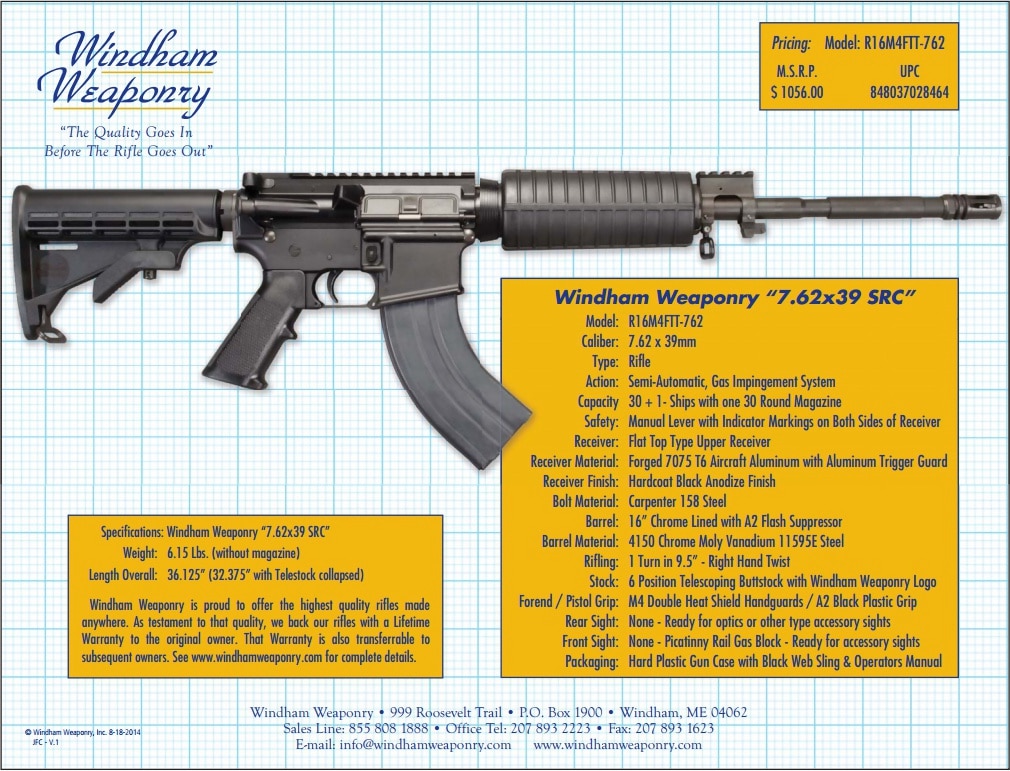 Details and specifications of the Windham Weaponry 7.62×39 SRC. (Photo: W.W.)

Windham Weaponry, nee Bushmaster Firearms, may be old hat when it comes to making guns but it’s a relatively new company that originally focused on a small variety of M4-style AR-15 rifles when it opened its doors just a couple of years back.

The company has made strides over the past few years expanding its catalog to offer a wide variety of AR-pattern rifles and the new 7.62×39 SRC goes even further. Chambered for the popular AK cartridge, this SCR rifle shoots 7.62x39mm ammo.

In a lot of ways it’s not very different from the first rifles to be made with the Windham Weaponry name. It’s a 16-inch carbine with an M4-profile barrel, carbine gas system and A2 furniture, just one simple deviation and welcome upgrade, a receiver-height railed gas block.

This gives users a full spread of options when it comes to optics and iron sights without stepping up to a more expensive free-floating handguard.

The rifles are otherwise MIL-SPEC rifles with 7075-T6 hard-anodized aluminum receivers, assembled with a 4150 chrome-lined chromalloy steel barrel, Carpenter 158 bolt, M4 double-heatshielded handguards, A2 flash hider and furniture and one 30-round magazine where available.

These carbines use the standard direct impingement method of operation for AR-15 rifles.

The barrels have 1-in-9.5-inch twists for use with all common 7.62x39mm loads. These are “optics ready” carbines meaning they leave sight and scope selection up to the user. Being a very personal decision, this is generally for the best and it also helps keep the price down.

Unloaded the rifle weighs just 6.15 pounds and measures between 32 and 36 inches depending on where the six-position stock is set.

Speaking of prices, the 7.62×39 SRC has a suggested retail price of $1,056. Windham products regularly list for considerably less than MSRP and we expect real-world prices to be in the $800 to $850 range.

The once-Soviet 7.62x39mm cartridge has been openly adopted by American shooters. It’s affordable, commonly-found, and proven as a great all-purpose round whether it’s plinking, self-defense or hunting popular game.

While 7.62x39mm ARs aren’t a new thing, early designs had flaws and often used sub-standard bolt manufacturing methods. These lead to failures and a bad reputation for ARs chambered for this otherwise excellent cartridge. We expect that rep to change with Windham in the 7.62x39mm game, and hope that they have more in stock for this cartridge in the future.