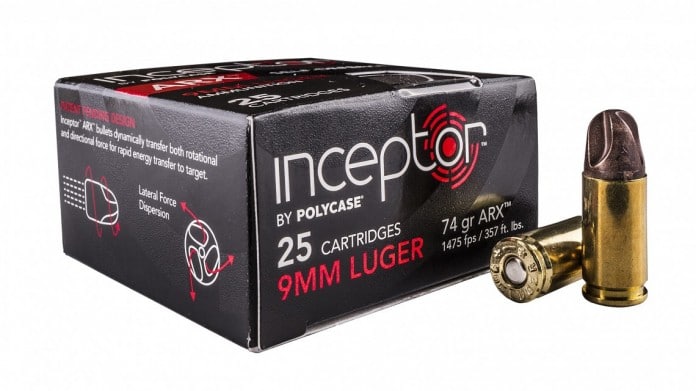 We tend to be a conservative bunch, those of us in the shooting sports. Usually, changes in hardware, rules of the game, production methodologies and even sales strategies come about slowly – but they do come. They are inevitable — sometimes inexorable.

The newest offering from PolyCase is its ARX copper-polymer fluted bullet mounted in a brass case. Conceived as a self-defense round, the ARX is a non-expanding, lightweight, high-velocity round designed to create massive temporary cavities upon impact with soft tissue. With these products — and more on the way — PolyCase is out to challenge everything you know about ammo.

Paul Lemke is founder and CEO of PolyCase. His young company recently made a splash — no pun intended — sponsoring a riverboat cruise on the Savannah River during the National Shooting Sports Foundation’s Industry Summit in June. The summit took place only a few miles from the PolyCase production facility in Savannah. Lemke went out on an expensive limb to sponsor the cruise, which included drinks and hors d’oeuvres for hundreds of NSSF program attendees, because he believes the technology PolyCase is spearheading is part of the solution to broad changes looming for the shooting sports.

And so it was time for Shooting Sports Retailer to get to know Lemke and the innovative technology from PolyCase.

SSR: What path brought you to the shooting sports, Paul?

Lemke: After graduating from the University of Wisconsin – Stevens Point, I joined the Army and went through Ranger School. Because my college specialties were international relations and political science, I spent most of my time as a “strategic soldier,” providing security assistance in Latin American embassies and working with foreign military leaders.

At the time we were mostly concerned with combating narco-terrorism. Several times I heard other officers say guerrilla forces would scrounge brass cartridge cases after a firefight. They would then reload the cases and use them against government troops. We theorized about case-less ammo and one-time-use cases, but the cost of research and development and start-up production was very high. Plus, everyone was afraid that a one-shot case might require a whole new weapons system, and no one could afford to go down that road.

In 2011 I retired from the Army as a Lieutenant Colonel. Daniel Defense, which has manufacturing facilities here in Savannah and just north on Interstate 95 in South Carolina, offered me a job promoting international sales. They soon discontinued that effort, but my family and I elected to remain in Savannah.

SSR: So you started PolyCase in response to a specific, expressed need?

Lemke: After I retired, I got interested in looking for suitable materials to substitute for brass cases. Several companies had looked into this already but had failed because they couldn’t make polymer cases to military specifications. I decided not to go that way, not to require that our product be Mil-Spec designed and manufactured.

Anyway, I started PolyCase with the idea of building a serviceable single-use bullet case. I learned that it’s very difficult to use copper-jacketed bullets in polymer cases. It’s just not an easy fit; it’s not ideal. That led to the development of bullets made out of similar materials as the cases, materials that would have the right relational bond, and then developing polymer bullets for existing brass cases.

SSR: Then what is PolyCase today? What is the company’s direction?

Lemke: PolyCase Ammunition is an injection molding company with more than 90 years of combined professional experience. We develop, manufacture, market and sell world-class, patent-pending, small arms ammunition and projectiles designed for personal defense, discerning professionals and sports shooters. Our products are produced here in Savannah using advanced design, materials and manufacturing experience. Because our bullets are injection-molded, we can make them any shape we want and we can go from concept to prototype in a week.

The PolyCase team consists of experts in engineering and precision manufacturing; in ammunition research, development, testing and evaluation; and in domestic and international marketing. We have a tie-in to a research and development facility in Barcelona, Spain, where they also perform some initial testing and evaluation, prototyping and tool-making. But the product is 100 percent American-made.

We’re been in the business of injection-molding precision parts from cutting-edge materials. These days, everyone talks “cutting edge” and “space-age,” but our Gravi-Tech polymer-metal composites from the PolyOne Corporation offer a substantial high-performance alternative to traditional metals. What makes PolyCase unique is our patent-pending manufacturing process for copper-polymer-based materials.

High-density polymer-metal compounds can even mimic the look and feel of metal, while providing the design flexibility and processing ease of thermoplastics. Gravi-Tech compounds can be directly substituted for lead in ammunition — or in nuclear medicine transport containers, X-ray tube housings and radiation-shielding material.

For the past five years, our focus has been to develop a technology that delivers efficient, lightweight, accurate, corrosion-free and heavy-metal-free ammunition. In the PolyCase manufacturing system there’s no heavy metal waste stream, and we are an entirely lead-free product.

SSR: So PolyCase has branched out from the initial emphasis on single-use polymer cases into ammunition?

Lemke: Right. And eventually that led us to invent the ARX bullet. We learned also that copper-polymer bullets not only perform well in polymer cases, but also crimp normally into brass. This has helped take ARX into civilian markets because, frankly, brass has been around for a very long time and it’s easier to get technology out to shooters using that medium.

SSR: You’re saying we shooters are a conservative community?

When we decided to take our polymer matrix bullet to market, we opted for brass cases to introduce this technology to the consumer. Brass isn’t necessarily more effective, but it’s more palatable. It’s been used for 140 years and it’s comforting. With the new ARX, because it is a non-expanding bullet — by design — we needed to partner with a technology that’s proven and been around for a long time. So we chose brass.

Remember what I said about polymer cases. They’re excellent but were invented at the instigation of foreign governments who were fighting insurgencies; they wanted to prevent spent cases from being reused against them. Polymer cases weren’t something that U.S. consumers demanded, although I believe they will continue to grow in the marketplace.

SSR: PolyCase has moved from cases to bullets and now to complete cartridges?

Lemke: We’re still doing R&D on polymer cases, but most of our effort now is bullet design and technology. These non-lead bullets have been so well received in the commercial market that there must be a strong yearning by the shooting public for innovation in this area.

SSR: As a replacement for lead, you mean?

Lemke: We’re careful about what we say about lead. We are not an anti-lead company even though our processes and our products are completely lead-free. We’re an injection molding company, and lead doesn’t inject very well. Lead wouldn’t work in our systems.

Look, we know there’s a movement on the West Coast — at least beginning there — to ban lead, and on state and federal properties as well. Part of our mission here at PolyCase, and especially now that we have a range-compliant product, is to give shooters some options so they can still enjoy the shooting sports. That said, and just to summarize, our processes generate no wastewater or heavy-metal waste streams, and our products are lead-free.

SSR: OK, so let’s talk about your ammunition.

Lemke: We have two lines: Interceptor and PolyCase.

The PolyCase line is available only in .380 auto with polymer cases. Using copper-polymer bullets, these cartridges are lightweight, low-friction and low-recoil polymer. The cases deliver the same performance as brass, and everything is built to SAAMI standards. We offer the solid, round-nosed RNP and the new ARX. The result is reduced ricochet bullets, which are range compliant and approved for use against steel targets. The 65-grain RNP has a muzzle velocity of 1,050 fps and energy of 154 ft./lb. The 56-grain has a similar profile, 1,150 fps at 164 ft./lb.

The four-component Interceptor line of copper-polymer bullets use traditional brass casing, but all are designed for performance at high velocity while still being range compliant for steel targets.

Lemke: Our copper-polymer projectiles weigh only about 70 percent as much as traditional lead-core bullets with similar profiles. All things being equal, lighter weight means higher velocities, and this of course results in less bullet drop, less recoil and less muzzle rise. This, in turn, allows quicker, more accurate follow-up shots.

The copper-polymer materials also significantly reduce over-penetration and the chance of ricochet. This helps moderate the risk of collateral damage during home defense situations.

SSR: ARX is your new bullet. Explain its curious design.

Lemke: ARX stands for Advanced Rotational Extreme, and we introduced it in January 2014. It’s a new bullet in every sense of the word, from the way it’s manufactured, to its shape, to the way it transfers energy to the target. To understand the ARX you have to forget nearly everything you’ve learned about bullets.

The ARX is a non-expanding self-defense bullet designed to be tough enough to penetrate soft targets and tissue, but when it encounters tougher barriers it breaks apart to reduce the risk of collateral damage from over-penetration. It harnesses rotational energy and transfers it to a target in a way that is just as effective as expanding hollow points without relying on expansion to transfer that energy. We measured the 74-grain ARX 9 mm at 1,475 fps rotating 109,000 times per minute.

A 9mm ARX bullet traveling 1,500 fps will result in fluid flowing through the flutes at nearly 3,000 fps. The result is a wound cavity in soft tissue that has been compared to that of a .223 75-grain BTHP.

In soft tissue, the ARX will penetrate 12 to 14 inches. We say this bullet is “soft-barrier blind” because it creates cavitation in soft tissue equal to larger hollow point calibers. The result is a very large wound channel.

Even heavy clothing has no effect on the terminal performance. The ARX penetrates straight until it encounters soft tissue, then the flutes in the nose harness the bullet’s rotational energy during the initial six inches of penetration. The bullet begins to tumble in a controlled, predictable fashion that delivers very consistent terminal performance equaling or exceeding conventional hollowpoint designs.

SSR: Paul, if there is just one thing you could impress on the business readers of Shooting Sports Retailer, what would it be?

Lemke: I’m just back home from traveling to buyers’ markets like NBS and Sports, Inc. I’ve signed up lots of dealers and more than 600 stores recently. What matters is margin, and PolyCase can provide an excellent margin with safety — and the customers are hungry for new technology.

If there truly is a handgun argument about weight versus speed, we have come down on the speed side because our copper-polymer matrix bullets are lightweight and very fast.