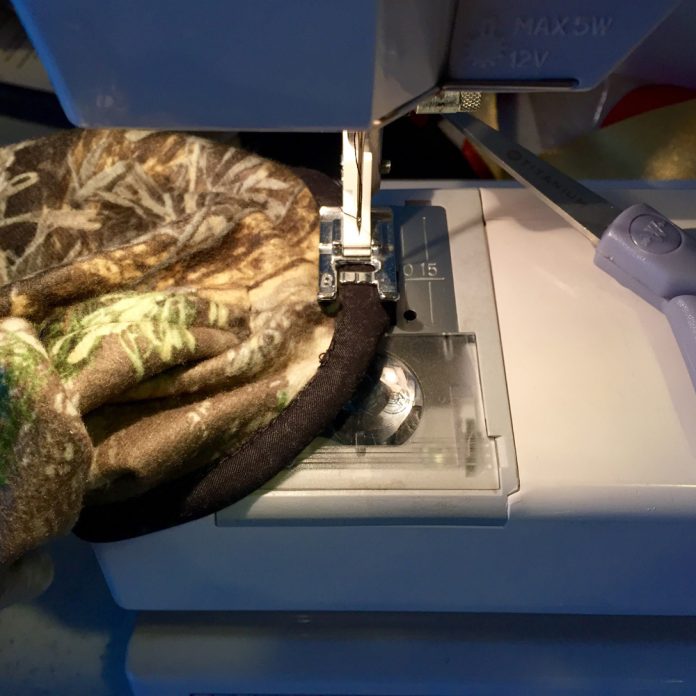 So, I admit it – I’m kind of cheap. It’s hard to shake decades worth of frugality. Raising three children while putting my former husband through graduate school, and then going back to school myself as a divorced mom set a pattern. I don’t fit the “rich doctor” mold. I drive a Subaru and my house doesn’t even have a master bathroom. I’ve had some splurges here and there, but for the most part I live pretty small.

I’m not a cheapskate per se. I don’t mind spending the dollars that it takes to get a good quality shotgun, or holster, or belt for instance – because I have very little patience and a low frustration threshold. I just do not deal well with malfunctions and equipment failures. But when it comes to shooting-specific clothing and gear, I definitely aim to cut corners where I can.

I have short legs and short arms, but the rest of me is size 16-18. I’m not exactly a Hobbit, but I missed the svelte proportions side of the genetics buffet table. So, sewing and alterations skills are a must for me, and that’s where it becomes easiest for me to cut expenses.

Blog readers may recall the two IDPA vests that I sewed for myself out of scraps the other year. I was totally NOT going to cough up the cash for a “tacticool” vest, when I could make one (or two) myself and personalize them. One of those has now become my shotgun vest, because I realized that the pockets are large enough to hold an entire box of shells. Yay – one less thing I had to buy for learning sporting clays.

One of my multiuse personalized shooting vests: 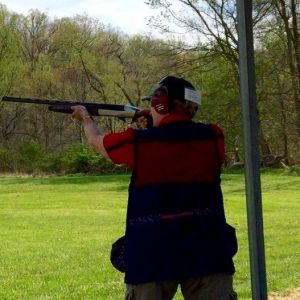 I’m all about finding new uses for stuff I already have. I repurposed one of my kids’ old school backpacks for a travel range bag when I went to Gunsite, and then used the same bag when a friend took me dove hunting. My regular range bag was too bulky to fit in the suitcase, and this daypack was just lying in the basement, so why not? Things don’t have to say “tactical” on the label to be useful – and you often pay extra for that special designation.

A trip through the washing machine cleaned this right up: 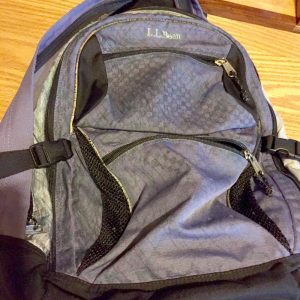 Look for alternatives that aren’t in the shooting department – or are already in your basement, or the back of your closet. I’m still wearing the silk and polypropylene base layers that I bought for skiing back in 2004. (Yes, I have twelve-year old underwear- don’t judge me LOL)  I don’t ski any more, but those old base layers still work great for November/December deer season. They are basic black, not licensed camo, but the baselayer is covered by fleeces and outerwear anyway. The deer don’t have X-ray vision, so who cares? Or maybe they do, since I haven’t bagged my first deer yet after a few seasons. Yeah, that’s what I’ll blame it on – X-ray vision :-)

I admit that I shop in the men’s department a good bit for outdoor clothes. I’m sorry, but there is still a dearth of rugged clothing, proportioned for women, that comes in my size, which doesn’t also cost an arm and a leg. While I have gradually acquired a few pairs of actual “tactical” pants,  the pants I wore when I started shooting matches were Carharts or Wranglers from Walmart. The cost savings was tremendous ($40-50 per pair difference), as long as you know how to dart-in a waistband, and do basic hemming. And with men’s pants, they will often come in a 29-30 inch inseam already, so you may not even have to hem.

The same goes for shooting shirts. If you are are not a sponsored shooter with a pretty jersey to wear (yeah, me neither – LOL), plain T-shirts are fine. If you want to go all “wicking sportswear”, the Danskins line at Walmart works very well. They are even marked down frequently. I stocked up the other year when some stretchy T’s that I use for base layer undershirts (helps keep the brass out of the boobage) were marked down to five bucks each. Five-bucks vs gawd-knows-how-much for UnderArmour? Yeah I’ll shop Walmart, thanks.  I did the same with the Danskins long-sleeve 3/4 zip shirts and fleeces. They layer well for March or October matches. I shoot a lot in Southwest PA, and those months can be freezing or barely above. I need multiple layers plus hand warmers in order to even function at matches in those temps.

You can also find some deals at Sierra Trading Post if you look carefully and frequently. That is where I got my “now ancient” silk base layers. They do a lot of close-outs and factory seconds, so stuff tends to be much cheaper than usual retail prices. They don’t always have my size, but it’s always worth a look before I spend big bucks for a similar thing somewhere else. I’m addicted to Smartwool socks, for instance, and that’s mostly where I get them.

Then there is camo. With starting the learning curve of crossbow and upland hunting last fall, I had some more shopping to do. I did finally find some women’s camo shell pants at Dunham’s (discount sporting goods) on pre-season sale, for which I also had a 20% off coupon. But I had to figure out a way to hem them up several inches without losing the drawstring bottom cuff. I suppose with the drawstring, I could have left them alone, but the MC hammer look just doesn’t flatter me. I also found a shell jacket that matched those pants, and had a 20% coupon for that as well, (thanks to a helpful clerk who had a stash of them – it pays to ask, especially if they keep flyers at the register).

I mentioned the cold, and to that end I found a camo fleece – again at Walmart – for cheap. It was generic woodland camo, and it was in the men’s dept, but it was only nine dollars. In contrast, the licensed camo pattern women’s fleece in the sporting goods dept was twenty. Yes, the sleeves on the generic men’s version were too long, but putting elastic in the cuffs solved that problem. And yes, it wasn’t Cool Licensed Camo TM, but if I’m going to layer a shell over it anyway, who cares? This elastic sleeve trick also works well for the Danskins fleeces that I mentioned above. You don’t need to have a sewing machine to do that either – that can be a simple needle and thread project.

Despite my affinity for off-brands, I did find an incredible name-brand deal in an unlikely place last fall – At Prois.  I love the fact that Prois has top quality stuff designed for women. The problem is that it also carries a top quality price tag. I have been just too “cheap” to spring for it before now, especially since I am still on the hunting learning curve, and unwilling to spring for top of the line gear for an activity that I do only infrequently.

But, cruising their site last fall, I noticed that Prois had their Pro-edition jacket marked as a factory second — because the cuff trim wasn’t sewn on properly. That made the price $100 instead of $240, and then I had a $25 visa gift card lying around that I never used. A 200-plus dollar jacket for 75 bucks plus shipping? Yes please. Five minutes of sewing later, I was a winner :-) I wish Prois’ factory supplier would make a bunch more mistakes like that. 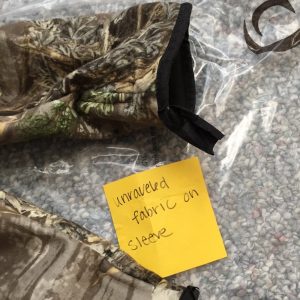 Recently, I started another sewing project that is saving me big bucks. I wanted some camo fleece pants for a ladies duck hunt I am attending in November. Cabela’s had camo fleece elastic waist pants for fifty dollars. That was a “no” – because I realized that my favorite fabric store chain was running a fifty percent off fleece sale that same weekend. The fabric sale, combined with a pattern for pajama bottoms that I already had, and – Ta daah! – camo fleece pants. I even had enough left over to combine with other scraps I had, to make a pullover jacket. I’m not exactly a “hoarder”, but a fabric scrap has to be pretty small for me throw it out. That mentality has saved me a load of money over the years.

My “bonus” jacket from leftover fleece: 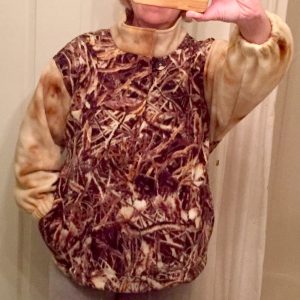 All of these little savings don’t sound like much, but they can add up to hundreds of dollars over the course of a season. If you aren’t a sponsored shooter and are playing on your own dime, or you are just getting started on a limited budget, every little bit helps. This may even be a make-or-break proposition for a mom who is trying to squeeze a new hobby out of an already stretched family budget.  The possibilities and savings are endless – if you pay attention and use a little ingenuity.