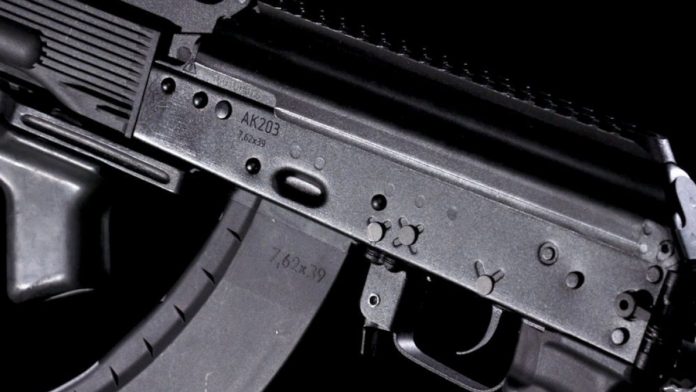 The AK-203 is an update to the classic Kalash line that includes much more polymer and better ergonomics while keeping the same AKM-style action and caliber. (Photos: Kalashnikov)

Home of the world’s second-largest military, the dedication of the Indo-Russian Rifles plant at the Korwa Ordnance Factory received wide media coverage both locally and abroad, with Modi saying the move was a boost to the government’s “Make in India” initiative on defense goods while providing much-needed arms.

“The AK-203, that will be manufactured in Amethi will strengthen our armed forces and help them fight terrorists,” said the Prime Minister at a time when border tensions with Pakistan over Islamic terror groups, which came to blows last week, are at a height.

The plant, of which Kalashnikov will have a 49.5 percent stake, is slated to produce upwards of 700,000 AK-203s for the Indian military. Part of the government-owned Indian Ordnance Factory Board, which controls the majority of the new venture, the concern will be headed by an active-duty general in the Indian Army. The AK-203 has a traditional bayonet lug, can support suppressors capable of mating to its muzzle device, and can accept an under barrel grenade launcher such as the GP-34

A new take on the AK-100 series currently used by Russian Special Forces, the AK-203 features a folding adjustable buttstock, a more ergonomic pistol grip and a selector with an additional tab for the trigger finger. The receiver cover is hinged on the rear sight block and the rifle has Picatinny rails on both the upper and lower handguard. A birdcage-type hybrid flash hider/compensator is standard.

TASS, Russia’s state-owned media organ, reported this week that Russian President Vladimir Putin stressed the joint venture was a symbol of friendships between the two countries.

The rifles will eventually replace the Indian Army’s domestically-made 5.56x45mm INSAS and imported AK-47 variants. New Hampshire-based Sig Sauer last month won a tender to provide the service with over 70,000 new SIG 716 rifles in 7.62x51mm NATO for use by elite units. The country also has thousands of more outdated FAL copies and bolt-action Lee-Enfield rifles on hand for reserve and police use.