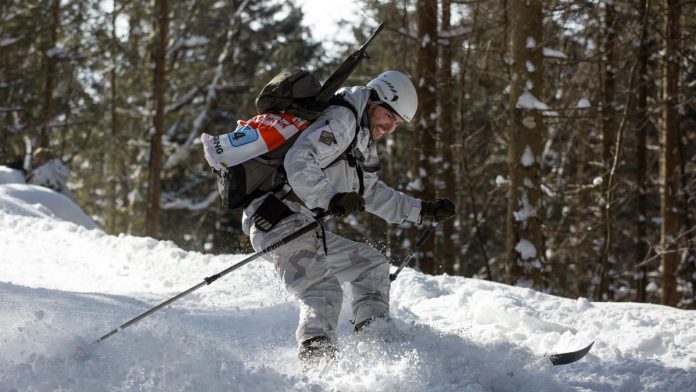 A recent event in the Alps attended by European military teams had all the cool things you look for in a ski movie. The International Mountain Warfare Patrol, conducted earlier this month, pitted 15 teams from Germany, France, Italy, Austria, Poland, and Slovenia in a 30km race through the snow-covered mountains around Chiemgau Arena.

Yet, it wasn’t just skiing around the bunny slopes looking for hot chocolate stands. Competitors had to stop to engage targets with small arms fire, toss grenades, rescue the “wounded,” and complete avalanche excavations against the clock. The exercise yielded a host of great images that look like they came right from Hoth. How’s that for a starting pistol? Apparently, the Germans dig wheelgun Wednesday The French team looking…like they are going to come in fifth place. Chiemgau Arena near Ruhpolding, Bavaria, is where the Biathlon World Cup is often held. It also doubles as a jigsaw puzzle model. On the hand grenade station, competitors had to stop, chuck a practice grenade 15 meters while kneeling until the team landed 18 “Eier” in a two-foot target circle. On the rifle stages, competitors had to shoot five rounds at a 50-centimeter target 50 meters away with misses adding a penalty of 30 seconds. Rooting around in a simulated avalanche The dedicated three-battalion German Army mountain infantry brigade, Gebirgsjägerbrigade 23, consists of about 5,300 soldiers trained to fight under extreme weather conditions. The home field advantage paid off in this month’s Patrol event, as Gebirgsjägers claimed the top four spots with a French team coming in fifth.

As a side, to move equipment around the mountains, the Germans still maintain pack mules in their mountain infantry brigade.

The same type of ski-mounted alpine troops has long been a facet of mountain warfare in Europe, with specialized units such as the French Chasseurs Alpins and Italian Alpini battalions dating as far back as the 19th Century. During the 1939-40 Winter War between Finland and Soviet Russia, fast-moving groups of ski-borne troops armed with Suomi submachine guns wreaked havoc on Red Army columns, darting from the deep forest to attack the road-bound Russkis and then disappearing just as fast.

Of course, the winter shooting sport of biathlon, which evolved from the Nordic military patrol, debuted in the 1960 Winter Olympics and has been going strong ever since– although it is dominated by Russia, Scadanavian and Alpine countries. Of course, they wear form-fitting race suits in loud colors and pack .22LR bolt guns, but hey, it’s the lineage that counts, right?